Musings on a visit to Armidale – art and all that stuff

I try, not always successfully, to make Wednesday my Australian day, something that links to Australia life  or history as compared to the more serious stuff that sometimes dominates this blog. And who could blame me for wanting a break? Or you, for that matter.

First, a challenge. kvd thought that more than you could point a stick at was an Australian phrase. The alternative phrase is, it appears, more than you can shak 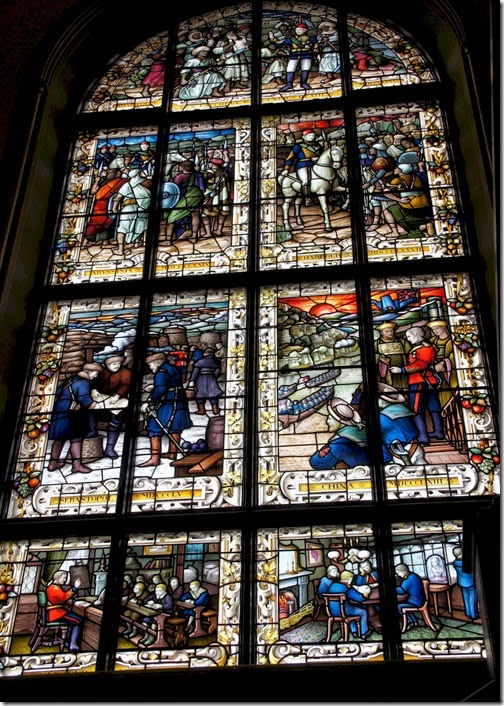 e a stick at. As best I can work out, its not an Australian origin phrase at all. Anybody know the derivation?

Friday morning last saw the launch of Came to New England, a book written to mark the 75th anniversary last year of the New England University College. I had been looking forward to it, a previous launch attempt had to be cancelled, but it left me feeling a bit moody and reflective.

Came to New England is very different. This is a bottom up history, with thirty-seven contributors (staff and students) recording their perceptions of the place. My two chapters were context chapters, still personal, but providing part of the historical context.

The group at the short launch ceremony was relatively small, all authors apart from the small official group. Some had come considerable distances. Most were older than me. One price of the Dawkins reforms is just this: institutional change to the point sometimes of destruction so that those with the greatest and most intense memories of university as a place of intellectual, social and cultural change pre-date Dawkins. Its not just UNE, although that institution was more than others damaged by the changes. It seems to be almost universal. For many, universities have become places to pass through, not be immersed in.

The launch was held in the Booloominbah foyer in front of the Gordon Windows, a spot I have known well over many years. It was also a place my father knew well 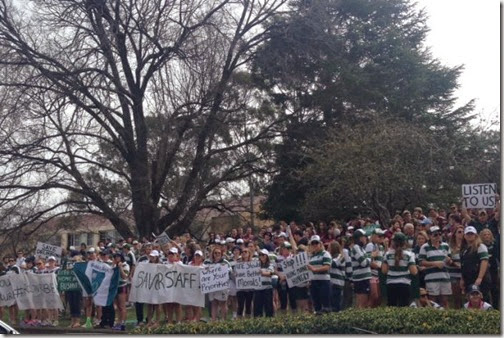 living in the big house after he arrived as the first NEUC staff member in 1938, as did my mother who remembered it when the house was still a family home with old Mrs White in residence.

I enjoyed talking to people, catching up, but I noticed the gaps, those who would once have attended. I couldn’t help thinking that this might be the last time I saw some of those there. Who would record the stories ?  I try, but I can only do part.

Walking outside, there was a student protest. Perhaps some things don’t change!

New England is still a strongly residential university, something that gives it a different feel to many larger universities where students travel to lectures when they must.

Proposed changes to university college arrangements had brought the students out in protest. It was a very good natured and well ordered protest. “What do we want?”, was one of the chants. “Communications”, was the response. I rather think that the Chancellor and VC who were at the launch got that message.

I really was feeling moody at this point. It wasn’t just aging friends and colleagues, but also the realisation that for those students this was their place now, that my place lies in the institution’s past. This feeling was accentuated by my own deep connections; my earliest memories are connected with what was NEUC; the portraits and photos on the walls are friends of my parents or grandparents or, in some cases, my own family; I played with their children or grandchildren; it is my place in a de 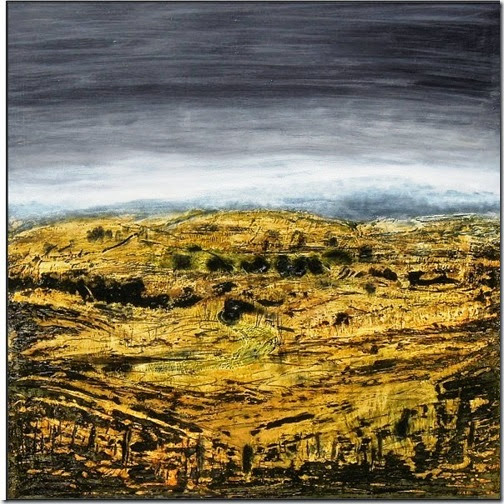 eply personal sense. I become old not because of my age, but because I am part of an increasingly tenuous link between present and past.

Shaking the feeling of gloom off, I went up to the New England Regional Art Museum to look at the latest exhibitions. I got very excited by the new exhibition by Anna Henderson. This painting is called Basin Road.

I rushed off to find out about her. “Is she from Inverell”, I asked? They checked. No, she is living at Guyra. Still, that’s nearby.

The friend who was with me could not quite understand my excitement. It was partly a personal connection, for one of the paintings was called Oakwood. That was the district where the property was that my grandfather took up management on a newly subdivided block, where he brought his new bride in a spider sulky. But it was also an artistic connection, the representation by different painters of the changing colours and patterns of New England.

I couldn’t explain that. I realised that I lacked the visual language and indeed the context to explain properly. This was a real frustration. If I who know can’t bring it alive, who will? I can explain the paintings to some degree in artistic terms, but I can’t presently explain the shad 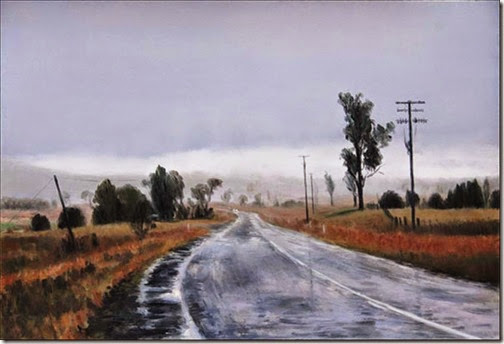 ings that show difference across land and style.

This painting by Walcha artist Julia Griffin is called simply Rain on the Uralla Road. It is a scene that I know so well. I have driven it many times.

I find that it is of continuing importance to me explain, to justify if you will. Justify?

I want to explain to people from my own perspective why these things are important. I am not saying that they are important from a global or even Australian perspective. But it would be nice to explain to locals that they have a culture  that is varied and constantly evolving.  It would be nice to make that culture whether it be expressed through music, film, literature or at available to a broader audience.

Call it a dream if you like.  But it would be nice.

To misuse an old hippie phrase "if you can remember the 60's you weren't really there" - I'm thinking it might equally be applied to university days?

Jim, you should have provided a link to that book you contributed to; sounds like an interesting read.

Mmm! But we did/do remember. The buy button is there, but will find out about direct purchase and post link.