Reflections on the art of flânerie 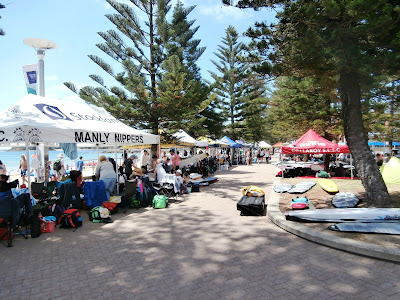 Introduced to the concept by a friend, there was a time when I was a most dedicated flaneur. Then I drifted away a little, although I introduced a remarkable number of people to the concept.


Surf Carnival, Manly. To be a flaneur is to idle without purpose, interested in what you find.

I think one of the reasons for my decline in flaneuring is that I started walking for exercise. This may be healthy, but it tends to defeats the point, the discoveries that can come from random idling.

I find that when walking for exercise I have in mind distance and time, two things in direct conflict with the art of flânerie. What's worse, I tend to get very bored and thus stop walking! Even the desire to achieve a minimum number of paces (10,000 per day appears to have become an almost universal target) provides insufficient incentive. 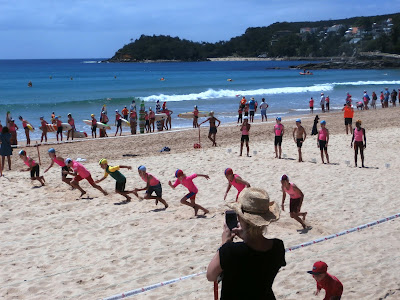 Surf Carnival, Manly. Nippers' race. When practicing the art of flânerie, it is important to stop and observe. The pleasure lies in the discovery of the unexpected.

The irony, of course, is that I actually walked more as a flaneur than as an exerciser because I was simply more interested, was inclined to keep moving.

I rediscovered the art in Copenhagen. After the first trip, I knew the bones of the city quite well. Now I was fleshing in the details.

There is something enormously relaxing about heading out with only a rough idea of direction and time scope. I wandered almost at random, looking a the buildings and shops. Sometimes, I would find myself back at a familiar place and then wander around working out just how I had got there. Finally, I would head for home by the shortest route. 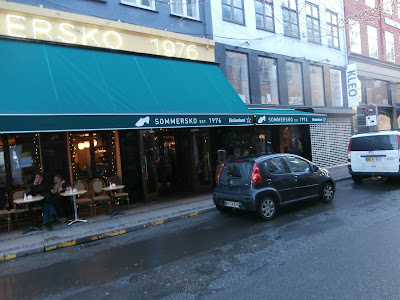 I found Copenhagen's Cafe Sommersko by accident. I had been wandering for well over an hour and felt like a coffee.

I was fascinated by the place. Obviously moderately posh, a restaurant at night, it was starting to fill with casually if well dressed Danes. They knew each other, and hugged or kissed as they unfolded their outer street-ware to reveal the plumage underneath.

Investigating, I found that the Cafe  Sommersko. was opened in 1976 to provide a place for the city's artists to meet, introducing a new cafe concept to the city. I must say they struck me as very well dressed artists! I had enjoyed my rewarding coffee. It was time to move on.

Recently, there seems to have been something of a global renaissance in the art of  flânerie. Recently, my attention was caught by an ABC Radio National program A step by step guide to the city. The program was triggered by a recently published English translation of a 1929 book, Franz Hessel's Walking in Berlin. The book is described in this way:


Franz Hessel was an observer par excellence of the increasingly hectic metropolis that was Berlin in the late 1920s. In Walking in Berlin, originally published in Germany in 1929, he captures the rhythm of Weimar-era Berlin, recording evidence of the seismic shifts shaking German culture at the time.

Nearly all of the pieces take the form of a walk or outing, focusing either on a theme or part of the city, and many end at a theatre, cinema, or club. Hessel effortlessly weaves historical information into his observations, displaying his extensive knowledge of the city. Today, many years after the Nazi era and the postwar reconstruction that followed, the areas he visited are all still prominent and interesting. From the Alexanderplatz to Kreuzberg, his record of them has become priceless. Superbly written, and as fresh today as when it first appeared, this is a book to be savoured.

I clearly have to read this book!. Checking around, however, I found piece after recent piece linked to flaneuring. The concept is clearly in vogue. Perhaps its time for you to practice the art of  flânerie?
Posted by Jim Belshaw at 7:11 pm