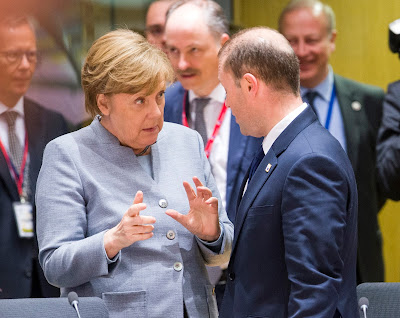 Yesterday 29 April, the EU-27 formally endorsed the EU's negotiating guidelines for its negotiations with the UK over that country's exit from the EU. The photo shows Germany's Angela Merkel in discussions with Maltese Prime Minister Joseph Muscat.

The BBC has some of the best coverage. The links within this story will carry you through to related stories.

The EU focus on a united front was on display and reinforced by the European Council endorsement.

These negotiations were never going to be easy. The UK Government wanted parallel negotiations including trade, whereas the EU is insisting on sequential negotiations with the first key issues guaranteeing the rights of the 4.5 million EU/UK citizens who live in the UK or the EU; the future of the Northern Island border; and resolution of outstanding budget issues. This can be followed by discussions on trade matters.

Completed in 1992, the EU single market allows the free movement of goods, services, money and people within the European Union as if it was a single country. The UK has ruled out full participation, while the EU says it will not allow cherry picking. The trade negotiations are therefore likely to be complicated.

It is quite easy to think of worst case scenarios. In the worst of all absolute cases, the UK suffers major economic setbacks and shrinks to the United Kingdom of England and Wales, while the EU itself largely disintegrates, leaving a gaggle of inward looking nationalist protectionist states from the UK to the Balkans.This combination is unlikely.

I have previously argued that the institutional and economic factors linking the European federation are now so deeply entrenched that they provide a great deal of internal cohesion. My feeling is that the Brexit process is likely to reinforce EU unity and cohesion. This gives rise to the next worst case, one in which UK suffers major economic setbacks and shrinks to the United Kingdom of England and Wales with the EU surviving, if damaged at some levels. I think that the greatest risk to the EU from Bexit is not economic, but a narrowing of view linked not just to the withdrawal process, but to the withdrawal of the leavening effect of UK membership on EU culture and institutions.

Perhaps the absolute best case, the one that some of the Brexiteers hope for (not all: some devoutly look to the nationalist, protectionist alternative), is a reinvigorated UK with the EU remaining a strong economic partner and friend. This, the Brexiteers would say, is a plus-plus solution.

The end result will probably fall somewhere between the two polar points of the spectrum. My best guess is a strengthened EU with a somewhat diminished UK.   .
Posted by Jim Belshaw at 1:06 pm