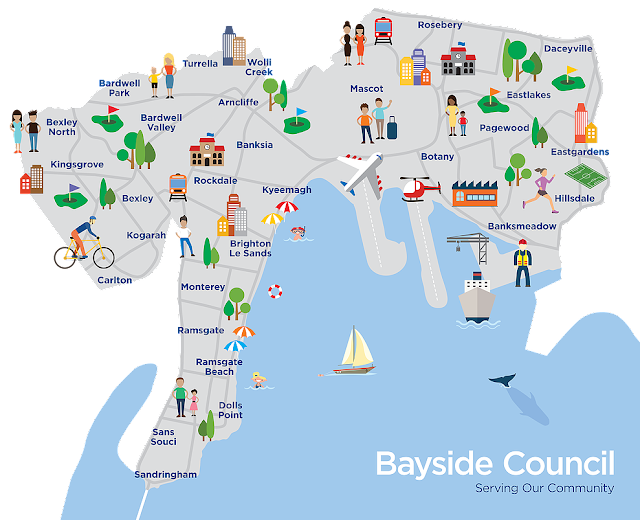 Created in the name of efficiency and improved service delivery  by a forced NSW Government merger of the the Botany Bay and Rockdale Councils, Bayside Council lacks any community of interest.

Today were the first local government elections since the recent round of State Government enforced council mergers which, among other things, created Bayside Council. Voting is compulsory, so I toddled off to vote.

I am in Port Botany Ward.which has some 20,000 people on the roll. There are five wards in all, all roughly with the same number of voters. The forced merger of Botany Bay and Rockdale left deep resentments among Botany Bay Council residents.

The map above suggests superficial unity in that the new council is grouped around Botany Bay, hence the name. What won't be clear from the map is that Sydney Airport creates an almost total divide between the two merged areas. If you were to map communications and transport patterns within Bayside, you would find almost no interaction between the two areas. For me to get to Rockdale by  public transport takes 45 to 75 minutes depending on connections.

I don't like party politics in local government, I feel that it distorts, so as much as possible I vote for independent candidates. Of course many of these do have party affiliations, but they are generally not bound to support the party machine or promote party interests when local and party interests to conflict. As it happened, I didn't have a lot of choice. There were just seven candidates in Port Botany Ward (three to be elected) broken into three Liberals, three ALP plus one independent who actually lived in the Ward. So my first vote was clear.

Checking the other candidates, I found that the the ALP team were all locals, while the Liberals all came from the old Rockdale Council area. I was surprised at two levels. It seemed unwise, given local sensitivities. It was also hard to see how the Liberal candidates could represent constituency interests when they were so far away. Labor were having a field day at the booths on all this. Vote for us as the only local candidates, they said, ignoring the local independent.

All this made voting fairly easy. One independent and then the Labor team in reverse order.

While there is still some counting to go, it seems that Liberal core vote was just enough to get the first Liberal candidate elected in Port Botany Ward. At this point, the position appears to be: