I remain focused, indeed obsessed with architecture and the built environment. This will pass, but for the present I am enjoying the journey! 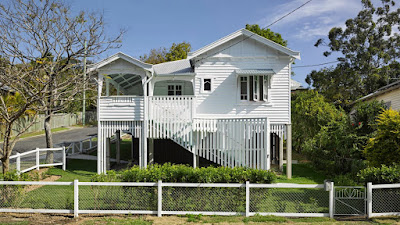 
If you took closer note of the 1910 white weatherboard on an up-sloping corner, you might think that even with that obviously contemporary wedge-shaped rear extension, “it fits”. Auchenflower House hasn’t made any bid for attention in the neighbourhood of character Queenslanders.

But that is the essential point of the project.
As decided by the jurists of the 2017 Houses Awards – one of the nation’s premiere residential awards because the host magazine talks to architects in their own dialect – what Vokes and Peters have done has created a dwelling of “deceptive simplicity”.

It was a curiously unsatisfying article because while I understood the broad point, I couldn't quite work out what had been done and why, However, I did take her point about the way in which preservation of the Brisbane built environment and the traditional Queenslander home had added to Brisbane's visual appeal and livability. 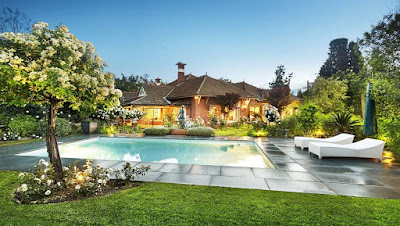 Down in Melbourne,battles have been raging over demolition of traditional mansions in Melbourne's wealthy (and leafy) inner east. This mansion at 9-11 Edward Street, Kew, was bulldozed after a failed attempt to get heritage listing.

Allison Worrall's piece in Domain provides a picture of the battles now raging. The problem is that wealthy buyers who want to live in the area in their own designed modern house are prepared to pay full market price plus demolition costs to gain access to the prestige sites. We have seen a similar pattern in Sydney.

In both cities as well as Brisbane, the search by developers for possible medium to high density sites has also been driving changes to the streetscape and the pattern of living, something I spoke of in Sydney's growth problems - light rail, Kingsford, Pagewood and Daceyville. 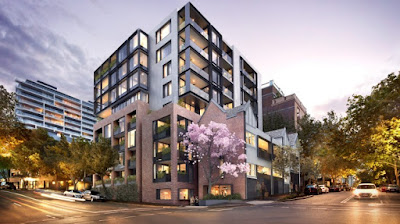 This is an artist's impression of The Hensley, a new development at Sydney's Potts Point. In June 2016, Domain reported that  the plan would involve retaining and updating the twin terrace facade of Hensley Hall, a former boarding house that was something of an area icon, adding an eight-storey building to house 44 apartments. A ground-floor cafe was also planned for The Hensley.

Interestingly, the developers also said that Sydney's controversial lock-out laws had encouraged change in some areas towards inner city residential.

Whatever the plans were in June 2016, the outcome has been the effective demolition of Hensley Hall apart from two facade slivers. The Daily Advertiser report on the fiasco suggests a degree of confusion and mixed signals, with the developers clearly not placing sufficient weight on their original undertaking.   .   .
Posted by Jim Belshaw at 6:28 pm