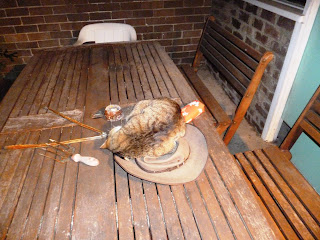 Down here in the deep south Randwick City Council, the adjoining council to the little suburb where I live, has a problem with cats. A serious problem.

Now, it will be no secret that I have a cat. I had two if you count my share of Scrawny, but he died in January.

I inherited Avenger when the household broke up and he has been something a nuisance, but also a godsend: a nuisance because (among other things) he persists on sitting on and indeed marking my papers when I am trying to work; a godsend because he provides company.

We have worked out a reasonable working arrangement. Avenger is an indoor-outdoor cat. The house has a cat door, so he can get in or out when he wants. I feed him inside, but I don't need to keep kitty litter because he goes, very neatly, in the garden beds. I can go away for a few days without worrying because I leave food for him inside and he can access that and also sleep inside. He does that more now as he has got older. He is a good mouser, although he will insist on sharing his prizes with me, leading me to carry him promptly outside!

Avenger is one of the issues that I have had to address in considering a move. A large proportion of rentals carry a no pets allowed tag. Of those that allow pets, a considerable proportion allow outdoor pets only. Very few rentals also have cat doors.  All this brings me to Randwick Council's problem with cats.

Randwick Council has a sort of power-sharing arrangement between the Greens and Labor under which a Green councilor would become mayor for twelve months to be followed by a Labor mayor. The Green mayor stood down because she was going to run as Green candidate for Coogee in the next state election. Her place  was taken by Labor councillor Kathy Neilson. Her first action was a call for action to control cats.

Ms Neilson moved a motion calling for the creation of a committee to look at ways of keeping cats indoors as well as fines for cats that "run free or defecate in public." She also proposed higher registration fees for cat owners, The measures were designed to protect native habitat and fauna.

Independent councillor Carlos da Rocha who apparently works as a ranger supported the motion. He said he chased and would continue to chase misbehaving cats, adding that he did chase fences, They should be fined, maybe not as much as a dog, but they should be fined because they cause more damage to people's garden.

The motion was narrowly carried.

As I write, Avenger is again sitting on my work log demanding attention. I asked him if he damaged the neighbours' gardens or had indeed been chased by a fence-jumping council ranger. He just looked at me then jumped down for a snack and demanded to be let out. As he wandered out into the rain, I wondered just what he might be up to. Should i be concerned?

I would have thought that the only danger to native fauna and habitat in the depths of Randwick would be the occasional rampaging gee gee, or the occasional lost and disoriented student from UNSW, or maybe both. Then again, they may be the damageable native fauna. I doubt that the average lost, stolen or strayed domestic cat could damage either.
I do hope you don't mean what you say, when you state that Avenger 'marks' your work!! Technically, in the feline world, that means some very smelly tomcat piss, even if, as one hopes, he has been detommed.

There are pockets of habitat (towards La Perouse; the vestigial military land behind South Coogee/South Randwick come to mind) where cats could reek havoc.

The reported statements by the fence-jumping ranger indicate to me that present laws are adequate to address the "defecation" issue.

My guess is that you need not be concerned unless you fall out with a neighbour. In any event your own statements on this blog suggest you will be in Armidale (where prospects of your cat doing harm may well be greater) before any changes.

No, A does not pee on my pages! Rather, he sits or lies on them as he is doing at present. When he comes in from outside and does so leaves marks all over the paper. Don't mind that with my various notebooks. Do mind with books or documents. As he has gotten older, he is quite an old cat now, he spend more time inside.

There is more wildlife, especially bird life, in both Randwick and Bayside Council areas than people realise. This ignores any UNSW students! I certainly have no problems with ranger actions against cats in those areas. But this type of proposed council action is over the top.

OMG I have just read my previous comment and am embarrassed.

I first typed "reak" which I realised was wrong (or should I say rong?).

On the other hand, if Avenger were really marking your papers, you might think I was being very witty indeed.

Actually, marcellous, your use of reek did make me laugh! As I write, Avenger has come inside damp. having sat down on my work log and made the ink run he has gone to sleep lying by the key board!