I am tired tonight. Today has been a catch-up day after a busy few days. So I only feel like rambling. 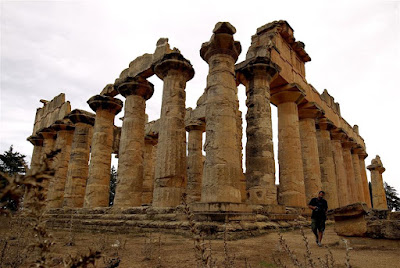 I was struck by the Artdaily photo of the temple of Zeus among the ruins of the ancient Greek city of Cyrene, now Shahat, some two hundred kilometers from Benghazi, northeastern Libya. Cyrene was a colony of the Greeks of Thera (Santorini) and a principal city in the Hellenic world.

Back in 2010,  I spoke of my trip to Ancient Thera. When I first studied ancient history I took the period of colonisation, the establishment of colonies around the Mediterranean by various Greek city states, for granted. It wasn't until I visited Greek Islands that I realised just how small and dry they were. Then the colonisation process became more understandable, but also more remarkable.

Staying with things ancient, I really would like to visit the new exhibition at the National Museum of Australia, Rome: City and Empire, which showcases 200 pieces from the British Museum. By all accounts, it is a spectacular exhibition including pieces not displayed in London because of space limitations that cover Roman history from the establishment of the city to the end of the Eastern Empire. That's a very long period indeed. some 2,000 years.

I was going to leave this item till the end, but then I thought that you might like to listen to it as you read. I am not naturally a musical person, but I have taken to having classical music on softly in the background as I work. I especially like this piece, in part because of the combination of the music with the changing impressionist scenes of Paris.


The story of the Australian impressionist painter John Peter Russell is quite a remarkable if sometimes tragic one. He was, among other things, the only Australian artist at the centre of the Impressionist movement in France. His famous friendships forever changed the way the world sees colour. Now Russell's life features in a new documentary, Australia’s Lost Impressionist – John Russell, to be screened  on ABC TV, Tuesday, October 30 at 9.30pm.

I wasn't aware of the documentary until yesterday's short video shoot on the 80th anniversary of the establishment of the New England University College where the shoot was carried out by director Catherine Hunter and cameraman Bruce Inglis, the same people who produced Australia’s Lost Impressionist – John Russell. Catherine mentioned the documentary during the shoot, so I hastily looked it up today. I also found that Catherine and Bruce have a very considerable body of work.

There are New England connections in all this. Aren't there always? Armidale born artist Thea Proctor was John Russell's cousin who played a major role in later promoting his work in Australia, while one project that Catherine and Bruce are working in is a documentary on another New England born artist, sculptor Bronwyn Oliver. 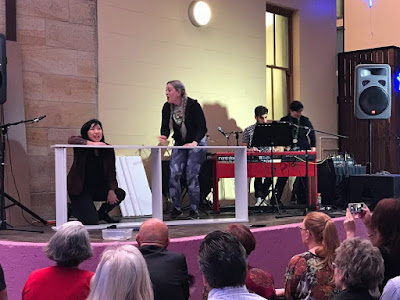 I wasn't completely happy with my role in the shoot. I had done some preparation, but the filming was being done partly for archival purposes, partly to provide stand-alone grabs for a short video to mark the 60th anniversary of the College. These two can conflict, so Catherine had to get me to stop and start again  with a clear opening response that would allow the grab to stand independent of what I had said before.

I came home from the shoot mid-afternoon and then left immediately for Parramatta for an alumni function being held in conjunction with the first night of the Parramatta Lanes festival. This featured performances by New England connected artists including Blush Opera's 'How to Build a Billy' perhaps better subtitled "I hate Ikea".

I enjoyed the evening, but it was almost twelve before I got home after what had already been a tiring day. Still, I'm not complaining!