Christmas reading and the Viking Age

And so we come to 2019. I haven't made any new year's resolutions. It seems to me that they mainly provide a record of failure! However, I am going to try to do a few things a little better.

Over on her blog, The Resident Judge of Port Phillip is very good at recording books she has read, films, she has seen. I read a lot, too much perhaps because I don't always record much before slamming onto my next book. I will try to do a little better here. Eldest visited Australia over Christmas with her Danish partner.  Helen has been indoctrinating Christian into things Australian. This is Hyams Beach on the shores of Jervis Bay. Christian has been carried off to a number of beaches, been paddle boarding at Rose Bay, saw a women's T20 cricket match and is slowly and somewhat reluctantly learning about rugby.

It seems a very strange game to him. He has watched one match with Helen in a Copenhagen pub where the sight of large men lifting another even larger and taller man in the line-out to catch a ball struck him as somewhat bizarre, a view shared even by some Australians!

The influence goes two ways, of course. The Danes are outdoor people, so under Christian's influence Helen has acquired a like of camping. I find that a very good thing!

Since Helen moved to Copenhagen my knowledge of things Danish has advanced by leaps and bounds. To continue this process, Christian gave me two books for Christmas, the Xenophobes guide to the Danes and Else Roesdahl's The Vikings. This is a very good book.

Over at her place, Art and Architecture, mainly, Hels had an interesting story (Did the Bayeux Tapestry prove the existence of a lost Aryan master race?) about the desire of the Nazis to find the original Aryan race and to establish a connection with the Vikings. It is a nice piece, but set a little too much within a particular framework of English v French. It's not quite like that, I think.

I have commented before on the way in which particular frames, particular stereotypes, affect historical thinking. I grew up thinking that the Roman Empire finally fell in 476 AD with the abdication of the last Western Emperor. It did not. It continued in the eastern Empire for centuries yet.

I grew up thinking that the end of the Empire marked the start of the Dark Ages. It did not. The progressive collapse of the Roman Empire in the west did greatly affect the previously settled patterns of life that had existed for so many millenia in one area, but it wasn't all ruin. Trade, contact and indeed some technological advance continued in ways that fell outside my then mind-set.

This type of historical stereotyping continues today in in the uneasy and often virulent discourse between left and right where perceptions of history become a  weapon to be used to establish points, ascendancy, in battles based in part on intellectual constructs, more on shifting concepts of nationality and tribal identity and the idea of right and wrong.

These differing perceptions cannot easily be challenged by point to point rebuttal, Such rebuttals will be angrily rejected in an argument that is fundamentally a-historical, where history has become a device to support or challenge deeply held views, a weapon in current battles, a weapon used by groups including states to provide legitimacy. They can only be challenged through research, through the steady accretion of evidence, through conscious effort to stand outside particular perceptual frames. With time, this does shift perceptions, but it is a slow process. 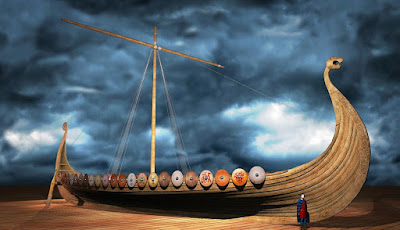 The strength of Roesdahl's book is that it is written from a different perspective, from the viewpoint of a particular area, Scandinavia. It draws from multiple sources of evidence, combining historical records, archaeology and linguistic analysis.

The Vikings were traders, raiders and settlers depending on circumstances. Their long ships became a symbol of fear, although these were not the only Viking ships.

Roesdahl looks at the Vikings and the history of Scandinavia from all geographic sides, east, west, north and south. This was a time in which the current Scandinavian countries as we know them today were emerging. Viking raiders and traders established trading posts, colonies, bringing tribute and traded goods from all parts of the world, from China, from Byzantium and the Caliphate, from what is now France, from England and Ireland. They were players, forcing others to respond. The name Russia comes from the Scandinavian word rus. The imperial guard of the Byzantine (Eastern Roman) Empire, the Varangians, were of Viking origin.

In tracing history and trading patterns from a Scandinavian viewpoint, Roesdahl provides a picture of economic as well as political activity over a wide space in the early Medieval period that breaks out of the national centricity of so much history. Yes, her history with its Scandinavian focus has its own centricity, but it is a different centricity that therefore informs and challenges.

1066 is often taken as the end of the Viking Age. All the main players had some Viking connection. English King Harold  had some Viking blood. He came to power in confused circumstances not long after England and Denmark had been one kingdom, creating a succession challenge involving many players. .

The king of Norway, King Harald Hardrada, believed he had a claim. He invaded England with a large force supported by  the English king's brother Tostig Godwinson. Newly crowned Harold took his army on a forced march north, catching the invading force by surprise. At the Battle of Stamford Bridge on 25 September 1066 the invaders were routed. Both Hardrada and Tostig Godwinson were killed. Meantime, William of Normandy was invading to claim the thrown.

Normandy had been a Viking settlement. While the Scandinavians had been partly absorbed into the general population, William had Scandinavian blood. William's forces landed on 26 September 1066, the day after the battle of Stamford Bridge. Harold now force marched his army south. On 14 October, the two armies clashed at the battle of Hastings. William won the day. Harold was killed.

I have often felt that Harold should have taken more time to regather forces, to regroup, but that is being wise in retrospect. The Viking age had ended.
Posted by Jim Belshaw at 11:31 am

Happy 2019, Jim
As a former resident of Vincntia, neighbouring Hyams Beach, I must point out that Hyams is grossly over-rated. Whitest sand in the world, they say! But the sand was just the same at VINCENTIA.
As an avid viewer of the Vikings on Netflix, I wonder how their descendants ended up to be so civilised!

Now why don'y you post a photo on FB to prove your point? And then I can pinch it!

I don't think that they could help themselves! And Australia has its convicts. :)

Hi JDB
I have lots of convicts in my line - including a First Fleeter. His grave, in Maitland's old Rathluba cemetery is the only definite FF burial site outside Sydney (wef 2011). DNA testing indicates Viking inheritance, so I get a twofer. I consider myself to be reasonably civilised.
The Viking strain also explains the familial Leiden 5 clotting disorder and de Puyten's contracture of the hands, sometimes referred to as the Viking disease.
JCW

Morning JCW. Is that the east Maitland or Glebe cemetery? You have inherited some of the Viking bad sides!

Glebe; in what is now the Rathluba estate.
I also missed out on the Viking tallness gene. I figure my direct ancestor must have been Dora the Duck Arsed.
Moving soon?
J

I don't think I dare call you Dora! My current contract work finishes in a few week's time. After that