Saturday Morning Musings - the importance of the local in Australia Day

I find myself out of sorts with Australia Day. The major celebrations attached to the day date back to the 1990s when it suddenly emerged as a major event. I remember us taking the girls to an Armidale celebration in the 1990s. It was quite pleasant, something to entertain the kids. However, I was never very comfortable with the sudden focus, it struck me too much as jingoism, almost un-Australian. Later I mellowed a little, for I came to see it for what it was, an excuse for a party. 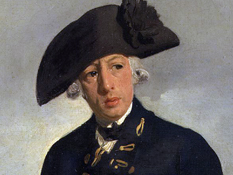 This year, the months leading up to Australia Day were marked by the usual disputes over the day and especially the date. The day marks the landing of the First Fleet at Port Jackson and the raising of the British flag to mark the start of the new colony. The fleet had arrived several weeks before at Botany Bay but found that Botany Bay was unsuitable as a base. So Commodore Arthur Phillip took a small boat north and entered what is now Sydney Harbour, a much more suitable location. The fleet then moved.

You can see why 26 January might not be seen as a good day by the descendants of Australia's Aboriginal peoples. To them, this is Dispossession or Invasion Day. Some Aboriginal people, not all, want the day shifted to a more "neutral" day. This cause has been taken up by the "progressives" who have added it to their list of causes : "First reconciliation, then a republic – starting with changing the date of Australia Day" as one article put it. Now this conflation of issues gives rise to acute dyspepsia on my part. I have to rush for the antacid.

A large majority of the Australian population supports retention of the present date, although there is an age gradient. Those under 24 are the only group in which support for the current date is in a minority. Every other age group shows a majority for retention that rises with age.

Personally, I don't care. The only reason that I can see for retaining the present date is the platform it provides for Aboriginal people seeking redress from the ills of the past. From that comment you might surmise, correctly, that I support the idea of reconciliation and of a treaty. But I do not support the idea of a republic. When the "progressives" conflate all these issues I find myself opposing a date shift, I question reconciliation, since all of these are meant to end up with an outcome I do not want. And when Peter Fitzsimons, that Don Quixote of "progressive" causes with his red bandana, starts tilting his lance at windmills I want to tilt back!

I will put dyspepsia aside. I am old enough and, hopefully, wise enough to deal with separate issues separately even when others conflate them. In doing this, I will also put aside the arguments of our cultural warriors and instead focus on a few positives, things that make me think that this country is in fact doing okay.

One feature of all the Australia Day ceremonies at local level is the recognition of local heroes, the people who have contributed to local communities in a whole variety of ways. To illustrate this, I will take one newspaper, the Guyra Argus. For those who don't know Guyra, it is a small town between Armidale and Glen Innes on the New England Tablelands. 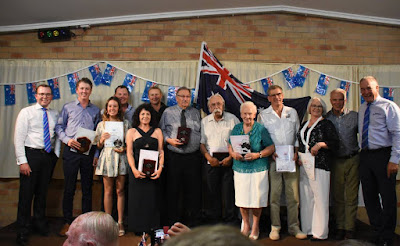 This photo shows those who received awards for community service in Guyra. It's quite a big group for a town with a population around 2,000. The Argus story provides some of the details.

Aileen MacDonald is Guyra’s Citizen of the Year for 2019, primarily for her role in promoting activities directed at Guyra's economic development. These are varied and quite intense.

.Bronte Stanley was named Young Citizen of the Year. The Guyra Central School captain organised a very successful Mental Health Day for the students, earned a place at the National Youth Science Forum, and has excelled in swimming and the arts.

Russell Roberts received the award for Community Service. The Ben Lomond Landcare and Rural Fire Service volunteer played a pivotal role in the inaugural Winter Fair, and is a foundation member of the StarGrazing event.

Painters Kay Smith and Brian Irving received the award for Arts and Culture. They coordinated the TroutFest Art Show, and provided a lot of advice to young artists.

Braydon Cameron is Guyra’s Sportsperson. The 16-year-old was a member of the Under 19 side that finished runner-up at the Sir Garfield Sobers Cricket Tournament in Barbados. He trained at the Central Northern NSW Academy for cricket, coached a number of junior teams, and scored 228 not out at an Open schools cricket tournament.

Jason Campbell and Luke Blyton were recognised for their Contribution to Sport. They coached the Guyra 12s rugby league team with great success in the Group 19 competition. The team achieved the season’s highest points tally, claimed the Best and Fairest player prize, and demonstrated great sportsmanship.

Passion on the Platform was the Community Event of the Year. The Guyra & District Chamber of Commerce event attracted more than 100 people for a seven-course degustation at Guyra Train Station. The sold-out event shone a spotlight on local food producers.

Now when you look at this list, notice the range of activities. Australia works as a country because of the millions of people who are involved and care at a local level. This is not big ticket stuff that grabs the headlines. It is people who care and contribute, who want to make a difference locally. 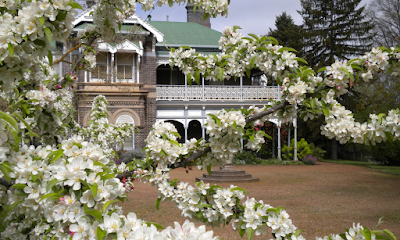 In other local Australia Day awards, Les Davis was awarded an OAM for his tireless work at Saumarez Homestead, a National Trust property just outside Armidale, while an OAM was also awarded to Max Tavener for his service to veterans and their families around Armidale.

There is something hit and miss about the National Australia Day awards. I know of so many people who should have been recognised but have not. I suspect that's inevitable.

The local awards are a far better reflection of real contribution at points in time. They encourage people to continue, they show the depth which underpins this country's continued strength. Regardless of the date of Australia Day, the local festivities are its real core.