Sunday Essay - the importance of local adaptation in buildings

I have mentioned before my liking for the UK TV program Grand Designs. Finally, after so many episodes, I fear that I have largely, not totally, lost interest. There is a certain sameness that has become wearing, sameness in many ways: in design, in building materials, in the huge use of glass, in the hermetic sealing. I had no idea that house airtightness had become a measurable building requirement. at least in the UK..

This comment on sameness may seem strange when there are variations in building materials and apparent differences in design, but there is a certain sameness nevertheless.

I was thinking about this while listening to a radio program on the unsuitability of modern Australian houses to hot weather in the absence of air conditioning. One comment was that younger Australians have lost the folk  memory of managing a house in hot and cold. I suspect that's right.

I have only lived in two houses with air conditioning and then only for brief periods. We rarely used it, in part because of expense. I suppose I have a bit of a phobia about air conditioning. All cars now have it, people insist on using it, but it gives me a headache. I need the windows open, something that can be a cause of dispute.

I first came across the concept of breezeways in looking at colonial Australian architecture where many homesteads were consciously designed to maximise shade and air flows. I immediately recognised It and have been thinking about it since.

The old semi I live in now starts cool but the warms up as the bricks absorb heat. So it starts cool and then can become and stay hot, even when the outside is cooling. This can be a real problem if I am working elsewhere and come home to a sealed and very hot house. Nothing worse than going to bed in heat when it's cool outside.

But the house does have eaves. That's important. It may be hot in the sun, but the temperature does drop when you move into shade. There is also some shade on the western side. So I have found by judicious use of blinds and open doors and windows I can stabilise the temperature at lower levels even when it is over 30c outside. Just as well, since I find it hard to work in a hot house.

I think that Australians have to relearn how to live in hot and indeed cold temperatures.

Consider street trees. There was a period when councils replaced the large street trees with smaller trees. This was done partly because the bigger trees interfered with power lines, partly because the trees dropped leaves and small branches (my present local council comes round with blowers to get leaves out of gutters so that their council sweeper trucks can then gather them up), partly because they were seen as more decorative. The result exposed the footpaths to direct sun, making them unpleasant in hot weather.

I grew up in cold country, well cold by Australian standards. Those wanting gardens learned of the need to create micro-climates, areas protected from the cold winds with their wind chills and from frost. Australians now have ceased to be gardeners and that knowledge is progressively being lost.

This idea of microclimates is slowly coming back and not before time. Those urban councils who took out trees are suddenly recognising the value of deep shade, the way that greenery can lower temperatures across entire areas. Councils, whose belief in development created concrete spaces that turned into heat sinks that finally chased people away, are experimenting with ways to drop temperatures and bring people back.

Those living in the country have, I think, always been more conscious of just what can be done to ameliorate the effects of climatic extremes. They have had to be, although even here some of this knowledge was lost for a time. we can, I think, see this in homestead architecture where the older houses with their verandahs were replaced by modern homes influenced by urban architecture. Now verandahs are back. We can also see it in the re-greening of the country. 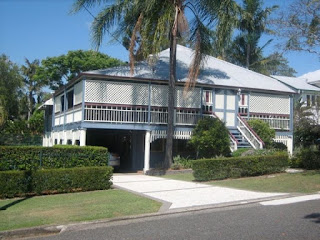 Townsville has recently suffered major floods, the largest in the city's history. In those floods, the ground level modern homes suffered more than the classic Queenslander raised above the ground to provide air flows - and greater freedom from flooding.

Today we believe in uniformity, in the application of standard rules and standards. You see this in every aspect of public policy - and indeed politics. The problem with this approach lies in the way that it ignores local variation.

An example is the 1950s push in NSW to remove shop verandahs, replacing them with awnings. There were  practical reasons for this including safety and the desire to make street parking easier, but there was also the acceptance of a certain idea of modernity, a desire to show civic progress. The end result was a sometimes cloying uniformity. 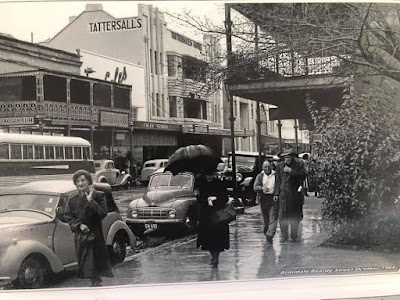 Our new city subdivisions are much worse, in part because of their size. You can drive for miles through outer Sydney or Melbourne or the lower Hunter Valley and see no variation.

In the new apartment areas that you find in in, say, Sydney's Green Square development, the use of cladding can create individually attractive buildings, but the total affect is one of sameness.

It has always been true that changing fashions in architecture combined with the development of new building technology does impose a certain uniformity based upon time of construction. This allows us to classify architectural styles, to create categories such as Federation or California Bungalow. 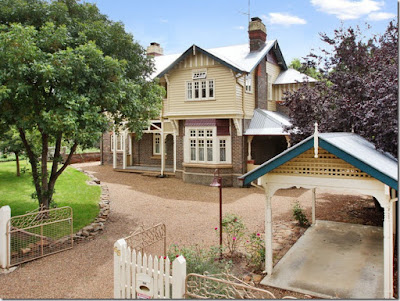 55 Mann Street Armidale, an example of the Federation style. This was also my grandparents' home in the 1930s.

This type of patterning adds to adds to the visual value of the built landscape, a value reflected in changing patterns of use. That row of humble workers' terraces suitably modified become the valued residences of young urban professionals attracted by closeness and an inner city vibe. However, I do wonder about the overwhelming impact of present building approaches associated with rapid urbanisation.

My grandfather once said that God invented the country, man invented the city, but the devil created the suburbs and built flats. I have some sympathy with that view, although now the flats increasingly dominate the inner city landscape. There is something biblical about the idea of developer Meriton as an agent of the devil!

I may seem to have drifted a little from my starting point. I think that my key point is that in reinventing both the built and to a degree rural landscape, we need to focus less on universal standards or styles, more on creating a landscape that recognises basic variation at a microlevel, A building, urban and rural design, should accommodate, be related too, the local environment, not engineered to be independent of it.

Australian Broadcasting Corporation on heat effects in Western Sydney: Sophie Coombes loved her Penrith life, this is why she's left it behind.

Why are flats called "flats" - just as a matter of interest?

Do you know, I couldn't answer that. This is what I found - http://www.funtrivia.com/askft/Question52138.html. Growing up, I thought apartment was the US word for flat, now adopted here because it seemed posher!