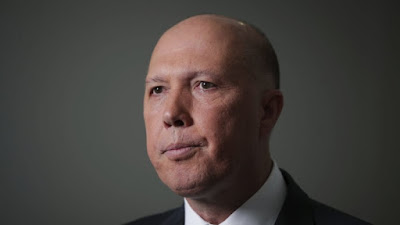 Home Affairs Minister Peter Dutton has used the departure of the last refugee children off Nauru to increase the pressure on Labor over the medical transfers legislation and claim Australians will be "kicked off" waiting lists for healthcare and public housing. Source

I was going to write something on the environment this morning looking back at some of the things that I had previously written. Then in conversation with a friend, I realised that I couldn't go past the latest spray from Australia's Home Affairs' Minister Peter Dutton.

This as been well covered in the Australian media, I tried to find a release or transcript of Mr Dutton's remarks because I like to check the original material but without success so am relying on the press reports.

Social housing is in short supply because of previous underinvestment. In NSW, for example, there are more than 50,000 people on the housing wait-list. Housing is allocated first to priority applicants, which means that those on the general wait list can wait a very long time for a house. This wait varies from place to place, but is highest in the cities.

Assume that every person on Nauru or Manus Island ended up in Australia as a consequence of medical transfers and was given NSW social housing. At present, there are something like 150,000 social housing properties in NSW. As I said, there are around 50,000 on the wait-list. As housing has become tighter and more expensive in general, as the proportion of very low income or welfare households has risen, families are staying longer in social housing.

So if every refugee household, household includes single men, was evacuated to Australia and given social housing in NSW it would be a tiny proportion of the total housing stock, but might amount to a reasonably significant proportion of social housing becoming vacant. This would push out wait-lists. However, the final impact would depend upon the actual number of properties required and their distribution,

The position in the public health system is a little different because of scale differences. I haven't had time to check numbers, but I suspect the effect would not be statistically significant.

In a way, all my analysis to this point misses the point, but I wanted to provide a minimal statistical base. You see, Mr Dutton's remarks are misleading, playing to concerns in the Australian community for political effect.

If this were a serious public policy issue, Minister Dutton, and the PM who later echoed Mr Dutton's remarks. would need to provide information. How many might actually end up In Australia and how much might this cost? They do not want to do this.

Consider social housing where the impact may be greatest. Here we have one problem, underinvestment in social housing, conflated with a second one, the impact of new demand on constrained social housing supply. Even if every detainee ended up in Australia, and that won't happen , we could fix this with a one-off total spend of perhaps $500 million. That may sound a lot of money, but it's a relatively small spend compared with the current recurrent costs of offshore detention. It would also create a government asset available for later use.

The Government does not want to engage in this type of discussion for fairly obvious reasons, it distracts from its primary narrative, the need to protect Australia's borders, stop the boats, they shall not come. While I have previously expressed reservations about the Government's approach, I think it reasonably clear that it has majority Australian support. It is also one of the small number of things that actually favour the Government.

The Parliament's decision to facilitate certain medical transfers was vehemently opposed by the Government. The amendments made by Labor addressed some of the Government's core concerns. The Government was not prepared to accept this and basically doubled down. Mr Dutton's remarks are part of this process.

I have said before that I follow a range of social media and news feeds despite  my sometimes discomfort. One thread is the constant repetition that refugees receive unwarranted preference in housing and welfare benefits, that the ordinary citizen loses access,is disadvantaged, and bears the costs. The Australian threads also constantly recirculate similar material from other countries and especially Europe,

Mr Dutton is, I think, well aware of these views. His latest comments play to them. They also reinforce the underlying theme that if the floodgates are opened through things such as medical transfers then welfare access and costs will blow out to the disadvantage of ordinary Australians. There is a problem here.

To my mind, Mr Dutton's double-down response plays to emotion, reinforces divisions, is designed to stop discussion. I think Australia is the worse for it.
Posted by Jim Belshaw at 3:53 pm

Hi 2t. I wasn't sure of the number, so based my analysis in part on the upper limit. But at 70 Mr Dutton's argument is absurd.

TBH the consequent number needing housing would be even lower, if it is estimated one house per invalid's family, lowered by those families with more than one invalid.

Not that I think any will be released for treatment under the new Nauruan laws. Gotta protect their income stream, after all.

Again, I am wildly off-topic but I've just watched in full the testimony of the now former Canadian Attorney General on the latest PM Trudeau imbroglio.

I don't know if newbie Aussie public servants have an introductory course on governance - but if they do then this video should be required material in same.