Book review - 'I wonder'. The life and Work of Ken Inglis 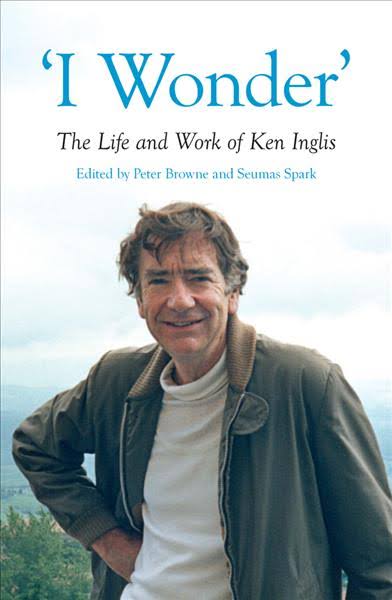 Back in 2007 I wrote Was Australia a Christian country - and what comes now. My answers were yes, not now and I don't know.

I mention this now for two reasons.

First, I was listening to a radio program which asked the question was it possible for a country or group to maintain values based on Christianity once the religious underpinnings had been removed? How did that community articulate the values in such a way that they were independent of the religious expression on which they had been based?

Secondly, my recent train reading has been 'I Wonder'. The Life and Work of Ken Inglis (edited by Peter Browne and Seamus Spark, Monash University publishing, 2020) dedicated to the life of Ken Inglis.

I knew of Inglis and his work. He was a gifted teacher and a considerable historian. However, our intellectual paths never really crossed. I wondered about that. I think that it was partly a matter of age, he was considerably older than me, but also one of interest. Ken belonged to what I think of the southern intellectual tradition, one dominated in academic terms by the Universities of Melbourne, Adelaide and the Australian National University. My tradition is very different.

I mention this now because I read the book as an alien, an outsider looking at a different world. The complexities and relationships in that world were interesting as an anthropological study, as a slice of Australian historiography, but it was the history method component that struck me.

I chose the word anthropological deliberately, for Professor Inglis borrowed methods and insights acquired from anthropology and applied them to history. I try in my own limited way to do the same. This dates back to my my honours thesis, an ethnographic study of traditional Aboriginal life in Northern NSW. Now I am using both anthropological and sociological studies to inform my history of New England, so when I read the book and the description of this part of Inglis's work I nodded and said too true! However, this is the not the main theme of this brief essay.

One of the issues that Professor Inglis addressed was the decline in traditional religious beliefs and their replacement in Australia by civil or civic religion. I accept that this description my be a gross simplification of Professor Inglis's evolving views, but I do think that it captures a key point.

I have always been conscious of the way organisations including states used symbols to unify and channel. Former Australian PM John Howard's use of mateship as a rallying call is a case in point. Here we have a symbol (mateship) with attributes (looking after each other, loyalty to the group) consciously used to unify. Now we may argue about the historical validity (did mateship exist?) or content (what does mateship actually mean?), but the intent is clear.

While I was conscious of the use of symbols, I hadn't really thought about civic religion as a substitute for traditional beliefs, one applicable in a pluralist society with multiple faiths or the absence thereof.

Professor Inglis came to this position via his study of war memorials, the memorialisation of those who had died serving their countries. I say countries, because this memorialisation process is a feature of entities past and present. This explanation left me wondering: if civil religion is now a substitute for traditional beliefs, how do you encapsulate the values and emotional content and beliefs in a way that will sustain and be of civic value; how do you stop them becoming a weapon of tyranny?

I saw this very good post of yours and I liked it very much, I do not know how to praise it, I would just like to say that this post is one of the posts that I like very much and I am very happy to see these posts.
gurgaon call girls
neemrana call girls