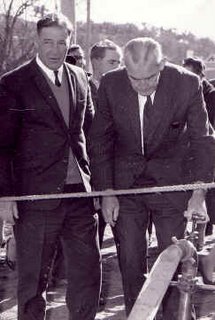 Over the last year or so I have listened to the debate on the role of Davis (Bill) Hughes on the Sydney Opera House and sometimes bit my tongue. Today's Sydney Morning Herald carried the release of a very gracious letter (I could not find the story on line) from Joern Utzon written to the Hughes family on Bill's death and now released by the family. I have also noticed that Peter Hall is now receiving some public recognition for his work.

Given this, I thought that I should write a small personal memoir on Bill. I wasn't sure whether to post this to this blog or to New England, Australia, but thought that I would post it here because it is personal. I will cross reference it on the New England blog.

The details of Bill's life were fairly well covered in the NSW Legislative Assemby following his death.

The son of an engine driver, Bill was born in Launceston. He was educated at Launceston High School and the University of Tasmania, and chose teaching as a career from 1927 to 1935. He enlisted in the RAAF, in which he served for the duration of the war, and reached the level of squadron leader.

After the war Bill was appointed senior science master and deputy headmaster at the The Armidale School, the school I later went too. In 1945 Bill was elected to the Armidale City Council, building a local support base.

In 1949 my grandfather, David Drummond, who had been member for Armidale for a considerable period, moved to Federal politics. Bill was preselected and won the subsequent by-election in 1950. Like my grandfather (and me) he was a New England New Stater and a strong supporter of country education. His inaugural speech to the NSW Parliament was a heartfelt tribute to my grandfather and a closely argued plea in favour of more support for rural education.

In 1953 Bill lost the seat of Armidale and spent three years in the political wilderness. However, he filled those years as Mayor of Armidale, winning back the seat in 1956. As a shadow minister he developed a new style, ignoring short term questions to focus instead on longer term issues. Because of this, and this is a lesson that I could wish some current political leaders would learn, he built up a substantial position over time with the Sydney media because they knew that he had something substantive to say.

In 1958 Bill became the Country Party leader when Michael Bruxner finally retired from the leadership, although not from Parliament, after a record 30 years. In February 1959 Bill ran into a major storm creating extremely stressful circumstances, culminating in a breakdown and loss of leadership. Despite this, the people of Armidale stood by him as their representative and re-elected him only one month later.

On 1 May 1965, the long-standing Labor administration lost the election and a Liberal-Country Party Government was installed. In the lead up to that election I made my first party political broadcast expressing young people's support for Bill.

Bill became Minister for Public Works in the new Government and inherited the Opera House. I do not want to get involved in the specifics here, I do not know enough, but let me express a different perspective.

The commentary in the Sydney media has sometimes presented Bill's position in almost sneering terms as the narrow reaction of a Country Party politician from the bush who simply did not understand the value of the project. Reverse this, and look at the situation from the viewpoint of someone outside Sydney.

The country including New England was short of schools, roads and basic facilities. We faced a continuing drift to the city. And here we had a major public works project that had gone so far over budget that it was twisting the entire state budget.

Even today when the Opera House has become an Australian icon I have problems.

Yes, I know that the Opera House lottery played a major funding role (the budget problem became really acute as costs outran lottery takings), although that raises another set of issues. But I keep thinking that if I had even 20 per cent of the money to spend on New England I could have worked an economic transformation.

As the new Minister for Public Works Bill had to sort the problem and did. But he also started an active public works program elsewhere in NSW to try to catch up on the back-log. The Party was meticulous in reporting progress to its members, presenting regular tables setting out progress against individual election promises.

The new Askin-Cutler Government had promised that if elected New England would be granted a plebiscite on self-government. This promise was quickly delivered. Following the narrow loss at the 1967 vote because of the heavy no vote in Newcastle and the Lower Hunter, the New England Movement redefined boundaries to excise the no vote areas and then stood candidates at the next state elections. Although they scored reasonable votes, none were elected.

The Movement had been non-party political, but there had always been strong-crossovers in membership and leadership between it and the Country Party, one of the reasons for Labor Party opposition to the new state cause. The Movement's decision to run candidates caused sometimes bitter splits and created real problems for the Country Party leadership including Bill.

In 1972 Bill decided to resign from Parliament after a long and sometimes stress-full political career. I had had irregular contact with him mainly at functions. Now I decided to run for preselection for Armidale, taking leave from my public service job to campaign full time.

It proved to be a difficult preselection campaign from my viewpoint, one in which my previous views on conscription (I had been strongly religious at University, opposed to the War and had registered as a conscientious objector) became a central issue. I have no idea what Bill thought of all this, we never discussed it, but he was always friendly. We spent some time together at the Party dinner following the the preselection meeting yarning about the past.

The almost mythic status accorded the Opera House especially in Sydney means that this issue has become almost the single thing defining Bill's position in history. I think important to remember that the man was far more than this, that he had a long and active political life and that for many of us his other activities and achievements remain far more important.
Posted by Jim Belshaw at 2:41 pm

If Davis Hughes had let Utzon build it to his design instead of forcing him off the project, ripping out the interior and dynamiting half the structure to fit in seats which can't even see the stage, it would have been finished two years earlier for half the cost. The fact that the interior was overbudget and is both an acoustic and aesthetic tragedy is entirely Hughes' fault.

Anon, you obviously feel strongly about this. I am happy to be re-educated.

There are the two legs to your comments, what Mr Utzon would have done, how and at what cost as compared to what was done. What would you recommend as the best source?

Biff Ward has just (2014) published a family memoir. In it she says that her father Professor Russel Ward cuckolded Davis Hughes the Country Party MP after he (Ward) moved to the UNE in the 1950s.

I have't read her memoir yet anon. The press descriptions sound dreadfully sad. Thank you (I think) for drawing it to me attention. I now feel obliged to read it.

Won't comment on the Bill Hughes issue or, more broadly, on Russell. It's irrelevant to the point I was making.