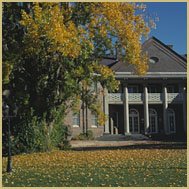 Looking back it's kind of funny. I was not worried in any way about leaving home. I had been hitch hiking in Tasmania on my own at 16, getting my 1961 Leaving Certificate results at the Hobart Post Office.

During this trip I had run out of money at the end. I had just enough for a hotel room. Being proud, I refused the offer of free meals from the hotel, surviving for three days on a small bowl of fruit before catching the plane to Melbourne. Finally getting to Sydney but without money (I had my plane and rail tickets already paid for), I carried my pack from Central to Edgecliffe where my aunt served me bacon and eggs, my first full meal in five days. Since then I had often travelled on my own.

So I wasn't worried about leaving home. But what is funny is that I treated the move almost like going on holiday, as though I would be back a month later. Among other things, this meant that I did not pack as much as I should.

It is also funny in retrospect that I was to find this new life so absorbing from the beginning that I simply put aside so many of the things that I had been interested in as though they had not been. Again this fits with the holiday mode. This was to prove to be a mistake, because they were still there and so deeply imprinted that they were to come back. I would have been far better off if I had kept them in mind.

At Canberra airport I was met by a commonwealth car, one of those cars used to drive ministers, and driven to Brassey House.

Named after Sir Thomas Brassey, Governor of Victoria from 1885 to 1900 and first Earl of Brassey from 1911 until his death in in 1918, Brassey House was completed in 1927 to coincide with the establishment of the Federal Parliament in Canberra and used as a guest house for the exclusive use of members of parliament and mid-level government officials relocating to Canberra. It had been extended in the early sixties to include conference facilities.

Arriving at Brassey House I had my first shock. I thought our starting salaries were very good. I had also assumed that because the first part of the year was full time residential training the Commonwealth would be paying living costs. This proved not to be the case, and Brassey House was not cheap. So one of the first things I had to do was to arrange an overdraft to give me some extra funds!

I met most 0f my fellow trainees the following day.

The Board and Department of External Affairs had agreed to combine both the diplomatic and admin training programs for the initial six weeks, so we were quite a big group. Ages ranged from 19 (many people then finished their pass degree at 19) to the early twenties. Both groups were pretty bright and came from all over Australia.

One of the older people in the admin group was George Brouwer, now Victorian Ombudsman.

A serious person, George had been born in the Dutch East Indies just prior to the Japanese invasion. He and his mother had been interned in one prison camp, his father in another. The only photo George's mum had of her husband was a head and shoulders shot. Each night she made George kiss the photo. At the end of the war the Dutch men broke out and went in search of their families. As George's dad arrived at the camp, George saw him and recognised him from the photo. He rushed back to his mum saying "Mummy, Mummy, daddy's here - and he's got legs!"

We used to tease George simply because he was so serious. We also bought him a copy of Snuggle Pot and Cuddle Pie to educate him on Australian childhood! Others in the group included Alan Rose and Roger Beale, both of whom were to become department heads.

Life revolved around Brassey House. We worked reasonably hard during the day then socialised at night, drinking rum and coke and playing cards. There were also some social functions where we met previous admin trainees and diplomatic cadets.

We also started finding our way round Canberra.

The city was then a period of rapid growth. The total population of the ACT in 1945 was just 13,ooo. By 1957 this had increased to 39,000, then to 50,000 in 1960 and to 96,000 in 1966. Australia was carefully but rapidly building a national capital that was intended to be a symbol for the nation. With rare exceptions, everyone in Canberra came from somewhere else, so it was very easy to make friends.

I think that there was another advantage in this emigrant mix as well. It made for a diverse public service that knew from first hand experience about attitudes and experiences across Australia.

I found the training program itself very interesting. I also find it interesting looking back because its structure and content tell us something about the changes that have taken place in Australia.

The public service was then seen as a career service in the Westminster tradition.

This meant that it was meant to be a neutral, independent, anonymous, career service: neutral in the sense that we served the elected Government regardless of its party composition; independent in that the Government of the day did not control personnel matters (this was the responsibility of the Public Service Board), while Departmental heads held permanent appointments; anonymous in that while individual public servants might be well known, our advice to and discussions with Government were private to that Government; a career service in that people served for the long term, rising through the ranks.

Something of the flavour can be seen from the comments quoted by Patrick Weller of two senior and very well known public servants to the 1970's Royal Commission into the Commonwealth Public Service. Asked about the objectives of his Department, Sir Lennox Hewitt replied:

I have not previously encountered the suggestion of objectives for a
department of state. The Royal Commission will presumably not need
anything more from the department than a copy of the administrative
arrangements.

Sir Frederick Wheeler's response to the same question was:

The function of the Treasury is to advise and assist the Treasurer in the
discharge of his responsibilities. The objectives of the Treasury are, in
essence, to carry out this function as effectively and efficiently as possible.

Our training reflected this traditional view of the Public Service. So we learned at a nuts and bolts level about the structure of Government, about the roles of Parliament, Cabinet, the Executive Council and Departments of State. We also learned about personnel management in the Public Service including its history.

We spent a fair bit of time talking about what would now be called ethics and values hearing a variety of speakers including Wilfred Jarvis. A key issue was the role and preservation of individual ethics.

If our role was to help a Government define and carry out its policies, to use Sir Frederick's words, as effectively and efficiently as possible, what were we do if we disagreed? Clearly we should provide advice pointing to issues and problems the Government should consider, but once a decision was made our obligation was to carry it out. But what then, if the decision was so badly flawed (at least in our view) that we could not (or should not) in all conscience implement it?

We discussed the case of Adolf Eichman as the supreme public servant. He had been given a task by Government, the extermination of the Jews, a task that he certainly carried out as effectively and efficiently as possible. We also talked about the techniques that the North Koreans had used in brainwashing prisoners during the Korean War, at the way in which individual values could be broken down. A key message was the way in which a series of small personal decisions/actions could progressively erode an ethical position or set of beliefs.

I am not sure that we reached a conclusion beyond the need to be aware of ethical issues and the necessity to resign should the conflict be too profound. However, I was to find the discussion very helpful later in handling specific ethical conflicts.

We also discussed Australian society. Professor Jerzy (George) Zubrzycki , for example, spoke to us on the migrant experience, outlining among other things the process of integration that the migrants had gone through over several generations. We also learned a range of technical skills.

Some knowledge of economics was regarded as critical. Professor Burgess Cameron told us that he intended to cover the entire undergraduate economics course in, from memory, fifteen sessions and indeed he tried very hard to do this. In response I had to ring my father, get him to dust off my economics text books and send them down to Canberra by train.

We also did some practical work including a major in-basket exercise running over a number of days in which we each took particular roles - I represented the Department of Shipping and Transport - undertaking research, writing minutes (correspondence within Departments) and memos and letters (correspondence between Departments) and participating in interdepartmental discussions. This was useful, although our trainers had underestimated the quantity of written material likely to be generated so things started to collapse because there were not enough typing resources.

I have described the course at some length because I joined the Public Service at the start of a period of massive change and in writing want to give a feel for the old Service.

There are differing views about this change process.

I have a different view. While change was required, my feeling is that the Public Service today is neither as efficient nor effective as it was.
Posted by Jim Belshaw at 5:11 pm

Professor Jerzy (George) Zubrzycki -- now there is the real father of Australian multiculturalism, and not exactly a household name, is he? I have enormous respect for his work.

Thank you lexcen. Neil, I only ever met him that one time, but he was an interesting man.