Why Australians - and Kiwis too - are rather wonderful 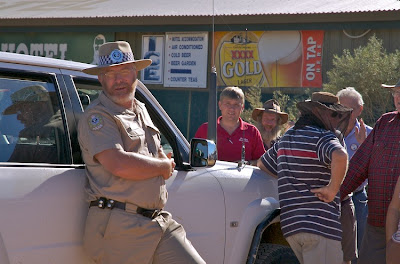 Photo: Gordon Smith, We get the Good News. After nearly a week marooned in Innamincka due to water logged roads and flooded creek crossings, Gordon Smith finally gets the news that he can move on. But only if they go east!

Early this morning I started another post on the Australian Government's intervention in the Northern Territory. Then I became very dissatisfied and stopped. I will continue (now posted), but something happened tonight that explained to me why I was unhappy.

I was talking to eldest about one of her friends, a really nice and intelligent girl. This girl has strong views about Asians. Those of the PC variety would call her racist. Yet she has Asian friends from school who she thinks are wonderful and sees no inconsistency between her general and particular views. I thought that this was very Australian.

Australians have always been prejudiced so far as other groups are concerned. At the end of the Second World War surveys showed - I cannot give the reference because I am remembering things from years ago - that Australians thought of Southern Europeans as wogs and had strong prejudices against them.

Yet despite this, Australia launched a mass migration program that changed the entire ethnic composition of the country and accommodated this with minimal disruption. This was a remarkable feat. Now we are doing it again, hopefully with similar success, with the admission of peoples from very different ethnic backgrounds.

Key to this has been our capacity to distinguish between individual and group. Mr Hittler concluded that all Jews were bad regardless of individuals. The Australian position is that a group may be bad, but Fred from that group is okay. So we can adjust.

Now how does this link to Australia's indigenous peoples? Why did it explain to me why I was unhappy?

Quite simply, I think that we are losing the plot in some of the current discussions triggered by the Commonwealth Government's intervention in the Northern Territory. But the reasons I think this are quite complicated, mixing a whole series of things together.

I had some difficulty in answering the question in the census on ancestry.

My dad was born in New Zealand.

I am very proud of my New Zealand side, and often classify myself as as half Kiwi or even just Kiwi. I see New Zealand as different from Australia, many common elements but also differences that (to my mind) blanch and temper the Australian experience.

On Dad's side, my grandparents were born in England during the mid stages of the industrial revolution. So I am English. When I read Orwell's Road to Wigan Pier I thought of it not as a political or historical piece, but as something about the place my people come from.

This was the world of the formation of the English Labour Party (Grandfather ran for Wigan Council as a Party candidate immediately following the Party's formation), of the fight for worker's rights and better conditions. Today I am still interested, visiting Wigan World to find out about my past.

On Mum's side, her father was born in Scotland and was incredibly proud of his Scottish ancestry. Growing up, I thought of my ancestry as Scottish. For a period I even ate my porridge with salt to be like him!

Like my own support for New England self-government, something that I learned from this grandfather, MacCormick's views were ridiculed by Westminster (Sydney).

Like the Scottish nationalists, my own sense of regional identity, of being a New Englander, my own sense of country, were forged in part by opposition to and the need to change the status quo. In many ways I remain a regionalist and New England populist, always suspicious of imposed central authority, always wanting to understand the local position.

My grandmother on Mum's side came from English farming stock that had settled in New England as small farmers/graziers during the gold rushes. English, but very different from the Lancashire Belshaws' industrial background.

I grew up in a very Christian world. One grandfather was a Primitive Methodist home missionary, the other both a Methodist and Presbyterian lay preacher.

But while strongly Christian, this was also a world of sectarian divides in which the old European battles of Reformation and Counter Reformation, of Irish versus English still played themselves out. I remember one mother from the Irish and Roman Catholic tradition becoming really concerned when I became friendly with her daughter. This was a world in which some official Catholic writings suggested that a Protestant was doomed to perdition.

Yet when I finally married, I married a girl from the Irish, Roman Catholic and Labour tradition. In fact, at one point three generations of her family were members of the NSW Trades and Labor Council at one time. So my daughters now have a Country Party, New England, Populist Protestant tradition on one side, an Irish, Catholic, Labour tradition on the other.

On Time and Change

All this covers a very large span in time and space.

In a day to day sense I now live mainly in the world of Sydney's Eastern Suburbs, wrestling with but also enjoying the challenges posed by teenage daughters who are very much part of the current world. This is the world of ipods, mobile phones, computers, the tribalism of the young, shopping and metro fashion.

Yet I am also conscious of and still influenced by the world of the past.

It is 87 years since Victor Thompson and the Northern Daily Leader re-launched the campaign for New England self-government and David Drummond was elected to the NSW State Parliament for the first time. One outcome was the establishment by Drummond eight years later of the Armidale Teacher's College.

The Great Depression began 78 years ago, almost closing the College. It survived, helping lay the base 69 years ago for the creation by Drummond and the other New Englanders of the New England University College, an action that bought my father to Armidale as one of the original academic staff, there meeting my mother who was in charge of the small library.

The Second World War began the following year, almost closing the new College. I was born 62 years ago as the War drew to a close, my brother fifteen months later, making me a war baby, he a baby boomer.

Fifty three years ago the University of New England gained full autonomy, with dad as the foundation Professor of Economics.

It is now 44 years since my grandfather retired from politics as Member for New England and I attended my first pre-selection meeting, a meeting that saw Ian Sinclair nominated for the seat, a seat that he was to hold until his retirement nine years ago.

It is 42 years since I registered as a conscientious objector in the midst of the turmoil of the Vietnam War, 40 years since we lost the New State plebiscite and I started work in the Commonwealth Public Service, 35 years since I made my first unsuccessful run for pre-selection in a year that also saw the election of the Whitlam Labor Government.

Tracking forward, it is 19 years since I married and our first daughter was born, 11 years since we moved to Sydney, something that I had sworn I would never do and am still not very happy about.

Time, Change and the Australian Sense of Identity

Congratulations if you are still with me.

If you look at this chronology, you can see how the world has changed through the prism of one family.

There is, I think, a great weariness that comes from adjustment to constant change, from seeing your verities, the apparent constants in your life, torn down and replaced by others that disappear in turn.

You can see this today in the anguish felt by many at the Howard Government's intervention in the Northern Territory. I am not making judgements here, simply observing that the reason why the decision has generated so much angst, so much venom, is that it challenges deeply held sets of beliefs.

I can understand this. By the mid nineties I felt a sense approaching despair at the changes that had taken place in Australia. I no longer feel that, in part because of my exposure to my daughters and their friends. In fact, I feel comfortable with them in a way that I am not with their generally Generation X parents.

There seems to be something enduring in the Australian character, something created over the years, that carries on through the generations despite the scale of change around us.

Part of this lies in symbols, language, even the smell of Australia - anybody looking at the photo at the start of this post would recognise it as Australian immediately. We can all recognise this. But part also lies in less tangible things, in the way that we think and look at the world around us.

This is where our capacity to treat individuals as individuals regardless of our prejudices about groups comes in. The same applies to our cynicism about authority, our sense of a fair go, our desire to get things done.

Need for a New Approach to our Indigenous People

It is the Australian character that gives me hope that the Howard Government's intervention in the Northern Territory will prove positive in the longer term, despite the weaknesses that I see in the Government's approach. I say this for a number of reasons.

To begin with, the scale, swiftness and drama of the move has moved the future of our indigenous people and the relations between them and the rest of Australian society to centre stage in a way never seen before.

In historical terms, this will be seen as the defining moment of the Howard Government. Forget Iraq, Tampa and refugees, water, good economic management, whatever All these things will be smoothed over by history, will be seen in terms of trends and patterns. This move will stand out not just because of its role in the overall history of our indigenous people, but as a jagged point, a change point.

I am not sure that Mr Howard and Mr Brough actually realised this. Whether they did or not, the reality is that Government simply cannot afford to fail.

This brings me to my second point. In challenging and overturning previous policy in the way they did, the Government has in some senses swept away the past. We all know that previous policies have not worked. Many of us, me included, have been arguing the need for new approaches. We are now getting them whether we like it or not.

Now here I have a problem. We know that previous approaches have not worked. But the initial Howard-Brough intervention was, again in my view, fundamentally flawed because of its short term and narrow focus on child protection. Here we can already see it evolving in the face of public scrutiny and criticism.

This is where my perception of the Australian character comes in. My belief is that now that their attention is engaged, the Australian people will not accept failure. None of us can say exactly what will result, except that we now have a chance to put the past aside, to work out new approaches that will not just help our indigenous people in the short to medium term but redefine the relationship between them and the broader Australian community.