January round-up of my other writing - Historic changes in climate and sea levels, more on hominin history, architecture and the built environment, Airbnb

Today's post is another of those update rambles through my recent research and writing in other places..

I am still seeking to increase my understanding of the enormous variations in climate and sea level over the last 100,000 years, something that affected all human species.  If Aboriginal people arrived on Sahul 65,000 years ago, they would have been affected by multiple changes including especially the onset of the Last Glacial Maximum and the subsequent arrival of the Holocene. The last two saw sea levels fall by 120 metres below current levels then rise to perhaps 3 metres above current levels before stabilising. The climate fluctuated from relatively benign to very cold, windy and dry to hot and moist to today's climate.

These are huge changes. Generally, they would not have been noticeable within any generation, but sometimes sea level changes were so fast that entire hunting ranges could be lost in a single generation. That's a very fast change, one that appears to have been recorded in Aboriginal oral traditions.

We can think of these patterns at various levels. At the highest level, there are widespread changes that affected the varying distribution and indeed evolution of various hominin groups. Then there is the likely pattern at the time the peoples who would become the Aborigines were making their way to Sahul. We then have the changes that occurred after arrival affected the distribution of people across the continent and might well have threatened the very survival of the Aboriginal peoples.

One of the analytical challenges is to move from the broader picture to the local. The exact pattern of climate and sea level change and its effects varied between areas far more than I had originally realised .There was also more variation over time. You simply cannot take a broader macro picture and just apply it locally.

No doubt you will hear more of all this! For the present, my most recent posts have been:
Populating the Globe

I have continued monitoring as best I can research results on early human history, the most recent post being Beringia and the settlement of North America - DNA results from Alaska.

Of all the academic fields I am interested in, I think that history is the one that has changed most over the years. While the basic canons of the discipline remain, I'm not sure that can be said of other fields such as economics, the tool kit available to historians has exploded. In many ways, history has become a truly multi-disciplinary subject.

This poses a major challenge for historians. How do you  absorb all this stuff, especially in areas outside your areas of expertise?

Architecture and the Built Environment

Architecture and  the built environment has continued as one of my major interests. A sad note first. Dreams of self-sufficiency - the Lammas Ecovillage has been one of the most popular posts on this blog in the last twelve months. Sadly, the hobbit house that featured burned down on New year's Day.

At the end of December my Armidale Express series on New England's built landscape and architecture came to an end after some sixteen columns. There was much more to say, but I thought that it was time for a break. I will bring up a post on the New England history blog providing an entry to all the columns in order and then post a link. For the present, I have created an entry point for the last four columns, The story of builder and philanthropist George F Nott, making it easier to access information on this remarkable man.

As an aside, one of the features I have noticed on the UK Grand Designs program is the importance placed on airtight houses to reduce heating costs and hence energy consumption. This included mandated rules and physical testing to ensure the house is airtight. Watching Grand Designs at a time I was writing on New England's architecture and built landscape, I was struck by the differences in perspective, between keeping heat in and Australia's desire to keep heat out. In pre-air conditioning days.this made things like breezeways, eaves and verandahs critical.

I was therefore struck by a recent story suggesting that modern Australian air tight homes designed to be energy efficient were in fact having the opposite effect. The ABC headline captures the message: Modern homes trapping heat 'like a plastic bag".

My first post on the New England Australia blog this year, How new platforms such as Airbnb and Stayz might support New England development part 1, went in a different direction.

I have always been interested in the impact of new technologies. Most recently, the new communications and computing technologies seemed to hold out the promise of increased individual freedom, diversity and choice. To a degree they have gone in the opposite direction, encouraging centralisation, control, conformity and standardisation.

A particular effect that I have been concerned about is the impact on local activities. The vision was that the the new technologies would provide choice in location and lifestyle. You could work from wherever you wanted, access services from wherever you wanted, breaking the tyranny imposed by distance and travel costs. To a degree that has happened, but for every local job created dozens have been lost through service centralisation facilitated by the new technologies.

In a way, platforms such as Airbnb or Stayz are no different in that the markets they play to are driven by existing patterns. For everybody who knows Bingara, 100,000 plus know Byron Bay. Traffic and service supply are drawn to the existing bigger markets, reinforcing the status quo. .

All that said, I have recently spent time browsing round Airbnb listings for various New England centres. It started looking for specific places to stay but ended with a much extended and quite enjoyable browse. I was left with though that Airbnb or Stayz might actually be used as platforms to support tourist development outside the main tourist centres which automatically attract Airbnb or Stayz visitors. I want to tease this out in my second post in this series. 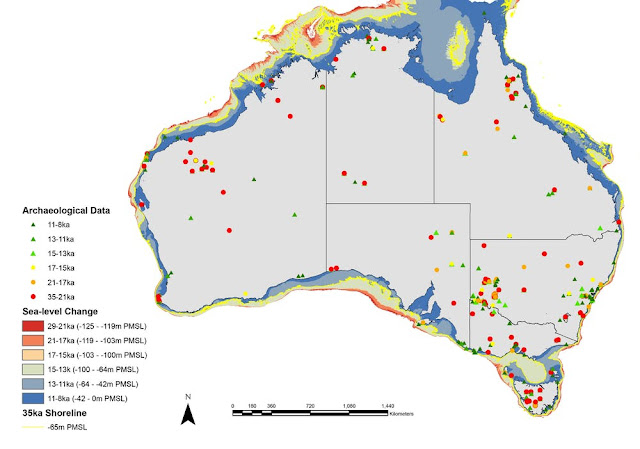 Map of Australia by Sean Ulm showing sea-level change and archaeological sites for selected periods between 35,000 and 8,000 years ago. PMSL=Present Mean Sea Level.

The authors provided a summary of the  paper in The Conversation, "Australia’s coastal living is at risk from sea level rise, but it’s happened before", January 16 2018. The map is from this paper.

While the authors' analysis of the past appears broadly consistent with my own analysis, there are a couple of elements that make me cautious I need to think this through and will write an analysis on my history blog when I have done so with a cross-link here. Meantime, I thought you might find the results interesting.
Posted by Jim Belshaw at 11:30 pm

If I could presume to treat this post as a "roundup" of interesting stuff, here's a nice musical interlude:

- and my ulterior motive is to recommend the blog to marcellous for his reading pleasure :)

That's a lovely story, kvd and a very good blog that marcellous may well enjoy if he hasn't seen it.