I find that my brain has been slow to re-engage after the Christmas break, especially when it comes to serious stuff. To a degree, that's still true. I haven't made any new year resolutions beyond a desire to attempt to work less and to read and relax more.

One of the difficulties with working from home as I am at present lies in achieving real separation between work and leisure. I feel I should be doing something all the time and as a consequence become very inefficient. I  know that I should fix this, but its quite hard. Still, I have picked up my reading. 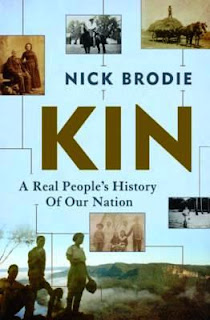 Looking back over my blogs, I have written a fair bit about family history, my own and family history as a craft or discipline. I mention this now because one of the books I read over Christmas was Nick Brodie's Kin: A Real People's History of Our Nation. This is a really good book, a yarn, and I encourage you to read it.

One of the challenges in family history is to find a way to avoid becoming lost in family trees. Each generation you go back in the tree expands the number of names and possible further connections. This makes some family histories effectively little more than lists with some commentary.

The long running BBC TV series Who Do Think You Are, the start of a global franchise, solved this problem by selecting only what they saw as the most interesting bits, the Australian program even more so. This plus the sometimes breathless imposition of current views and sensibilities on the past became somewhat annoying with time.

Nick has chosen a different route by taking portions of the family tree and telling the story in discrete blocks, effectively making each a stand-alone story. This means that you don't have to remember the entire family tree, although I sometimes found myself a little lost and had to refer back to the main tree at the front of the book. But that's just me. You can read the book as a series of stories without worrying to much about that. 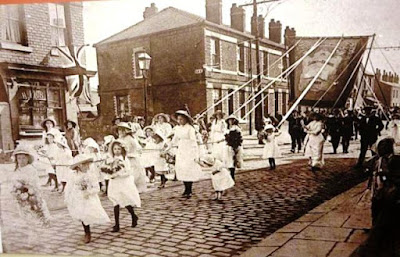 He has also consciously tried to place the stories in the context of the time, trying to avoid or at least minimise the filter created by the present.

I mentioned in an earlier post that I had finished, at least for the present, my Express series on New England's built landscape and architecture. Inspired Nick Brodie, I decided to do the next series of columns on the Belshaw family.

The first column is here. The photo shows walking day, Platt Bridge, Wigan 1900. I promised Cousin Cyril a long time ago that I would write a full history of the Pacific Belshaws and added it to my list of books. As you might expect given my already existing list of books, this has lagged. Still, its a start in sorting out themes. .

The reach of the first is only limited by the powers of two and the available records. Whether it is interesting to others depends on who's telling and how they can tell it.

Morning, marcellous. Sorry for the lagged response. I had to look prosopography up! For those who do not know the term, the wikipedia article is quite good. https://en.wikipedia.org/wiki/Prosopography

While I didn't remember the term, it wasn't in use during my undergad studies, I know the approach. Namier's 1929 book on the structure of politics was a set text. At the time, I must say I found it very tedious. I could understand the method, but wasn't really interested in the topic. I still have it somewhere and should re-read it. I might have a different view now. I use some of the techniques myself and have also been influenced by the work of Alan Atkinson including the family reconstitution approach.

I would add to your last sentence that interest is individual. As evidenced by the huge interest in genealogy and family history - some of the largest FB group pages focus on particular localities and the families who lived there - people want to place themselves in contexts. I find some of this stuff interesting too because data into my broader narrative - prosopograhy in fact!

One of the interesting challenges, one that Brodie handles well, is where to draw the line between the family narrative and context. There is a tendency for what we might today call scope creep, submerging the family in the world around them!