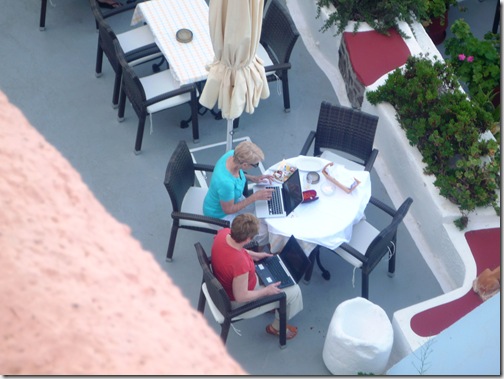 Continuing the story from Santorini afternoon, evening, on the Friday morning we gathered on the terrace for breakfast.

Actually, gathered is really the wrong word.  Straggled might be better, even isolationist. With internet access on the terrace, my family had a bad habit of catching up on their emails!

Over the trip, I acquired a real taste for Greek style yogurt served every where. I also noticed that breakfasts were in part attuned to German tastes. By the end, I really wanted some decent crispy bacon!

After breakfast, we wandered up and then down to catch the bus to Kamari, one of the two starting points for the ruins of Ancient Thera.

By Australian standards, the bus services we found in Greece were remarkably good and quite reasonably priced. Santorini has a populatio 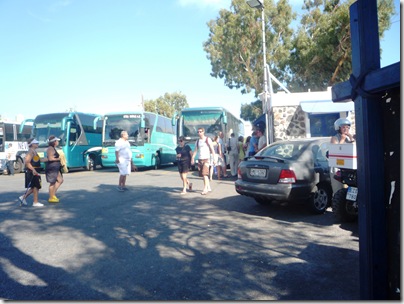 n of something  over 13,000 spread over a small island of 184 square kilometres, 475 square miles. The combination of locals plus tourists supports a quite extensive bus network.

This photo shows the bus station at Fira. And yes, that is a gum tree in the background.

The bus ride to Kamari took us through a different part of the Island.

Again, I was struck by the scattered patches of grape vines planted apart from each other, trained in the shape  low-spiralling baskets, with the grapes hanging inside to protect them from the winds. Santorini's grape varieties are apparently very old and also resistant to phylloxera.

Along with Anafi, Santorini is one of only two places in Europe classified as having a hot desert climate. There is no rain during the summer dry season; the plants have to rely on the morning dew for water.

One thing that I noticed in Greece was the promotion of the local food and wine, centred on the things that were distinct to each island. This is clearly having an impact, including the recreation of activities that had vanished. Tourism promotion in NSW has been a bit of a mess for many y 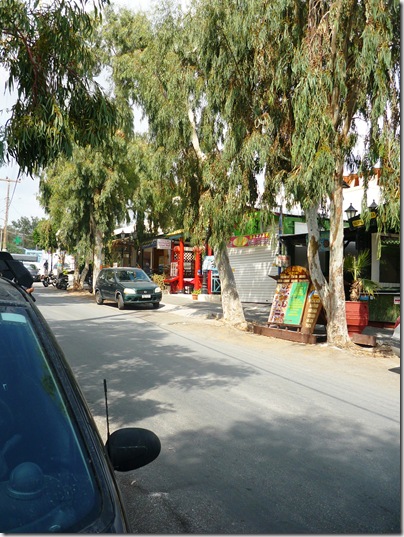 ears. I began to take notes for a possible tourism series.

Arriving in Kamari, we found the tour operator. This wasn't in fact a guided tour as we had thought, but a bus to the site plus a map. It was some time to the next bus, so we wandered off through the streets to have a look.

In an earlier post, Gum trees in Greece, I commented on the way Kamari's gum trees gave the place a superficially Australian feel.

There wasn't a lot of traffic, but you could clearly see the difference between the tourists and locals. It wasn't just that the tourists were on quad bikes and scooters as well as in cars. Local cars were generally older, dusty and often quite battered.

I found a book store and asked about a map or maps of classical Greece.

For plane reading, I had brought with me a copy of Thucydides' Peloponnesian Wars. I hadn't read this since school, and thought that a re-read would brush up my knowledge of some of the places we were visiting.

I was wrong. I found that I could not remember the location of all the places mentioned, nor could I work out where they were on a modern map. I was reminded that when I studied the Peloponnesian Wars for Ancient History Honours at school, I found the multiplicity of names very confusing and indeed quite boring. I just couldn't get a pattern in my m 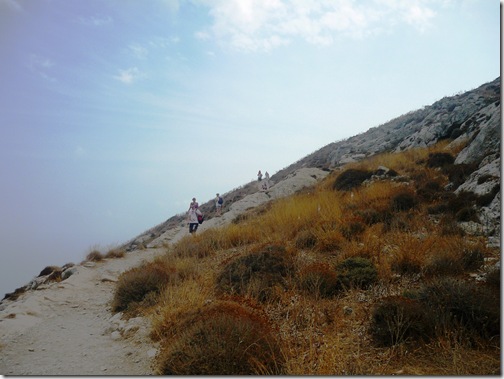 There were no maps of the type I wanted. Instead, I bought a book on Greek ruins, something that did prove useful.

The site of Ancient Thera is located on a barren rocky ridge high above the sea.

The location is not accidental. During the more turbulent periods in the history of the Greek Islands, such sites gave a measure of protection.

Getting there involves a bus trip up a narrow zig-zag road, and then quite a steep walk.

Looking down from the site, I wondered at just how goods including food and wine would have been carried up. Certainly, Thera's inhabitants must have been quite fit!

Initially, I found the site quite confusing. The buildings were constructed from the rock of the ridge. But what, then, was rock and what ruin?  It took me a while to get any form of pattern in my mind. 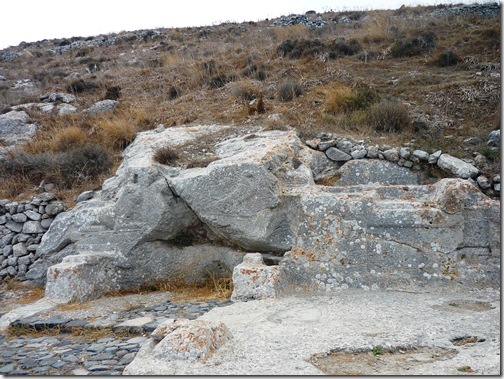 Earlier, I spoke of the volcanic eruption that destroyed Minoan settlement on Santorini and indeed rendered the Island uninhabitable for an extended period.

The archaeological evidence suggests that the settlement now known as Ancient Thera began around the ninth century BC, 700 hundred or so years after the great eruption

Some 1,600 years later, in 726 AD, the jaws of the Santorini tiger finally closed on Thera. A relatively minor eruption covered the city in a layer of pumice, and it seems to have been abandoned.

The exact dates don't really matter. What does matter is the huge time span involved. During that time, Thera and its inhabitants lived through a vast range of changes. Is it any wonder that its history and that of the Greek Islands in general seems so complicated?

The first recorded reference to Thera comes from the Greek historian Herodotus writing in the fifth century BC. According to Herodotus, the Phoenicians first re-settled Santorini, naming the Island Callista. Then came a group of Dorian settlers from Sparta who recognised the strategic 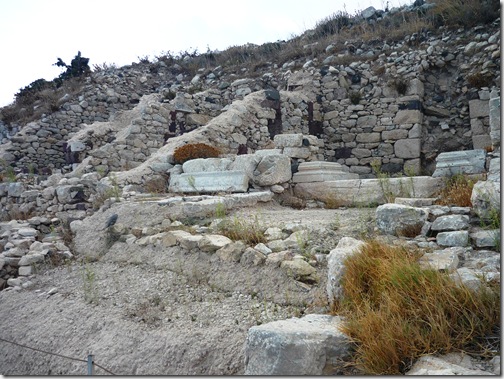 value of the site.

Here both Herodotus and the later Greek historian  Pausanias give accounts of the mythical ruler, Theras, who ruled over Sparta and Laconia on behalf of his underage nephews. After they came of age, he founded a new settlement on Santorini. His name  became attached to both Island and settlement.

I mentioned Santorini's arid climate. Water was very important. The ruins at ancient Thera contain cisterns and drains intended to collect, store and dispose of water. As KVD noted in a comment, Herodotus records that around 630 BC there was a seven year drought that forced the Therans to send colonists to found Cyrenaica in what is today Libya.

Despite the foundation of Cyrenaica, Ancient Thera does not seem to have been especially important in political terms. In the turmoils of the classical period, it sided with Sparta against Athens. The Athenians captured it once, then lost it again.

It became much more important in Hellenistic times.

In 334 BC Alexander of Macedon invaded the Persian Empire. Over the next ten years he established a military empire that stretched from the Adriatic to the Indus River. He also spread Greek influence and language, in part through settlements of his troops.

Modern Greece is quite a new creation, but lays historical claim to two great empires, those of Alexander and later of the Eastern Roman or Byzantium Empire.

This overshadowing of the present by the past continues today. The results have been human and political catastrophes that destroyed the very things that Greece hoped to achieve, reshaping the ethnic map of Europe 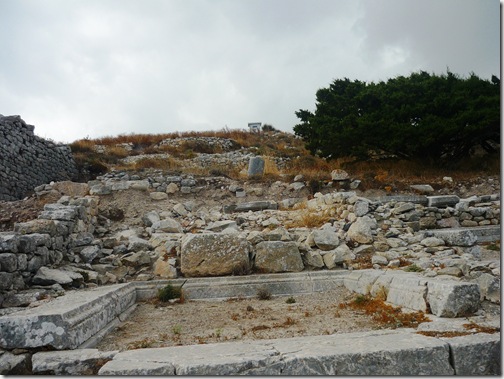 . Following the Greco-Turkish wars of 1919-1922, over one million Greeks who had lived in what was now Turkey for many millennia had to leave for Greece, hundreds of thousands of Greek Muslims for Turkey.

Alexander the Great died in 323 BC before he could fulfil his his ambition of uniting his known world into a single entity. His Empire broke into successor states ruled by his former generals.

One such state was Egypt, ruled by the Ptolemaic dynasty. Today Cleopatra is the best known and also the last member of that dynasty to rule.

In the second half of the 3rd century BC, the Ptolemaic Aegean fleet was stationed in Thera's harbour. Thera was rebuilt for the officers, replacing the former layout with a regular street grid. This forms the core of the ruins that survive today.

We had only a limited amount of time on site because we had to catch the bus back. Miss that, and would have to walk back. Still, by the end I was starting to get a feel for what the place might have looked like, how it might have worked. 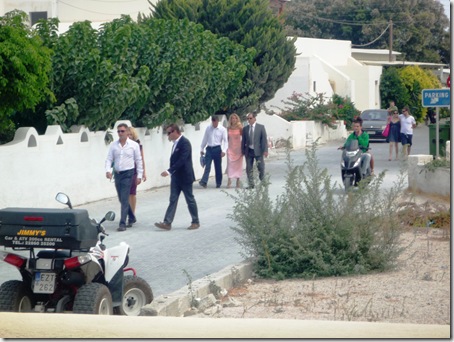 Back in Kamira for a late lunch, my attention was caught by a stream of women dolled up to the nines. Along with partners, they all seemed to be loading onto a bus.

Curiosity caught, I established that it was a wedding, with the bus to take people to the reception. We waited for the bride but, sadly, had to leave before she arrived. By tradition, brides are always late!

Just a reminder, really, that life was going on around us.

Back in Fira we gathered on the terrace for dinner and then went out for dinner. We had hoped to go to a restaurant highly recommended by several guide books, but when arrived there was a line a mile long. We found another place, pleasant enough but nothing special.

After dinner we wandered the still crowded streets while the women did the inevitable window shopping. There I found a sign that I will leave you with without comment. 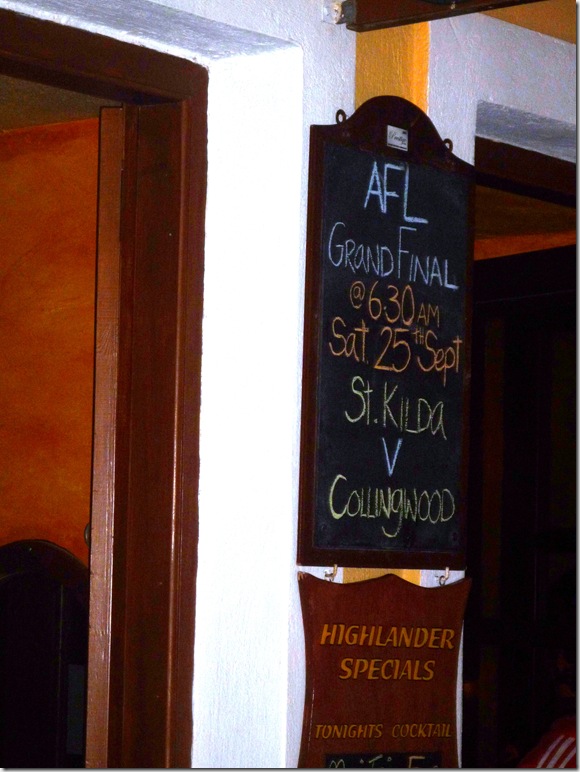