Problems of employment and free speech - Folau, Ridd and Anderson 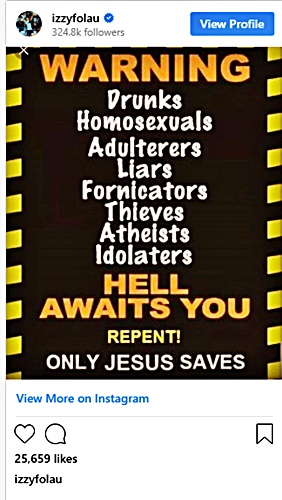 Israel Folau is, arguably, Australia's best Rugby back. A devout Christian, he was sanctioned by Australian Rugby Union for his comments during the debate in Australia on gay marriage. Folau did not believe that it should be approved, that  homosexuality was a sin. Now he has posted on Instagram that people engaging in certain behaviour including drunkenness, idolatry, theft, adultery and homosexuality must repent or go to hell. The quotes appear to have been drawn directly from passages in the Christian bible.

The posts created a storm, focused on the comments on homosexuality. Other elements were ignored.
The ARU gave notice to Folau that his contract was to be terminated. Folau is fighting the case.


"What we are expecting, through the (university's) code of conduct and our enterprise agreement, is that we have a safe, respectful, ethical and professional workplace," deputy vice chancellor Iain Gordon told 7.30. James Cook University's Deputy VC commenting on the sacking of Professor  Peter Ridd  for the way he criticised colleagues on Sky TV and in private emails over their views on climate change.

Professor Ridd was sacked. He appealed to the Federal Court. The Court found that his sacking was unlawful. The judge's views were reported as following:


In his judgement, Judge Sal Vasta found Dr Ridd's termination was unlawful, as JCU's enterprise agreement protected his comments over and above the university's code of conduct.

"It is actually [Clause 14] that is the lens through which the behaviour of Professor Ridd must be viewed," Judge Vasta wrote.

"To use the vernacular, the University has 'played the man and not the ball'.

"Clause 14 means that it is the right of Professor Ridd to say what he has said in any manner that he likes, so long as he does not contravene the sanctions embedded in cl.14 — that is at the heart of intellectual freedom."

Judge Vasta wrote that the university had "not understood the whole concept of intellectual freedom".

"In the search for truth, it is an unfortunate consequence that some people may feel denigrated, offended, hurt or upset.

"It may not always be possible to act collegiately when diametrically opposed views clash in the search for truth."

Note that here we have an apparent conflict between two different policies and procedures, a conflict between general behaviour expected of an employee and academic freedom. This has been a vexed issue in the United States.

Two months after senior lecturer in political economy, Tim Anderson, was first suspended and asked to show cause why his employment should not be terminated for "serious misconduct", the university rejected his appeal. Sydney Morning Herald report.


All staff were required to meet behavioural expectations. “We have always supported and encouraged our staff to engage in public debate and accept that sometimes those views might be controversial," he said.

“We will continue to defend the right of our academic staff to express unpopular views as part of their teaching and research, and recognise this as a vital part of the academic process.

“At the same time, staff must also meet their obligation to engage in debate in a civil manner, and in accordance with our policies and codes of conduct.”

So here, too, we have a conflict between the imposition of two different codes of conduct imposed through contracts of employment.

I have chosen these three cases because they illustrate a point I want to make, one that confuses me.

In recent years, I have mainly done contract work because I wanted an income stream that would support my writing addiction, This means that I have worked for a number of biggish organisations predominantly in the public and not-for-profit sectors. In each case, I have had to do on-line induction training on things like organisational values, code of conduct and, in recent years, social media policies.. This has made me increasingly uncomfortable.

I suppose that this came to a head during the plebiscite on same sex marriage in Australia. I voted yes for reasons I have explained. But when I saw Qantas, a major sponsor of the Australian Rugby Union, come out formally and strongly in favour of a yes vote, I thought what would I do if I worked for Qantas and wanted to campaign for no? Would they fire me or would I just be marked never to be employed again? I concluded that the only way to save my job (or contract) would have been to shut up.

I support the idea of humane and comfortable work places, although I have reservations about the way this may work in practice. Bullying is an example I referred to. Having being involved in a bullying case (I was the one who was allegedly being bullied), I wish that that I had never been.

I was tired and under stress and mishandled it very badly. Instead of calming things down as I had hoped, we ended in a situation where no-one gained. There were only costs.It was a failure on my part.

Linking this back to my my starting point, does an employer have the right to impose limitations on the comments of employees or indeed behaviour outside the workplace? I am driven to the position that the answer is yes.

Employment is a contract, a payment for service. The employee does not have the right to object .to behaviour that conflicts with it's objectives.  One can say that Qantas is hypocritical because it has strategic alliances that are in fundamental variance with its stated values.  But, at the end of the day, that is a matter for Qantas. I's staff can choose to work for it oar not.,

I know that this isn't a comfortable position,There is  are obvious legal questions. But Qantas can only impose its views if it complies with Australian law.

Our universities are now big businesses. They, too, as employers have the right to limit our speech where it conflicts with their commercial objectives. Again, only if it does not conflict with local law.

If you disagree with me, I think that you must address this question. What gives Folau, Ridd or  Anderson the right to object to restrictions placed upon their view by employers? Where do we draw the line?

In a comment, marcellous pointed me to this Australian High Court case,  Comcare v. Banerji. I have recorded the link here because I want to come back to it later. .

Hi Jim, this was a big post covering a lot of subject matter. As for Izzy, I have my own system of faith which I keep very quiet and private and I would never inflict my beliefs on others unless they asked. So I don't agree with the stuff that has been bandied about. It's ill disciplined. I am ready to get flogged, but when one is in the public eye and there is an employment contract, sometimes the things one thinks are private, aren't and it does cause damage to other people and to the profile of where you are working. That's all at this stage. GL.

I don't have much in the way of decided opinion to contribute on this - except to say I think there's a marked difference in the genesis/basis of the restrictions, or proposed restrictions, in these three examples, from the employee's perspective:

Folau is placing his personal religious beliefs above his employment obligations.
Ridd was doing what he is paid to do: extend understanding by ever-questioning.
Anderson was just being childishly provocative; colour me unsurprised :)

There will always be individual cases like this, but what is now more common is the base ambit of employment termination. Seems an uncomfortable fit to "the crime".

Morning both. I think that Folau was pushing the envelope, GL. kvd's characterisation of the three cases strikes me as pretty accurate. I do think that there are more cases of this type than there were, in part because of the impact of social media, in part because of the proliferation of things like codes of conduct. I agree with kvd's point on the base ambit of employment termination.

I find it hard to disentangle all the issues because of conflicting rights and values. To extend my thinking, I probably need to take a few more cases, including the Ellis case from the 1930s that clarified the rights of public servants to comment on political activities.

Still struggling to understand why it is not enough for the employers involved to simply publicly state that they disagree with the views involved, and that "those views are not our views"?

To go past that is entering into speech suppression, and I'm not comfortable with that.

Reality is, in the quoted text above, you should insert the word "commercial" somehow - aka: "these views do not align with our commercial interests"

Thanks, marcellous. I will bring the link up in the main post.

Tangential but on topic in a way, see also thi:

Thanks for the link marcellous. I have read it a couple of times and will do so again because it's reasonably opaque.

As you say, it's tangential but also on topic, although I struggle to express the connection with any great deal of clarity. That is why I need to think further. As you might expect, I bristled at the attempt to involve the tipstaff in that way. Here, I suppose, it goes to the question of the extent to which one's extra-mural should affect one's employment, perhaps more importantly one's employer.

Jim, touting for traffic, I know, but I hope my post on that case will assist your rereading.

Hi marcellous. It did help me in terms of background. More later

Hello all, the Folau issue poses a challenge for me. On the one hand, if you breach your conditions of employment and get sacked as a consequence, actions have consequences. On the other hand, should we support employers of footballers who dismiss players for expressing their religious views.
I think the appropriate response to Israel Folau would have been for his team mates to tell him to go to buggery, rather than to refuse to play in the same team.

Sorry for my own delayed response, Winton. I think that one question, and it was one that was driving me, was the extent to which employers could or should dictate employment conditions not directly connected with the job. Folau's job was to play Rugby. His problem was that he might have affected sponsorship. He was also affecting the image that the ARU wanted to present and, dare I say it, the adoption by the ARU of certain values that were actually independent of its primary role.

I don't think that he was sensible, but the ARU handled the whole thing very badly. On the players, the Pacific Island players generally agree with F's religious views. The reaction of the others to the whole thing seems to be a mix of he damaged the team with some who supported the ARU position because they agreed with it. Mind you, this is based on superficial observation.