Sunday Essay - Tibsy and the pleasure of watching birds 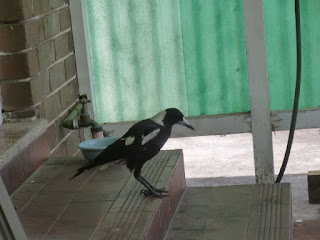 In December I mentioned  that I had acquired a new friend, a young magpie subsequently named Tibsy.

With Avenger's death, the cat food that had been outside and which acted as a magnet for multiple birds ceased. However, Tibsy does come back from time to time and stands there, looking hopeful.

Friday, a friend and I were having lunch outside. Tibsy landed and walked right up to the table. We threw him bits and pieces which he ate with apparent satisfaction.

This morning he was back. He is a bigger bird now with glossy feathers, although that's not clear from the second photo. I gave him a little more bread and he then flew happily away, providing a chorus first from the back of a chair. 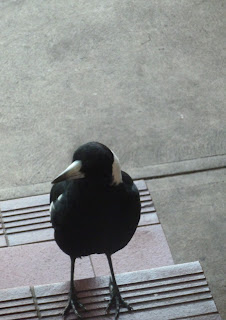 I spend a fair bit of time sitting out the back. It's peaceful despite the constant background murmur of traffic and the sometimes noise of planes when the flight path brings them this way.  The birds also provide constant if sometimes noisy entertainment especially in the mornings and evenings.

There are a lot of birds in this area, despite the presence of some cats. The Botany Wetlands used to stretch from Centennial Park down to Botany Bay. The remnant wetlands start just down my street and are a haven for a variety of birds.

Then you have all the birds that have adapted to living with humans in urban areas. These include that now ubiquitous pest,  the Indian Myna bird as well as the bin chickens, the White Ibis.

I have a love hate/relationship with the Mynas. They are very noisy, talking all the time. They are also aggressive - I think of them as ether the spitfires or perhaps stukas of the bird world, grouping together in a wing formation to mob and chase away much bigger birds.

The rise of the urban bin chicken is relatively recent. Ibis are wading birds that have adapted to the availability of food. They are very common in this area as are pigeons. Ibis may be a royal bird in Europe, but they hardly seem royal when pecking at a garbage bag to open it. And they shit. I know all birds do, but the Ibis roost in the tall palm trees and deposit their droppings from a great height to the sometimes distress of passer-byes. The bus stop I go to is quite dangerous with Ibis roosting on both sides of the bus stop.

My interest in birds is relatively recent. Growing up we had bird books and used to colour them in, but then my life style took me well away from any bird studies. Indeed, I used to regard bird watching as a rather quaint hobby, a bit like watching grass grow.

I appear to have changed my mind. It's hard not to become interested when one's own backyard is part of bird central to the point that I can even recognise individual characters. It's not an addiction yet, but it a very pleasnt way of passing the time while thinking of other things.
Posted by Jim Belshaw at 10:50 am

I have also begun to take an interest in my neighbourhood's birds, admiring the plumage of pigeons or listening to the songs of birds. These dinosaurs are noteworthy.

It becomes addictive, randy! It becomes very interesting once you start recognising individual birds and pairs.

I won't one-up with the variety of birdlife around me, because I'm country - not city - based. But if you have even a small plot of scratch area I could not recommend more highly the humble chook.

I find them endlessly fascinating, and they repay me for my daily feeding with 30 seconds of absolute love, 4 eggs, and hours of quiet contemplation. As I type this, the 6 of them are mooching round my back door, making quiet, doleful, gutteral sounds - because it's past their feed time :)

Lovely description, kvd. I have been thinking of chooks and other things - bees come to mind - for my new domain The problem is restrictions on rental properties. A post perhaps at some point