Eggs, egging and to egg somebody on - a note

The failed attempt to egg Prime Minister Morrison at the CWA (Country Women's Association) conference in Albury was not a good look.   The satirical publication, the Shovel, reported it this way on Twitter:


"A young woman failing to hit the PM with an egg from 20cm away tells you everything you need to know about the skills shortage in this country. The Shovel on Twitter" 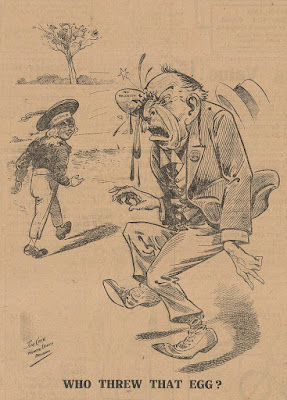 I know that I shouldn't, but I had to laugh. The incident followed an earlier and more successful egg attack on Senator Fraser Anning.

Eggs have a certain tradition in Australian politics. In 1917, an egg was thrown at then Prime Minister Billy Hughes at Warwick in Queensland. One outcome was the establishment of the Australian Federal Police.

Writing on Ten Daily (These Witless Eggers Could Scramble Our Democracy) Hugh Riminton suggested that the Albury incident could have the effect of limiting political activity and our access to politicians by requiring greater security. I agree with him. Billy Hughes is a case in point in that the incident had long term effects.

Still, I think that there is a certain humour in the case. It was the CWA who are famous for their baking and the alleged offender, not a CWA member, had an entire carton of eggs with her.

Jumping sideways, I was surprised to learn that the phrase to egg someone on, to encourage them to do something unwise, actually had nothing to with eggs. It apparently comes from“eddja” which in Old Norse  means to incite or push someone to do something. I must admit to a certain sense of disappointment.
Posted by Jim Belshaw at 8:28 am