Saturday morning musings - why the survival of the ABC is important

Michael O'Rourke (Twitter handle) and I have been friendly for a long time:. he comes from Gunnedah, me from Armidale; I went to TAS, he to De La; we share many common interests. In all, I regard him as a thoroughly good thing. Still, sometimes  I do shudder. The ABC(Australian Broadcasting Corporation) is a case in point.

On Twitter, Michael describes his views in this way: "Right-Libertarian. Mere facts tell us nothing: I want the argument. Poetry; politics; history esp. Byzantine; doowop/soul/Motown". Reflecting these views, Michael has has argued for the privatisation or the closure of the ABC. partly on the grounds that the state has no role in this area, partly on the grounds of the ABC's left bias. When I protested, he allowed me a limited service of crop reports and weather forecasts!

As I said, I regard Michael as a thoroughly good thing. I am repeating his views not so much to attack them, although they do, but as an entry point for a defence of public broadcasting, the  ABC and SBS. 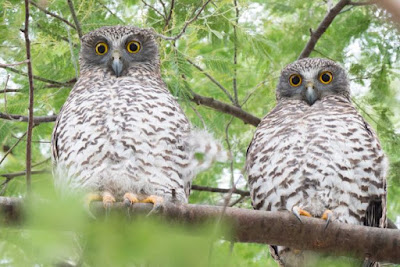 Before going on, have you heard of the Powerful Owl? . I hadn't until I listened to this ABC Radio National program Powerful owls have settled down in Melbourne's suburbs, but it might not be for long.I listened on the radio and then read the story on-line.

I was quite fascinated.These are powerful predators who pair for life. Their survival depends on food, roosting trees and nesting trees. Food is around, so are roosting trees, but the number of nesting trees is in decline. Without that, they cannot breed.

To try to check and track the birds in the urbanising environment of outer Melbourne, researchers need to attach GPS trackers. But capturing them is a fascinating challenge involving large nets and beanies. The tracking results provide clues to habitat design, the location specific ways that might harmonise urbanisation with the protection of wild-life.

This brings me to my first defence of public broadcasting, the way in which stories like the Powerful Owls  enrich my life.

Woodford Folk Festival is one of Australia's  best known festivals. 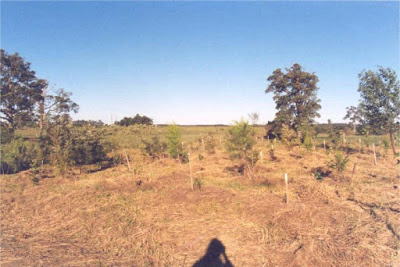 In 1994, the growing folk festival moved from its original home in Maleny to newly purchased land at Woodford.

The land was so degraded it was hard to find a shady spot to camp over the hot Christmas-New Year festival period.

This ABC story will tell you how the site was transformed over the next 24 years.

Australia is a large and disparate country with many sub-stories. Woodford is only one of a large number of good stories about the way life is being transformed across the Australian continent.I try to report on those changes.

The first effect of the internet was to increase access to information,to make my life easier. But since the paywalls went up, access to information across the land has become more limited. Michael regularly links to the Australian stories, but that's not much use to me. I can't read them.

With the exception of the times I buy the paper, the views of the Australian and indeed all the Newscorp papers are a black box. I know that there are certain outputs, I could hardly not be aware of that, but generally those papers live in an echo chamber of their own making.

At local level, I read and value the Southern Courier, although working away from home again means that my copy just gets chucked somewhere on the roadway.But should I want to quote stories they are on the Daily Telegraph site and are behind fire walls. This strikes me as commercially dumb.

In Northern NSW I had largely given up reading such papers as the Grafton Daily Examiner owned first by APN and then Newscorp because of firewalls. Recently, . the  Fairfax Papers have introduced their own fire walls frustrating the bejesus out of me. I can't even read my own columns. I think that approach is commercially stupid, although it may now change following the sale of the Fairfax regional newspapers.

I am straying a little,  With all the changes, the ABC with its regional networks is the only media source in Australia that one can access broader Australia regardless of where you live.

I suppose that I should address the question of bias since that seems to be one of the two main arguments against the ABC.

Let me be quite clear on this. Individual ABC programs and people do have have biases, slants.

I switch off Stop Everything on ABC Radio National because I think that popular culture is more than LGBTI issues and minority representation. I have started switching off  Awaye!, the Arboriginal program presented by  Daniel Browning, a fellow New Englander,  because it is now too insular  and message ridden from my viewpoint and no longer interests me.

I do still listen avidly to  Phillip Adams and Late Night Live when I can. I know his biases, I have listened or read about him for more years than I care to remember, but he actually has some interesting stuff. I am quite capable of adjusting for his known biases.

I could go on, but I do not wish to become too boring. There is bias on the ABC. How could there not be? Do we expect even political reporters to give up their particular perspectives to influences their questions? We can, I think, expect them to not allow those perspectives to distort their judgement. Sometimes they fail. Broadly, I think that they do a pretty good job here.

As a large organisations, the ABC is a broad church that reflects the diversity in the Australian community. As a national organisation with genuine regional outreach, they reach into multiple regional homes. Their people become our friends even when we have never met. I still follow Tawar Razaghi even though she has moved to Domain. The loss of Kelly Fuller to the Illawarra is a genuine loss.

I do not expect the ABC to be abolished, although I do recognise threats to its funding and independence. That decision of the Liberal Party conference to privatise the ABC was ideological posturing by a particular group remote from Australian views! (Sorry, Michael).. That was why I  did not take it seriously.

The ABC has been part of my life since I was born. I will not give it up no matter how much I disagree with particular programs or views. I think that I am not alone. I think that country people in particular would go to the barricades if there was a real threat to close or privatise the ABC.

As I said,  I don't think that there is a real threat.  I just wanted to establish a clear position on something that I believe strongly.
Posted by Jim Belshaw at 5:32 pm

Hear! Hear! JDB.
I absolutely agree with you. It's really quite simple; if there's a program (on radio or TV), the instrument (pace Sandy Stone) has an off switch, which is so simple, that even a small child can use it. Having said that, I don't think the ABC is anything like the animal it used to be, but I suspect that has much more to do with funding cuts and corporate 'dumbing down' to try and attract more lower common denominator viewers/ listeners. Many years ago, I lived in a very conservative Southern state of the USA, mainly during Reagan's very conservative tenure as POTUS. The USA did not then have, nor does it now have, a national (ie govt owned, for want of a better descriptor) broadcaster. Public TV/radio was a godsend in many ways, but the extraordinary amount of necessary public fundraising was mind boggling. general consensus of opinion, was that it was only for the 'elites', and therefore unAmerican, and undoubtedly run by the 'liberals'; in USSpeech, hard core lefties, if not outright commies. Dunno about your kids, JDB, but mine were raised on Sesame Street, and later, back here, on Playschool as well (yep, that other well known leftie program). Plus ca change, plus la meme chose. Kate

- all are biased.
- mostly reflecting their owners' views.
- deal with it.

- It is no more, nor less, biased than any other media platform.
- you explain why the "ABC is important" to you. But not more generally, media-supply-wise.

- often thought "libertarian" and "bloody-minded contrarian" are interchangeable terms :)
- wouldn't want his ilk, or his oppo numbers on the looney left, in charge of anything more consequential than Friday night bingo.

You wrote:
"On "media organisations"

- all are biased.
- mostly reflecting their owners' views.
- deal with it."

- It is no more, nor less, biased than any other media platform.
- you explain why the "ABC is important" to you. But not more generally, media-supply-wise."

I am not opposed to bias if by that you mean points of view so long as that bias is clear to readers. I do make a distinction between reporting and opinion. I think that the second has come to predominate in ways I do not like.i do think that the Sydney Telegraph is on the bias register is more biased than the ABC, especially in it's broader coverage. And I did explain why I thought that the ABC was more important media supply wise because with the shifting media landscape it is now the only source of accessible information in some areas.

Kate, I think that the ABC funding cut backs have clearly affected coverage. And I agree on your US point. PBS does make some interesting programs, but it is a shadow of the ABC.

Yes, I expect I should apologise to both your friend and to the "looney left" as I termed them.

The problem with their unicorn factories, from both ends of the spectrum, as I see it is that their "solutions", while simplistically attractive, are not scalable.

And therefore I find both the looney left and the libertarian "right" to be composed of impractical die-hard non-entities, whose only claim to effective outcomes is that of distraction, pure and simple.

"The problem with their unicorn factories, from both ends of the spectrum, as I see it is that their "solutions", while simplistically attractive, are not scalable.

And therefore I find both the looney left and the libertarian "right" to be composed of impractical die-hard non-entities, whose only claim to effective outcomes is that of distraction, pure and simple."

This made me smile, kvd