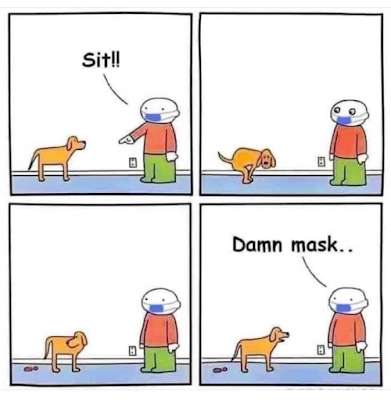 Another graphic that made me smile. It's just so covd-19! Again, I do not know the original source.

It's one of those graphics that is unlikely to survive the pandemic except perhaps as an historical artefact because the play on words is so very specific to current events.

It's hard here in this little part of the world in which I live to really appreciate the scale and impact of covid-19.

To my knowledge, we have had no cases of community transmission here, although there were a small number of cases where the disease was caught elsewhere,  The whole New England North West area has had no known active cases since the end of May. The effects of covid-19 have come not from the disease, but from the measures used to fight the spread of the disease.

This is not a complaint, although I have said that the measures imposed lacked nuance and could have been better tailored. I think that the Melbourne outbreak now coming under control demonstrates how quickly the disease can spread.

One thing that has surprised observers is just how compliant Australians have been in observing the restriction. There have been small protests as well as cases of non-compliance, but overall compliance has been high. This conflicts with the image that Australians and others have of Australians as individualists, cautious about and likely to rebel against authority.   Hofstede Insights describes Australians in this way:

The fundamental issue addressed by this dimension is the degree of interdependence a society maintains among its members. It has to do with whether people´s self-image is defined in terms of “I” or “We”. In Individualist societies people are supposed to look after themselves and their direct family only. In Collectivist societies people belong to ‘in groups’ that take care of them in exchange for loyalty.

Australia, with a score of 90 on this dimension, is a highly Individualist culture. This translates into a loosely-knit society in which the expectation is that people look after themselves and their immediate families. In the business world, employees are expected to be self-reliant and display initiative. Also, within the exchange-based world of work, hiring and promotion decisions are based on merit or evidence of what one has done or can do.

While there is some truth in this description, it also gives a misleading picture.

Australians are egalitarian by nature, democratic in tone. This comes through in forms of workplace address such as the use of first names. But Australians are also very compliant, something that John Hirst explores in The Distinctiveness of Australian Democracy (p112 ff). Further, while Australians may be critical of governments and politicians, there is also an expectation that Government will provide services, an expectation that dates back to early colonial days and the difficulty in providing services to a relatively sparse, geographically dispersed population.

This difficulty fed into another element in the Australian character, one also in conflict with the idea of the individualist Australian, the volunteer ethos. Australia has a remarkable volunteer tradition, one that began in the early colonial period when people gathered together to meet local needs. We have seen this most graphically in the recent response to the bush fires. Australians looking after Australians.

Earlier, I said that while I supported the various restrictions in a general sense, I also thought that they lacked nuance. From a purely personal viewpoint, I think that some of the restrictions have become too onerous and make reducing sense when geography is taken into account. The difficulty here is that while Australians can be compliant and collectivist, this holds so long as the restrictions seem sensible. Australian history suggests that once people conclude otherwise, then compliance drops sharply, with people deliberately looking for ways around the restrictions, Katy Barnett's piece in Quillette, Something is Rotten in the State of Victoria, is instructive here.