Archaeology and the boilings frogs of media change - how to respond? 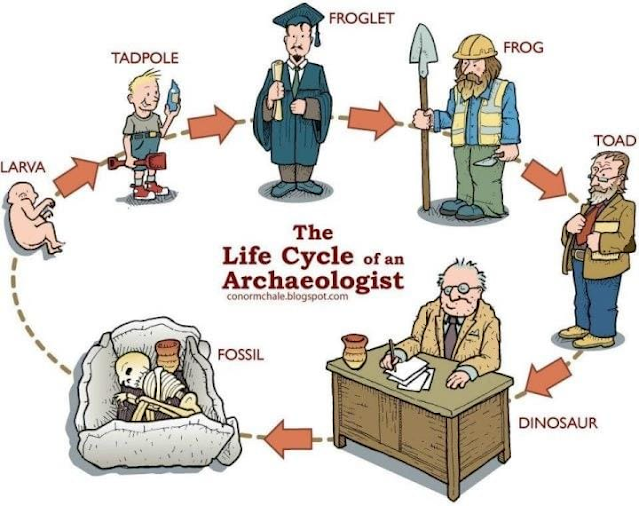 I must say I enjoy many of the memes and graphics that travel around Facebook. As someone who once wanted to be an archaeologist, this one made me smile, although I think that I have somehow jumped from the tadpole to dinosaur stage without going through the intermediate steps! It's only in recent years that I have gone back to archaeology and then as a student of results rather than a practitioner.

While I enjoy Facebook, the current debates about Facebook and Twitter as news sources strike me as very odd. I follow a number of news outlets on both, but the platforms are not of themselves news sources.

For better or worse, I am a news junky. When I get up in the morning, I start by checking the BBC. Why the BBC? It's complicated. I want a non-Australian viewpoint. They also have a reasonable range of stories, although their international coverage is quite weak in some ways.And sometimes they are so very English! Then I check the ABC. After that I go to other sources. As firewalls have extended, as the content in news outlets has diminished, the length of time it takes me to review material has declined. What once took me several hours has diminished to 45 minutes.

I think that I was best informed back in the eighties when I was a branch head at the industry department in Canberra. As a branch head, I had access to all the cables from Australia's overseas posts. Well, not quite all. While I had a top secret security clearance, there were need to know cables. If I were to see such cables they would be carried by hand, the security officer would usually stand by while I read them and then would carry them away.

Many of my colleagues regraded reading the cables as a burden. They would simply sign the folders of and send them on. I always read them. I loved the country reports in particular even where they were peripheral to my ordinary needs. I learn't so much about sometimes arcane matters.

Those were print days. I matched the cables with what I read in the newspapers and news magazines. When the internet arrived there was an explosion in on-line material. By now my interests had shifted. My browsing expanded to include those new interests.

For example, each week I would check dozens of newspapers and other sites located in Northern New South Wales. I would prepare consolidated material and analysis. I knew what was going on, as an analyst could consolidate into new interpretative material. Internationally, I would consciously check news sources in multiple countries to check the unconscious biases imposed by my Australian location.

All this then declined. At a purely personal level, I found that print publications had declined, as had my ability to afford those that were available.  Entire levels of on-line journalism were now behind firewalls, while the print papers had become very thin.

Covid-19 has added to my woes. I have just realised that the audience for my weekly newspaper column has been effectively wiped out by Australian Corporate Media instability and changes. Nobody knows where to find me! I knew that my reach was declining even among dedicated followers.

The woman who has cut out everyone of my columns over the years can no longer do so because there is no print paper. Those on the internet or who have a subscription to the PDF edition of the paper cannot find me. The PDF edition has shrunk from twice a week to once a week and does not always have me. When I appear on the website. access is limited to three per month.

The columns are also variously tagged. Once they were history or multiple tagged including history. Now it seems random. They could be found. Now they are lost. In saying this, I am not being critical of my colleagues. With diminished staff trying to maintain the ship, there is little room for thought or consistency.

You know the story of the frog in boiling water? It just keeps getting worse but the frog is not conscious of that until it boils. I feel a little like that.

It came to a head this week. I was talking to my history group. It's just a small group, part of my bigger audience. Most of them came to the course because they read my columns in the first place. Now I find that none of them have seen a column in three months whether on-line or in the PDF version of the paper. They didn't know that I was still writing. I find that depressing! Why am I bothering?

I have written a fair bit on the media changes. Now I feel the need to get out of the hot water. I'm not talking specifically about the column, more about the general approach. I do have ways that I can build my independent approach despite the changes, but all that takes time and a new focus. That comes with costs. We shall have to see if I can do it!

Best wishes Jim to find the way soon. You will. Onwards and upwards!!

Hi Noric. I have been reading your Armenian material with interest. One of my problems is lack of time given the course that I'm writing and running. I know of some options, but they all take time to set up. Sigh!