From time to time I have mentioned the introductory course I am presently delivering through U3A on the history of Australia's New England, the New England Tablelands and the surrounding river valleys to the west, east, north and south, It's an ambitious course, far more ambitious than I fully comprehended when I started.

I began by tracing the story of the Aboriginal peoples from out of Africa, the journey to the ancient continent we call Sahul, the spread across Sahul, the arrival in the area I call New England. We then explored the impact of the Last Glacial Maximum that came close to wiping the Aboriginal peoples out, the subsequent recovery finishing with an attempted synthesis of Aboriginal New England on the dawn of invasion. In delivering, I have attempted to integrate archaeological, genomic, linguistic and ethnographic evidence.

Colonial New England began with the penal (1801-1840) and pastoral expansion (1820-1851) periods and then looked at the impact on Aboriginal society: the impacts beyond the moving frontier, then uneasy co-existence, active resistance and finally survival in the face of over-whelming disruption. I then turned to colonial history and society, mining (1851 to 1890s), agriculture (c1861-1910) and the rise of the towns. In all this I looked at themes including politics and self government, education, sectarianism, architecture and changing daily life.

We are now charging though to the end of the twentieth century.

In delivery, I have tried to integrate the local and regional with the global story, outlining the linkages between the New England story and events elsewhere. Increasingly, I have devoted part of the lectures and discussion to summarising past discussions and to answering questions raised by my group, questions that often extend beyond formal course scope. Most recently, for example, I was asked about the history of Aboriginal voting rights in Australia.

The story here is not as it often seems. Many people believe  that the 1967 constitutional referendum granted Aboriginal voting rights. That is not true. The story dates back to the 1850s when with responsible government Aboriginal males were actually eligible to vote in NSW, Victoria and South Australia so long as they met the general eligibility requirements. From there the story becomes complicated varying between jurisdictions and entwined with changing social attitudes that varied between jurisdictions. So last week I tried to explain all this.

The course has been greatly disrupted by covid 19. When I began I scheduled 18 lectures plus twice monthly discussion groups with the first course finishing in June. Then everything stopped. I knew that the interruption was (hopefully) temporary. You would think that I would continue preparation, but I found it hard to do so.

When we resumed it was under strict distancing requirements.  I had started with some 45 internal attendees. Some I knew had dropped out because the course did not suit them Now I had a maximum of 12 people that could be accommodated in one group excluding me.

U3A found a second slot for me so that I could accommodate 24 students. I had to survey the group a number of times to find out what people wanted to do. Some dropped out entirely.  Some wanted to transfer to a first semester next year course, committing me to running again. Eighteen were keen to continue, requiring two weekly lecture sessions with capacity to switch between sessions since we were under the maximum levels. The discussion group could continue as was since we were below maximum levels.

The net effect was that my face to face teaching hours went up by over a third. To try to extend interest in and knowledge of New England's history, I had planned to run an external group via Facebook but this hit the dust because of time constraints, However, I do hope to catch up here.

To teach is to learn. My reduced cohort may be relatively small but they are enthusiastic. They push me by questions and also pressure me to provide the written material I have promised.

This is fair enough, mind you, although I am struggling to deliver. Thursday/Friday I took them on a fast canter though political parties, groups from the emancipists/exclusives to the end of the twentieth century.   I did so because they were getting lost in shifting names, struggled to see how things fitted together. But they do need the slides to refer to as a reference

The course has coincided with the most febrile period I have known in terms of issues and debates. This affects both the questions asked by the group and the words I use in presenting material.

I had intended to make this the central issue  in today's muse, but then got sidetracked into others things so will have to come back to it. An example, I suppose, is the use of the word British. What, actually, does this mean? Are the Irish British? 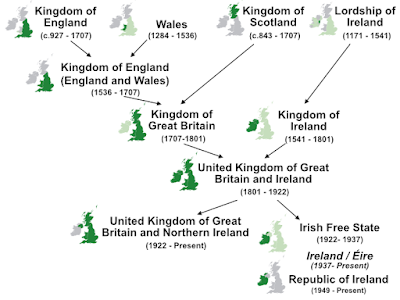 This diagram from Wikipedia shows the changing political structures on the Isles. Technically, between 1801 and 1922 the word British could be applied to the Irish because they were part of the United Kingdom of Great Britain and Ireland. Even then, and as made clear by the name, Ireland was separate from Great Britain.

The approach that I am trying to follow  is to explain my use of words, as well as my own biases.  In the case of British, I made my reservation about the term clear, generally limiting the use of the word to the British Government or at least official activities. Instead, in talking about European settlement patterns I refer to the English, Irish, Scottish and Welsh.

There were, in fact, very few Welsh. Ranked by size, the new settlers were English, Irish, Scots, Chinese and then Germans. Each group had its own identity and culture. Their relative composition within the New England population varied compared to the rest of NSW or indeed the other Australian colonies. You cannot understand New England's history unless you understand these differences.

My use of the term Germans is another example of labeling problems. Germany as a state entity did not exist until 1871. When I use the term Germans prior to 1871 I am referring to German speakers. I had to explain this in the context of immigration agent Wilhelm Kirchner, in so doing introducing the group to a little of German history.

I will come back to some of these issues later. For the moment, think of this as a progress report.