Discomfort and discordance when your own past becomes part of history

It’s strange when you read a history that is analysing events that you lived through yourself. The events are familiar, of course, but there’s also an element of surprise at things you didn’t realize at the time, and at the matters that the historian has placed emphasis on, when you weigh them against your own perspectives and memories. It’s also rather disconcerting to realize that your own lifespan is now considered ‘history’.‘ The Resident Judge of Port Phillip reviewing Michelle Arrow's "The Seventies: The personal, the political and the making of modern Australia." 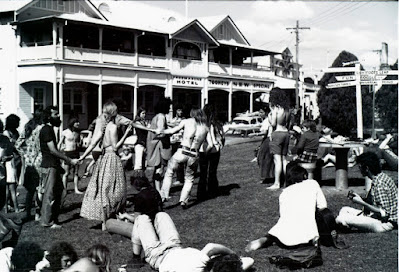 I must say that this comment struck a real cord. There is something disconcerting about about finding part of your life the subject of history, to find that what individual historians select as important jars with your own recollections and lived experience.

Historians select their own questions based on what they are interested in and consider to be important. Inevitably this is based on the present. But if you lived through a period, if it's still in your current memory, then those selected topics may seem peripheral or, if important, less important than other questions you considered to be important at the time. Your views may be re-balanced with time and new experiences, that is inevitable and indeed desirable, but there is a discordance.

This has been much on my mind because of the introductory course I have been delivering on the history of the broader New England, the New England Tablelands and surrounding river valleys. The last part of the course covered the period from 1945 to 2000, including the 1970s. Here I had to choose what I should focus on, what to include and exclude, how much weight to place on particular issues, recognising that I could not cover everything. I also had to recognise my own biases.

My approach was also influenced by the fact that I was looking forward, not back. By the time I came to the 1970s I had spent multiple lectures sketching out the area's history. I needed to address change from the perspective of what had come before. Looking forward with questions dictated by the past is very different from looking back with  questions dictated by the present.

Let me try to illustrate.The 1970s were a tip decade, one that marked a break between the Australian present and past. This was also a period that marked the start of a structural decline within New England, this actually began earlier but accelerated, that would consign many of the things that we had talked about on the course, the dreams and aspirations, to the dustbins of history. I had to address this, to try to explain.

Consider the rise of the counter-culture movement that included the Aquarius Festival but began in the sixties.

This was part of a global phenomenon that had considerable local impacts in social and cultural terms. I tried to explain that. However, the combination of cheap rural land associated with the decline of dairying, the rise of the surfing culture and the counter-culture movement marked the start of a sea-change rush in the 1980s that would, among other things, totally disrupt the balance that had existed in populations terms between coastal and inland New England. In so doing, it would disrupt and then break the sense of Northern identity that had previously facilitated cooperation between local and regional areas despite intense parochialism.

That is one example. There are many others.

I was at least a bit player in many of the events I am trying to teach. In some case, I am still a player.

This raises obvious questions of perception and bias.  But it also creates a sense of dislocation at many levels. I read histories that conflict with my lived experience. Then in trying to teach, I have to challenge my own perceptions and memories. It's a sometimes uncomfortable experience!

From the perspective of someone who was too young for most of that, I've always felt that the 60s didn't really come to Australia until 1972, and that after 1975 we somehow went straight to the 80s without really having any 70s. I suppose you could also think of 73-75 as Australia's "short" '70s.

Maybe a bit further east but still within your definition of "New England" I think the beef crash ('73, 74?) also contributed to the availability of land at a low price. Anecdotal evidence only here: one such alternative community on a piece of promised land spotted by musicians taking a road-tour break from a production of "Jesus Christ Superstar" (and, on their part, I'd guess bankrolled by the sustained employment that had given them).

Evening marcellous. I'm a little older than you, so to me the sixties were the golden age. That was the break-out from the 1950s, the time when new ideas raged. I think with the seventies you have to remember the oil shocks and stagflation.

I was recruiting for Treasury in the second half of the seventies. There were a rising number of graduates seeking a diminishing pool of jobs. I guess that that changed attitudes. I think that your idea of the short seventies is pretty accurate.

I had forgotten the problems with beef. That certainly affected land prices. Where was the community you talked about?

Roughly speaking, a bit inland, off the Bruxner Highway.

Thanks marcellous. I have to map some of these locations at some point.