Merle Curti and the US elections 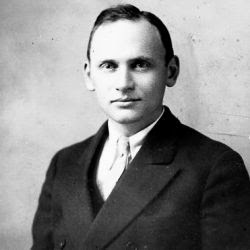 Merle Curti in 1929. First published in 1944, his book, The Growth of American Thought, remains a masterpiece.

The American elections are on as I write. While I think that Mr Biden is in front, I  am still unsure as to the final result. It could go either way, I think. We may know by the time that you read this.

Reading and listening to the election commentary, I was reminded of just what a complex place the US is.

I had come home to Armidale to work on my thesis, staying with my parents once again after many years. I did not know it, but both would be dead within three years, making the time very important in retrospect.

In many ways, these were a golden two years. I had no responsibilities and could just enjoy myself, dropping back into patterns from my undergraduate years. As part of this, I read and read, books that had nothing to do with my thesis. One of those books was Merle Curti's The Growth of American Thought.

I had no idea that it was quite a famous work. I just plucked it off my father's shelves. There, sitting at night on the bed in my unheated bedroom (it was winter in Armidale), I devoured the book over a week. I had studied US history to some degree, I was interested in US politics, but the book showed me how little I knew.  That view was re-affirmed later when I visited the US for the first time. Sure, I was knowledgeable, sometimes knowing more of US history than the people I spoke too, but I knew that I didn't properly understand the variety and complexity of regional variation across America.

Later the book would inform my own own approach to writing about the history of New England. Curti dealt not just with the headline, big picture stuff, but with the patterns of thought that evolved in the homes and on the farms; with the agricultural societies, the almanacks, land grant universities and the fight for education. He deals not just with the elites, the educated classes that feature in so much discussion, but with the broader society with all its regional and other variation.

I have not read the book for many years, my memory may be imperfect, but I am talking about its lasting impact in my memory. I hadn't realised until quite recently how much it had affected me. Now when I am trying to talk about patterns of thought and regional life in my area of interest, when I switch from history societies to museums to agricultural shows, to books and art, to varying political views and philosophies,  I feel that I am following Curti.

The US elections will work themselves out.  The patterns across the US show the variety in US life and society. I don't think that it helps, although it may be interesting, to apply universal standards or conclusions, dictated by particular view sets. Better, I think, just to watch and then conclude.