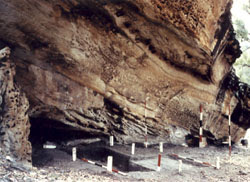 Photo: Archaeological excavation, Graman near Inverell, 1966. Led by Isabel McBryde, this was one of the most enjoyable digs I went on.

We stayed in an old farmhouse nearby, walking across the creek and up the hill each morning to the rock shelter site. At night, we played cards and word games in front of a fire, a necessity because New England's western slopes can get very cold at night.

As foreshadowed, this post begins a stocktake of my various writings relevant to the Australian aborigines. In doing so, I am trying to present an alternative view to what I perceive to be weaknesses and biases in current discussions.

Because it is a stocktake, the posts are quite long and can include a lot of built-in links. However, I hope that I have provided enough information so that you need not click-through unless the topic is of particular interest.

On 20 December 2006 I put up a post, Australia's aborigines - an introductory post, on this blog in which I outlined the evolution of my own views on the Australian aborigines. This post sets a context.

We all write from our own perspectives, drawing from our own experiences. In talking about aboriginal issues I necessarily write as an outsider simply because I am not aboriginal. For those interested in the aboriginal perspective, I refer you to Neil Whitfield's page, to the National Indigenous Times, to Koori radio.

Accepting this, the core of my charge in the 20 December post can be put quite simply.

I have been interested in the aborigines for a long time, since the sixties. By the 1980s I thought that the aboriginal people had come an enormous distance.

Starting from a base of deprivation and prejudice, they had clawed themselves up. From no graduates (I think that Charles Perkins was the first aboriginal graduate) there was now a steady stream. Aboriginal art was entering the global main stream, there were aboriginal singers and dancers, aboriginal theatre, aboriginal writers. In individual communities, major aboriginal families were becoming recognised as founding community families, providing a link to the past.

This is remarkable progress by any standard in such a short time period.

How then have we gone from this point of success, of achievement, to today's position where discussion on aboriginal issues is so overwhelmingly negative in tone? Have the aborigines stopped making progress? Clearly not, although this can be hard to discern in the midst of the negativity and constant discussions of problems. Then why has it happened?

I think that two linked things have been primarily responsible for this change in perception.

The first is the overwhelming focus among many in mainstream Australia on the wrongs of the past, a focus that has generated a response in both the aboriginal and broader Australian communities. Yes, past wrongs need to be identified and addressed. But the focus has been so powerful that it has swamped other things, twisting perception and discussion.

The second is the failure of official policy towards the aborigines. Central to this has been the perceived need to recognise and treat the aboriginal people as an entity and then to focus on aboriginal problems and needs.

Yes, there are times when we need to do this. But in the majority of cases policy needs to be localised. Australia's aborigines and Torres Strait islanders were not a uniform group in 1788, even less so today. There are huge cross-country variations. The perceived need to establish uniform national approaches guarantees, in my view, policy failure.

This problem is complicated by a further one, the distortions created by the attachment of the label "aboriginal" to specific problems.

The fact that an aboriginal community faces a problem or difficulty does not of itself make it a specifically aboriginal problem as compared to a problem faced by specific aborigines . The problem may in fact be a subset of a broader problem shared by others and needs to be addressed in that broader context.

Care needs to be exercised even where the problem is concentrated in specific aboriginal communities. Take petrol sniffing now, I think, established in popular perception as an "aboriginal" problem needing to be dealt with in an "aboriginal" policy context.

To what degree is petrol sniffing a problem just of specific communities needing to be addressed in the context of those communities? To answer this, we need to know how wide spread the practice is.

To what degree is petrol sniffing a subset of other problems in those communities that also need to be addressed? This is clearly the case, so we need to understand the problems and linkages.

Finally, to what degree have we turned petrol sniffing into a national problem by classifying it as a national issue? For example, has the practice in fact spread among rebellious aboriginal young people (and possibly others) because of the publicity? I have no idea, but I suspect that it might be the case.

In my next post I will look at some conceptual issues that I think are relevant to the discussion.