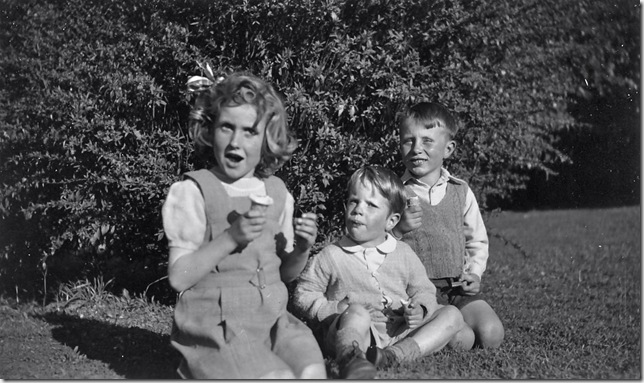 This photo from cousin Jamie's collection shows Cecily (family friend), brother David and I at Mann Street, our grandparents' house.

As a child, the world is a big place. We roamed and roamed widely.

Mann Street, a block and a half from our place, had a big garden. The equivalent today of four standard quarter acre blocks.

There were pine trees at the back and front. The back ones were too scraggy to be of much use, but we spent a lot of time up the front ones, playing games and watching the world go by.

At the front on each side of the block were two small garages about two hundred yards apart. Nearby trees made it easy to get onto the roofs. This was magnificent for hide and seek.

The front of the house (this was actually at the back overlooking the town) had a big sweep of stairs with pillars at the bottom. This was home. We would count and then call coming ready or not.

Sneaky kids would hide nearby so that they could rush in behind you to pat the pillar and say one, two three home. One quickly learned to stay near the pillar and look around. Then rush quickly towards each corner of the house and back to try to flush out any nearby kids. After that, things became more difficult because you move further and further away from home.

The advantage of the two garages lay in the fact that you could lie on the roof and watch. Then, if things were right, jump to tree and ground and charge for home.