Well, back from Bathurst where I watched Clare (youngest) play in her first representative matches as goalie for Eastern Districts 2 in the NSW Women's State League/State Championships.

We drove down Friday west out of Sydney, across the Blue Mountains and then down the Tablelands to Bathurst. Traffic was heavy and I found the road and constant speed limit changes something of a challenge; a little more on that later.

Clare was staying with the team, so dropped her off and then found my motel. This was in the centre of town and pretty convenient. So with a glass of wine, I settled down to read a PhD thesis that I had brought with me. This was huge in size and very detailed, but I quickly became involved because of its sheer interest. I managed to finish it over the weekend, and will certainly write something on it because of its relevance to many of the things that I write about.

Saturday morning the girls first game was against Manning Valley. 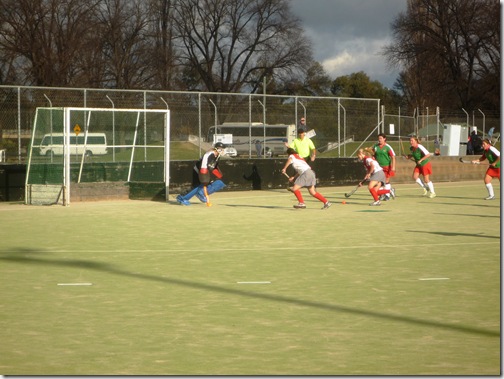 For those who don't know Australia, Manning Valley is the next major valley north of the Hunter on Australia's East Coast; Taree is the major town.

I had wondered how Clare would go as goalie. This was her first rep competition and she was playing well above her normal level.

Clare made two early and spectacular saves, but the pressure kept on coming as Manning Valley pressed home. There is only so much a goalie can do. The final result was ED2 one, Manning Valley three.

The next game was against Orange.

Orange, orange in the photo, were a pretty slick lot. Their field positioning was very good, and they quickly established dominance. The net resul 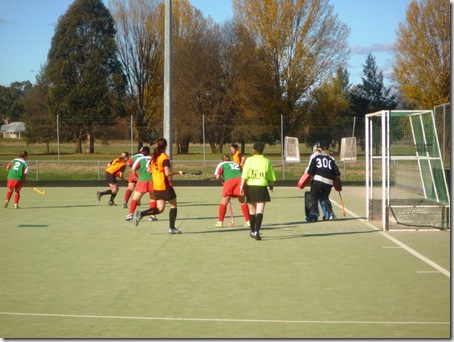 t was a five zero win to Orange.

I wondered about their standard, for it seemed clearly a step above anything I had seen.

Over dinner, some of the parents travelling with the team explained that the State competition involved a relegation system. Orange had been playing in the State League, but had come last in the previous year and had consequently been relegated to the State Championship Division 1.

Not only were they used to playing at a higher standard, but they had something to prove. Prove it they did, coming a clear first. Orange will be back in State League next year! Well done, girls.

Clare's third match was against Campbelltown 2. This was a 1-1 draw.

State Championship Division 1 involved two pools. To calculate positions, goals for and against were totaled. This put Clare's team into a play-off against Grafton on the Monday to determine who would be fifth, who sixth.

Over dinner on the Sunday night I learned more about the organisation of women's hockey in NSW.

Like many women's sports, women's hockey suffers as compared to the men in attracting sponsorship support.

I asked about PA announcements that I had heard at the grounds asking people who were unclear about eligibility for selection for NSW country to talk to the director on duty. This revealed something that I was aware of, but hadn't focused on in a hockey context.

Many country areas have been losing young people seeking work elsewhere. A further problem is created by young who have to leave for study purposes. With one young person in four attending university, and the proportion set to rise, country areas without a local nearby university lose a large slab of their young at a critical hockey playing age.

Another issue that came up over dinner was frost. Because Clare had been playing later in the day, I had not been aware that frost on the ground had forced the rescheduling of games on the Sunday. Now frost is a common feature in Bathurst, and the parents' thought that this should have been taken into account in planning. I had to agree.

As it happened, on the Monday morning the frost was again bad. As a consequence, all games other than the State League itself were cancelled so that the fields were available for the top level. This meant that Grafton and ED2 lost the chance to play their final match, me to watch. Final positions were therefore determined on goal differences, leaving Grafton in fifth spot, ED2 in sixth.

I have to agree that scheduling should take frost into account. Still, the girls enjoyed themselves! The photo shows the ED2 teams, Clare in goalie gear at front. 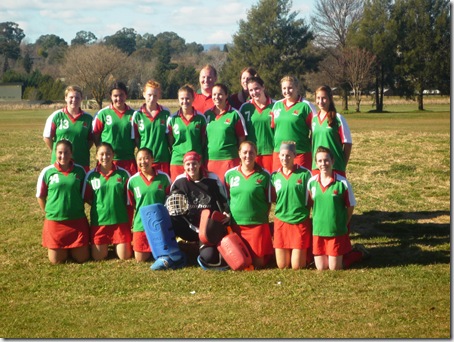 The only plus with the cancelled game was that we could head back to Sydney early before the worst of the long weekend traffic.

I mentioned the road. What a mess. The Great Western Highway across the Blue Mountains follows a narrow strip of flatter land. This is also the strip on which the various picturesque townships' nestle.

The road has become a chaotic scar on the landscape that left me wondering about planning issues.

Will Clare play again? I don't know. At this level, rep opportunities are now limited to the annual event. I think that that's a pity. Clare's team gained in strength and cohesion over the games. This would be much enhanced if there were more opportunities.