As I have mentioned elsewhere, I have started bringing up my biography of my grandfather, David Drummond, on the New England history blog. Written as a PhD thesis over the period from the mid seventies to 1983, the biography covers his life up until the election defeat of 1941.

The biography is the story of a man, of the relationships between he and the area he came to love, of the formation of new political forces and of major changes in public policy. Much of the writing that covers this 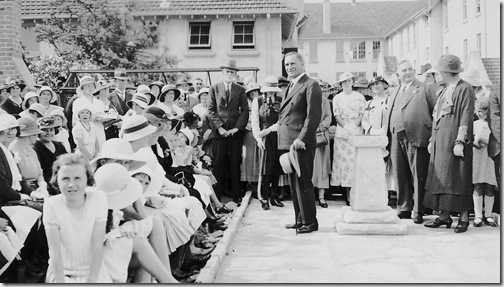 period has been written from an outsider's perspective. This is an insider view.

Since I wrote, we have found many more photos. This one from cousin Jamie's collection shows the opening of Hornsby Girl's High School in 1930. Drummond as NSW Minister for Education stands in the centre.

The first post, Drummond's life chapter 1 - A troubled child: family life 1890-1907, has a focus on the family and his early life. It includes the impact of economic crash on the family, his subsequent experiences as a ward of the state, the onset of the deafness that would trouble him all his life, and also provides an introduction to the history of the NSW child welfare system.

There are elements of the writing that I might change now, but these are really questions of detail. Certainly, the work could do with some tightening. However, I think that it can still stand alone as a piece of writing.

As I post, I will mention the new chapters here, along with a little bit of background to set a context.