Saturday is a big netball day at our place. For those who don't know netball (and here), it is the biggest women's sport in Australia measured by number of players. It really began in England in the 1890's as a "genteel" substitute for basketball and then spread widely throughout the Empire and Commonwealth. It is now one of the few women's games that can make prime time TV. Genteel, however, it is not, or at least not at the top levels.

Helen coaches two University of NSW teams and then plays herself for UNSW. The first game, her ten year old's, begins at 9.05. Then there is a second round beginning around 12.30 that starts with the second team that she coaches, followed by her own match. The games are played at Heffron, a large multipurpose park with some twenty five netball courts around ten minutes away by car from 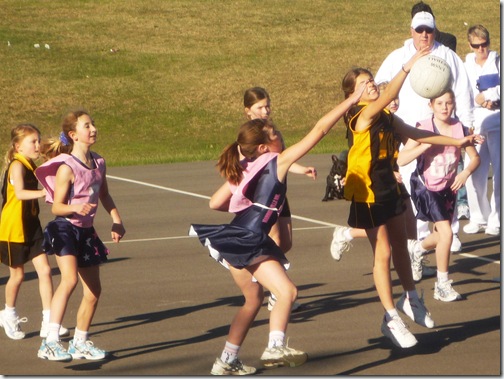 I am not sure just how many people are involved over the whole day, but at any one time there are probably 500 players including reserves, plus the usual gaggle of parents, coaches and other officials. It's actually pretty big stuff.

I usually take Helen to the first match and then stay to watch.

This morning the UNSW team was playing Marrickville All-Stars, a district club that Helen coached for one year. In the photo, UNSW is in the brown and gold.

UNSW were on a real winning streak, finally running out winners 19-1.

As I watched I thought how much the team had come on.

When I watched their first match earlier this year, they were all over the place. Not quite as bad as young kids playing soccer when they all chase the ball in a single clump, something that is quite funny to watch, but still not good. Now they look like netball players. 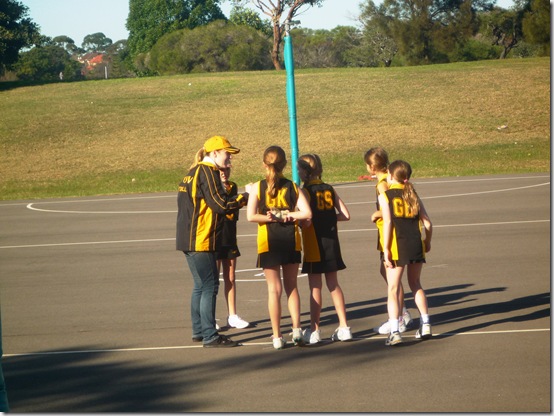 Helen really enjoys coaching and seems to be pretty good at it. You get varying personalities in all teams of all ages, but she manages them all well.

Helen is pretty competitive for herself and the team, but she seems to keep a balance. This morning I listened to the coach on the adjoining court actually yelling at her girls in an effort to try to get them to do better.

Watching the girls develop, I thought how lucky they were to get proper training at a young age. Some of them, one in particular, are really very good and do have the potential for a representative career should they so choose.

Another part of the coach's role can be best described as parent management. 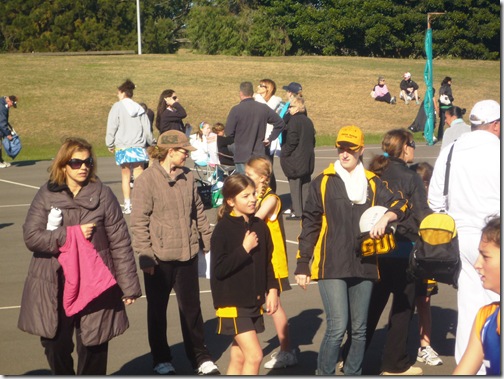 From my observation, Helen's parents seem pretty good. However, that is not always the case.

In all the years I played school sport, I cannot remember my parents coming to watch, although some parents and lots of old boys did come some of the school senior Rugby games I took part in.

How things have changed. Now parents are far more involved in junior sport at school and outside. I am not suggesting that this is a bad thing, just that it has some complications in that some parents become far too involved for their own and their children's good.

There have been some rather nasty cases in Sydney in recent years where parents have ended up abusing officials and other parents to the point of physical violence. Of course this is still a tiny minority, but I do know that I have actually felt embarrassed at some school games at the language used.  One result of this behaviour is that some sports have experienced difficulties in attracting the people they need to keep the sport going.

I was trying to pinpoint in my mind when this change occurred. My impression is that it's actually quite recent, something that dates from the nineties. It would be interesting to see if anyone has actually done some analysis on this.

My parents were sideline to many of my netball games and while mine always ensured I was focused on having fun above all there were others that took it to a different level.

On a side note and I am sure you can relate, they weren't always aware of the score because there was only one person writing it down on a piece of paper.

This is one of the reasons why I decided to develop uScore Netball, an app for your iPhone or iPod.

Netball Melbourne has become one of the biggest women’s sports in Australia. This is very nice information about this sport to have with me. I’m glad that I found your post. Good Luck!

My daughter has recently started playing basketball. Ultimately, there's no point if she doesn't have fun. Was just thinking about the Olympics fall out on my blog and you want to encourage people to do well. But if they don’t do well, you don’t want to totally crush them, and you want to let them know that someone has to lose a match. And you want to be decent to the other side.

I liked your description of your daughter's reaction, LE, http://skepticlawyer.com.au/2012/08/14/going-for-gold-2/