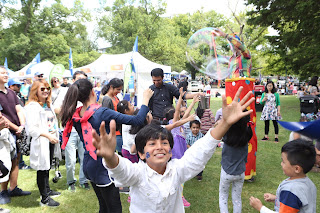 Thursday was Australia Day. It was also India's Republic Day. The photo is one of the many organised Australia Day functions.

I find Australia Day personally confusing. Looking back at the various posts I have written about it, that contusion is reflected in my fluctuating views on the Day.

Australia Day used to be a relatively low key thing, but since the 1980s it has progressively grown into a major nation activity involving all levels of Government. I am distrustful of this type of celebration, I have similar reactions to the resurgence of ANZAC Day, because it so often plays to national jingoism and self-promotion.

I finally came down in favour of the Day because it provides a good excuse for a party and does also celebrate some of the good things about Australia and Australians. 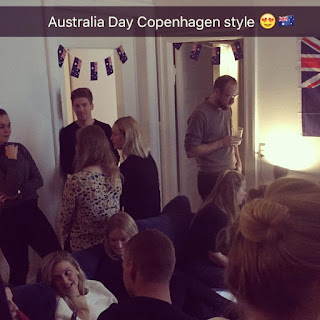 It's also great for Australians overseas, providing an opportunity to get together in various ways. This shot shows an Australia Day party in Copenhagen 2016.

There is, however, an issue with the 26 January date, for it marks the day on which the First Fleet arrived in Port Jackson when Governor Philip raised  the British Flag.

To many Aboriginal and Torres Strait Islander people, this is Invasion Day or or Survival Day. This has resulted in counter demonstrations and celebrations that have come to form an integral part of Australia Day. Many Indigenous people and their supporters in the non-Aboriginal community want the date changed, arguing that a new date would be more representative of the total Australia. They also argue that this would aid reconciliation.

Again, my own views have fluctuated. I can see the argument for, although I also think that a date change might well impede the Aboriginal desire to bring about change by removing a potent symbolic platform. However, it seems clear that the majority of Australians presently do not want the date changed. A poll carried out by McNair for the Guardian suggested that only 15% of Australian in total wanted the date changed. By contrast, 54% of Indigenous respondents wanted a change in date. 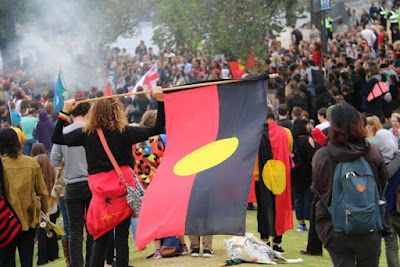 This year there were again the usual protests against Australia Day. However, there was a darker thread this year to the media reporting, to the twitter and facebook threads that made me uncomfortable, a bigotry on both sides of the debate, including the date change question.

It is possible to discuss (and report on) Australia Day, including a possible date change, in a respectful manner seeking information, seeking to understand other peoples' positions. That was absent from some of the headlines and comment threads. In an increasingly fragmented and polarised electorate, Australia Day and especially the date has become another of those symbolic "left-right" issues providing a focal point for division. .

My personal position on the date has shifted from support for a date change (that was itself a shift) to support for the status quo because I think that the current date is important in providing a framework for dialogue and change.

However, I don't really want to play here, to become engaged in partisan discussion. I will go along with whatever the final consensus is. Meantime, I will enjoy the party elements and spectacle of the day.
Posted by Jim Belshaw at 11:30 pm

I don't much go in for the all the fuss, but think it is important to observe a national day. As to the date? Was sitting on the train yesterday and heard a titchy, pouty young thing on her phone saying stridently "NO! I do not celebrate Australia Day". Prepared to bet it didn't stop her taking her day off though.

Have also recently read some comments saying that the national day should be moved from 26 January to 1 March, being the anniversary of the date that the first Australian parliament took control, post colony status. I am not at all sure that this date would be any more acceptable to the indigenous Australians who call Australia Day "Invasion" or "Survival" Day.

Hi GL. I really don't have a view on an alternative date. Whatever date is selected, it's got to be "neutral", not carrying too much baggage. Aboriginal protests may switch to the new date, but it is likely to take some of the focus out of it.

The date (1 March) was wrong. I should know better than to rely on hearsay. But still I wonder what a better date might be? That is not a hypothetical question, I have thought about it. I have come up with no answers.
GL

For me the day is not important, but the celebration of Australia as a nation is. Doesn't mean forgetting, or pretending all problems have gone away for a day, but it should attempt to be as inclusive as possible. Right wing nutters trying to exclude Moslems and weird NSW Greens wanting a 'steal and burn a rag' day are part of the problem. In my view, the majority celebrating its nationhood is part of the solution.

I made the mistake of posting something on Facebook and provoked a massive debate! I don't mind what date it is, as long as we have some kind of day to celebrate Australia. Therefore I said I was happy for it to be changed if that would make Aboriginal people feel better...oops...! The thread was *mostly* respectful, but it did get a little heated at times.