I don't get a lot of comments as compared to, say, The Poll Bludger which can get more than 3,000 comments on a single story. In fact, on this blog I have fewer comments than this in total! Still, at 2,737 comments including my own responses I have quite a memory problem to remember what people said where and when. Pretty obviously, I can't.

The new comments management system overcomes this. Now I can look back. This is especially important with substantive comments, including any responses that I have promised. 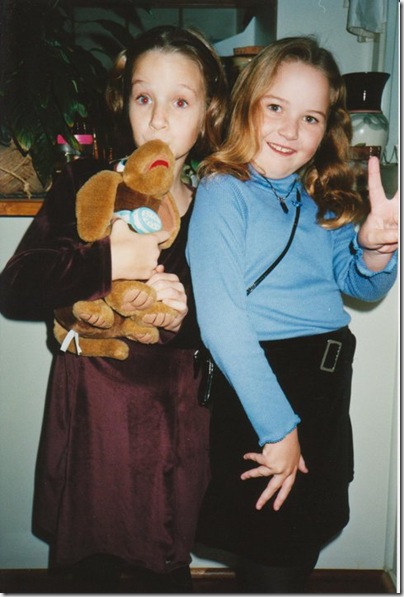 In a comment on  The importance of community activism, Jacqui wrote:

How do we get our youth to become more involved though? Because this is the generation we need to inspire to lobby for personal and social rights.

In responding, I said that I wasn't too worried about this when I looked at my daughters and their friends.

Youngest has just turned 21. For her party, she wanted a gathering of her friends around a musical show theme. Elements of the planning went on for months via Facebook centred on which musical should be allocated to which person.

Those involved had a lot of fun, for the key was to select a musical/character that fitted with perceived personality. This opened lots of possibilities.

Having had some experience, I wondered how many of those accepting would come (this is actually a problem with the modern Australian young: they are more casual about invitations). I also wondered whether people would actually dress to fit their character.

I need not have worried. There were some drop-outs, but most came, while nearly all if not all did dress to fit their allocated part.

Reflecting youngest's personality and range of interests, it was a very mixed group. Old school friends, friends from the Macquarie University Ancient History Society or the University of of NSW Circus Society and others all mixed. There was no trouble, nobody got drunk, people had a good time. 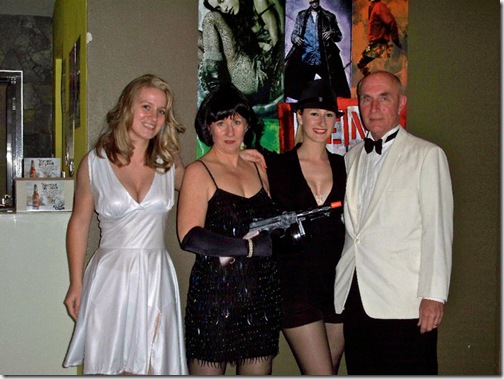 I thought what a nice crowd they were.

The next photo shows the four of us. Youngest, wife, eldest, me.

In allocating roles, youngest took pity on me and allocated me Henry Higgins. This made it very easy. I could get away with a tux!

Friend Catherine  put together the usual slide show based on selected photos showing youngest over time. I found this quite nostalgic and distracting.

The speeches, there were a number, drew out elements of youngest's character: her sense of adventure and lack of fear, leading to frequent visits to hospital emergency departments; her generosity; the way she organised things; and sometimes her sheer eccentricity. As I listened to the speeches and watched the slides, I thought of the way that she had taken a group of girls at school that did not quite fit into conventional groups, that might otherwise have become misfits, and helped turn them into a group that held its own eccentric place, that was a force to be reckoned with.

Both my daughters are strong women who also happen to get on well with each other. Both are involved in a variety of things. This is why I responded to Jacqui's comment in the way that I did.

At some point, I will do a more detailed analysis showing the patterns of engagement and involvement among the young as I know them. For the moment, I am just pleased that my wife and I seem to have done some things right! Really, though, the girls did it themselves.

What lovely picture – but I think instead of ‘enry ‘iggins, you would have been better cast as the Very Model of a Modern Major General who “knows the kings of England, and can quote the fights historical,
from Marathon to Waterloo, in order categorical”

I was reading today a piece by Cynthia Banham, about her ongoing struggles and comforts in the hospital system, and was reminded yet again just how lucky I am with my own daughter. That dreadful air crash which altered Ms Banham’s life claimed the life of my daughter’s close friend and operational alternate in Ausaid; but for rotation of duties my daughter may have been on that flight.

Anyway, they say pride is sinful, but I would think you have every right to be quietly pleased with the job you have done as a parent. And you are right about kids: you can point out some pathways, but they must and will walk them alone; maybe even blaze new ones.

Again I laughed, KVD. I remember you talking about your daughter before. I am always conscious of just how important fate is.