A tweet by Mathew Ingram drew my attention to a fascinating statistic from the Boston Globe: eight of the 10 largest cities in the United States in 1950, including Boston, have since lost at least 20 percent of their population. In the case of Detroit, more than half the city's population has gone ov 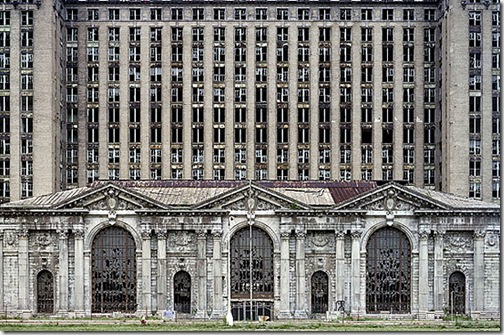 The photo shows Detroit's main train station, opened in 1913 but not used since 1988.

We live in a world in which part is experiencing, rapid population growth, part facing actual population decline. In Belarus for example, the total population has fallen from 10,045,000 in 1999 to 9,500,000 in 2009. This decline is likely to continue. Not only is the population aging, but there is also a growing gender imbalance - there are now 1150 women for every 1,000 men, an imbalance part linked to population aging.

Belarus is not alone. A number of other countries are already experiencing or will soon face population decline.

We live in an urbanised world. Countries like Australia have been urban for many years, other countries like China are urbanising now at a very rapid rate. 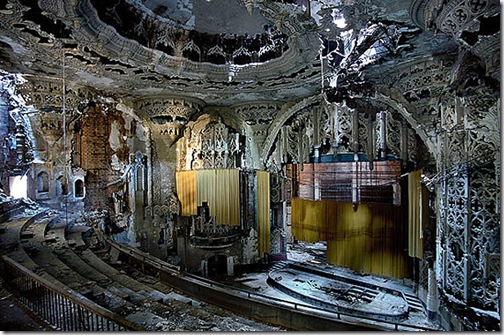 The next photo shows Detroit's spectacular Spanish Gothic United Artists Theater. This was built in 1928, closed in the 1970s

Those of us from regional Australia have experienced population decline at first hand. Schools, stores, banks, civic facilities all close.

Small scale decline can be ignored,especially when the rest of the country is growing. But what do you do when major urban centres, metropolitan cities, go into population decline?

As populations fall, so do rate bases, civic services and urban developments. Vast patches of desolation emerge. It becomes harder to maintain things, not just because costs have to to be spread over smaller populations, but also because large slabs of infrastructure designed for specific populations have to be maintained to meet diminishing needs.

You see, the pattern of decline is not uniform. Some areas 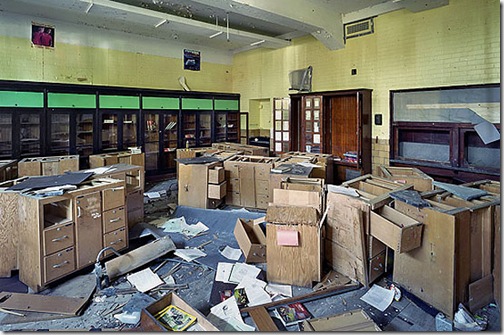 suffer more than others. So some areas are still okay, other's bear costs that cannot be related to population. People fight to maintain areas and services, but ultimately they go.

Now all this may seem a long way from Australia. After all, we are presently worried about the size of the population increase, not issues associated with population decline. Yet we do need to think about it.

For the present, our problems lie not in the overall size of the population, but in its structure and distribution. This, by the way, is not an argument for more decentralisation, although that may be important. Rather, I am trying to tease out a few broader issues.

We have an aging population. This means that we have to invest more in aged care. We have a population in which the number of households is rising faster than the population, reflecting both changing social patterns and underlying demographic trends. So we need to build more housing of one type or another to match this faster growth.

The Australian population is not uniformly distributed. A self-evident statement I know, but I am thinking not just in raw numbers, but of the varying structure of of the population across space. Retirement areas, for example, have very different population structures from outer metropolitan areas. Then there is internal migration, the progressive shifts of population across space and time.

We have already seen examples of the impact of this type of shift. In Canberra, for example, the city's rapid growth required shops and schools in certain areas to meet rapid population growth. Just thirty years later, maturation meant declining needs for those shops and schools. This created significant adjustment problems.

When I look at Australia just at present, I see the Canberra example writ large. If you just crunch numbers for some areas popular with retirees or simply aging because the young are leaving but ignoring future internal migration, the numbers show fast population declines within a not so distant time horizon. In this event, it's not just the aged care facilities that will become redundant, but large slabs of the commercial and civic infrastructure as well.

Just at present, we tend to respond to this type of challenge in two ways. Either, we say the market will work it out or, alternatively, we go all prescriptive. I am not sure that either is very sensible.

When I read the Boston Globe analysis, I think that the think that interested me most was the differential nature of the responses. As part of this, the idea of using contraction as a device to improve overall life style and livability attracted me. I don't know that I have very clear or sensible ideas here. I just found it interesting as an alternative way of thinking.

Hi Jim,
An interesting post.
Indonesia has been trying to control population growth.
Before 1998, the authoritarian regime has been quite successful in promoting family planning program. Afterward the promotion is almost unheard.

That's interesting HN. All the projections for Indonesia that I have seen presently show high population growth for the immediate future. I haven't looked at the way that might affect the distribution of the population taking urbanisation into account.