Time Team & the joy of archaeology

The ABC is presently running the British Time Team show every night at 6pm.

I began watching by accident. We normally watch SBS News at 6.30 and I rarely watch TV before that. However, one night I was on my own, cooking, and so switched Time Team on for background noise. 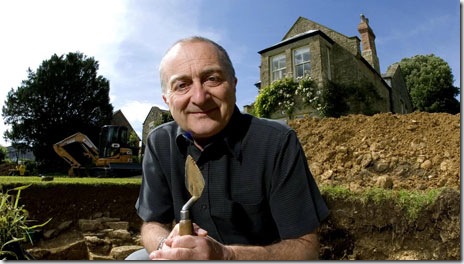 My first reaction was negative. I thought that the program might be actually dangerous in encouraging people to go out and dig up the countryside. Then I became fascinated and finally addicted.

The basic concept is simple enough. Start with an archaeological/historical problem such as a story that there was once a roman house or a castle at a place. The team then has three days to resolve the problem using the latest archeological techniques.

It was the three days constraint that initially made me feel that the show might be dangerous, risking sloppy work. However, I then became fascinated in the techniques and unfolding stories, aided by the almost breathless enthusiasm of both the presenter Tony Robinson and the professional team.

Human occupation of Britain has a long history. Further, the phases in that occupation lap and overlap across the landscape. All this means that you can never be sure just what you might find. -

The program must have been very expensive to produce. The resources, people and technical, available to the team would make the normal archaeologist drool. The three day constraint is obviously artificial, but it is important in creating suspense. Will  the team solve their problem in the time?

The team also uses multimedia very well to present evolving pictures. This is what we thought the building looked like, this is what it actually looks like.

For me, one of the most interesting aspects lies in the background history whether it be the fall of Rome, warfare on the Welsh Marches or a the industrial evolution and a railway construction site.

My knowledge of British history adds to my enjoyment, but you don't need to know this to enjoy the program.

I really do recommend the program. The British web site provides a lot more information about it.

I even watched it when I was in hospital; it was on The History Channel. This has been compulsory viewing for me too over the past few weeks, and indeed past few years!

Along with Australia's Got Talent. ;)

I fear that Australia's Got Talent hasn't grabbed me, Neil! Givem your interests, it's not surprising that Time Team grabbed you as well. It's actually nice watching something at the moment that generally has no current overlays.

I agree that is a terrific program, Jim - but also that pic you used is great as well, with the trowel in the foreground, ditch digger in background. Also I love the earnestness of the various 'characters'; makes for great viewing.

I particularly like the ones chasing up the siting of old Roman roads. What an industrious people they were.

kvd
ps reminds me of a certain Greek odessey I was reading...

I assume that by industrious people you meannthe Romans, KVD!

You have picked up the elements in the shot very well. But it was that ditch digger that helped make me uncomfortable. I learned my archaeology in Australia; that type of equipment would have destroyed the top layers.

That steam shovel gave me pause for thought at first; but I came to the vague conclusion that the experts must have known what they were doing. Also, it is interesting to see just how much overburden? stacks up in sometimes just a few hundred years.

What I means is, in Aus we see pictures of our continent being blown out to sea in duststorms; but in England (and Egypt, Greece) they always seem to have to dig down a few feet??

I think that's right, KVD. In Australia we do get sites where geogprahic change has effectively buried deposits. But in England, later occupation has buried earlier deposits.

Mind you, that can happen in drier climates. Look at the middle east. It comes back to the intensity of human occupation at a particular spot.

I love Time Team too. I wanted to be an archaeologist when I was a kid, so not surprising.

One thing that I did find, LE, was a reaction to digging in the wet and cold. All my archaeology was in Northern NSW. I don't know that I could manage the UK!

I am such an absent academic that I think I would probably freeze to death on the field just to find a neolithic bit of pottery...perhaps it's best that I took up law instead!!! Or maybe I could have taken up Egyptology. I went to Egypt when I was a teenager, and it's the only place where my asthma ever disappeared (so hot and dry!)

One thing about archeology, LE, is that you don't have to give it up entirely. So Eygpt might still beckon - introduce the kids to it!