Last Friday, 21 September, a friend and I went to see the new Bruce Beresford film Ladies in Black. I had really wanted to see it. 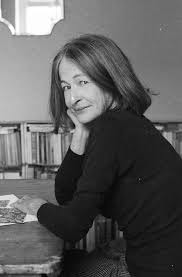 The film is based on the 1993 book Women in Black written by Australian writer Madeleine St John (pronounced Sinjun). Madeleine was born at Castlecrag on Sydney's North Shore on 12 November 1941, the daughter of Edward St John and French mother, Sylvette (Cargher). Her maternal grandparents were Romanian Jews.

Edward was a prominent Sydney barrister, a civil activist and a sometimes renegade Liberal Party parliamentarian in the 1960s. Madeleine's mother committed suicide in 1954 when Madeleaine was 12. The following year her father married Valerie Winslow.

Madeleine grew up in the urbane upper middle class world on Sydney's North Shore. She went to Queenwood School for Girls, Mosman before going the Sydney University where she was a contemporary of Beresford, John Bell, Clive James, Germaine Greer, Arthur Dignam, Robert Hughes and Richard Walsh. Her father defended Walsh in the first Oz obscenity trial in 1964.

Madeleine turned to novel writing quite late following a failed eight year attempt to write a biography of Helena Blavatsky. She then gave up, destroyed the manuscript and tuned to fiction. 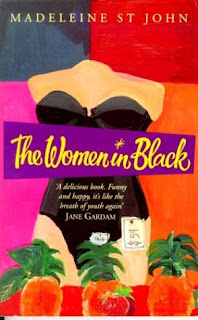 Women in Black was published in 1993 followed by three more books including The Essence of the Thing, a book shortlisted for the Booker prize. Her career was cut short because of her death from emphysema. She was just 64.

I am very out of touch with some things. I had not heard of the book, nor that it had been turned into a successful musical under the title Ladies in Black. I was attracted to the film by the posters and by snippets of news that suggested that it was a film that I might enjoy. As I did.

The film is set in Sydney in the summer of 1959. This was a time of change in Australia. The austerity of the immediate post war period had been replaced by relative affluence with full employment and growing wealth. The mass migration program launched at the end of the Second World war was well underway bringing changes within Australian society,

The story begins when a shy schoolgirl, Lisa Miles (Angourie Rice)) takes a summer job at the grand city department store, Goode’s, while awaiting the results of her final exams. Goode's is clearly based on David Jones, then Sydney's poshest store, where Madeleine worked as a casual. 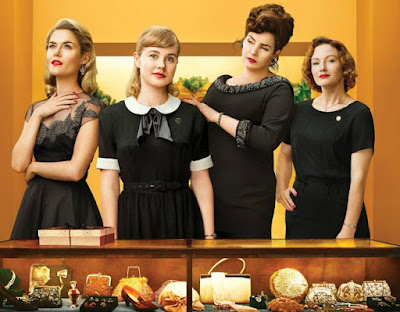 At Goode's Lisa is befriended by fellow assistants in the cocktail frock section Fay (Rachel Taylor) and Patty (Alison McGirr) and is drawn into the ambit of Magda Szombatheli (Julia Ormond), the charming and sophisticated Slovenian émigré who in charge of Goode's high fashion end. Between them, they are the ladies in black named because of the uniform they wear.

We watch Lisa grow from a bookish girl to a glamorous and positive young woman as she herself becomes a catalyst for a cultural change in everyone’s lives.

I really enjoyed the movie as did our fellow blogger AC. You will find her review here. It does have weaknesses, but it's good fun.

Following the movie I read some of the reviews as well as investigating the film's background. I am glad that I did this after rather than before, because I got seriously annoyed at spots. Sometimes, it is better not to read reviews because of the way it affects, conditions, thinking. I may come back to this point later once the film is out of the cinemas.

Thank you for the link

Hi AC. I knew that you had not been well but did not know the cancer had come back. The film would be therapy. I was glad that you liked it

I'm afraid that for me LiB didn't live up to expectations. I've since looked at reviews and basically agree with the one from Variety. I'd say the script is the problem - I suspect because Milliken and Beresford were too loyal to the book. It was all just a bit too clunky and a bit flat. And I am totally over Shane Jacobson whose alleged charm eludes me. Lazy casting: if Bill Hunter was still alive and a bit younger we would probably have had him (ie, that would have been similarly lazy casting).

Shane Jacobson is in LIB? Where could he fit within the story arc? Don't tell me :)

Unfortunately I won't see this fillum until it hits Foxtel, so will have to withhold judgement, but the thought of SJ in Ladies in Black is pretty boggling.

(Comment is made from clear memories of annual DJ's visits following "mother" around :)

ps if they made a film about the Archie packers prize, well he'd fit right in imo. And could actually be a good movie, that...

I laughed on your comment on SJ - and BH, marcellous. Too much typecasting. As I may have said, I thought that this was one movie which would have been better if ten minutes longer to add depth