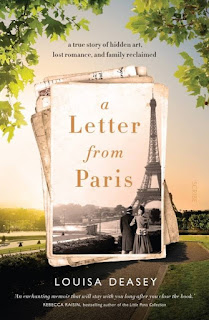 My internet connection has been down, system outage, which proved a complete pain! Forcibly removed from my screen, I was sitting there in the battered armchair in the kitchen reading with the radio on in the background. Then a most wonderful interview on ABC Radio National's Conversations came on with writer Louisa Deasey about her new book A Letter from Paris. I put the book down and listened, tearing up at several spots.

The ABC RN web page describes the story in this way:


In 2016 Louisa Deasey received a message, out of the blue, from a stranger in France.

The woman's grandmother had died, and in her attic was a bundle of love letters.

They told the story of a dashing Australian man named Denison Deasey, and his love story with a young French girl.

Denison was Louisa’s late father, and when she was growing up, the family rarely spoke about him.

The message from France sent Louisa on a voyage of discovery about her father, and herself.

These fairly bland words only hint at the texture of the story. I am not going to tell you more about the story. Instead, this is the link to the Radio National conversation, this a link to another description that includes a chapter from the book. I leave it to you to follow up.

Think about the conversation, I thought that things that inspire might be a suitable topic for this week's Monday Forum. What thing's have inspired you? They might be a book or film, a scene, a person. Whatever.

As always, feel free to wander as you like.
Posted by Jim Belshaw at 11:30 pm

Sorry Jim - I'm way to old at this point to "be inspired".

When you put up a discussion post about things which annoy the living Chr*st out of you, or are just too blatantly self-serving, I may contribute :)

But on a more positive note, and in a(nother) blatant attempt to derail this fine topic: I have occasionally watched proceedings of parliament, and the interminable 'divisions' called on things of little consequence - and wondered why this party lines voting nonsense wouldn't better serve us - we the people - if all voting was done by secret ballot?

Seems to me the present system is a blot upon our democratic process and, if it was thought effective in breaking the hold of the unions, why not apply secret ballot to parliament?

Voting by means of a small box with hidden yes or no buttons could be private, and almost instantaneous, and would allow each venerable member to express his/her true opinion without reference to 'party lines' - no?

You poor old chap, kvd! :) I find the occasional inspiration as a useful balance for things that annoy the bejesus out of me!

I quite like the division process. I would not support secret ballots in Parliament because I want to know how members voted. This is an area where I very much like transparency.

I'm surprised you haven't commented on bullying and female members!

And I, in turn, am genuinely surprised by your non-appreciation of secret ballots, young Jim :)

In a 'democracy' where 98% of voting is done on party lines, one wonders why they (the party with the numbers) don't just wheel out whatever they wish on any day, and have it be recorded in the affirmative? Divisions are just theatre, surely?

Bullying and female members? The women I respect are way beyond that nonsense. What the complainers are actually complaining about is the fear of losing their cushy jobs, doing important work like divisions and such. If I ran the show they'd (the complainers) be in charge of the tea and sandwiches, nothing more :)

See, I think 'the system' as it stands is just wasteful of the few really talented people (from all sides) who are obliged to hold their nose and vote on party lines. There's differences of opinion, fine, but the problem is we have lost 'country first' to the political necessity of 'party first', and that's a great shame.

Penny Wong, Warren Mundine, Anthony Albanese, Brigit McKenzie, Christian Porter, Frydenberg and, even tho' I hate the accent, Mathias Cormann (your list will be different to mine, I accept) are people of demonstrated substance who I'd be happy to have running this shambles.

As opposed to Christopher Pine (for instance, but in particular) to whom I would not feed 3 day old kitchen scraps :)

I suspect kvd has a point, although I would not trust a secret voting process in the hands of either major party. They'd potentially secretly track who voted what (in the national interest of course), possibly change the outcome of the vote, especially in these days of razor thin margins and/or minority Governments etc. Call me paranoid, but...

On inspiration, winter irises, king parrots, grass parrots and rosellas, with the occasional raucous flock of sulphur crested cockatoos, all in my front garden right now, with a new heavy bloom of wattle overhead.

You're paraniod, but I agree with your inspirations :)

In the same vein, my chookhouse has now become the maternity ward for a possum and her newborn. Staff love it, and eggs have only reduced to 3 from the normal 4. And then there's the bloody wombat who has dug his burrow some (I've measured it) 12 feet under my carpark entrance. If it ever rains, my clients will be very annoyed by the subsidence.

Clivias blooming now, King Parrots, bloody sulphurs - all the important things in life :) Politics, not so much.

Actually, if I desist from being my normal cynical self, I have actually read/watched two things recently which I'd say were inspiring:

- both a long read/watch - but worth it, for the smile on your face, and hope for the future.

First smile of my new day: an article on beef-only diet. Well written, and quite even-handed - with the author's tagline noted as: