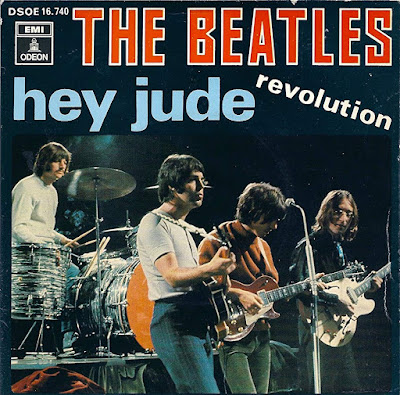 In a comment on last week's Monday Forum, kvd referred me to Tim de Lisle's essay in the Guardian, Nana na naaa! How Hey Jude became our favourite Beatles song. It's a well written piece that attracted a large comment stream, 1548 as I write. Some agreed, many others did not listing their favourite Beatle songs in order. Some attacked the Beatles, including a few lone defenders of classical music!

I do remember Hey Jude coming out, but not really the exact year. Looking it up, it was 1968, roughly when I thought.

One of the difficulties of growing older is that dates tend to blur, along with the detail of events. I am not talking about the aging process as such, although that can happen. It's rather that the present is always more intense, an intensity lost as that present recedes further into the past. The more presents there have been, the lower the intensity of preceding presents, the more memory is lost. Certain things stand out like increasingly distant mountains, but the detail and often accuracy is gone.

This process is a good thing. How can people heal from tragedy or trauma if the details remain fixed in their memory carrying the same emotional intensity? We need distance to put things in perspective. We need new experiences with new emotions. Healing may not be perfect, scars may remain, but the process allows us to move forward.

I am reminded of all this from time to time because I write so much history, including stories from the relatively recent past. My last Armidale Express column began:


Life can sometimes become too much. On November 18, 1920, William Ogilvie was found lying on his bed at Sydney’s Usher’s Hotel with a bullet wound in his temple, a revolver clasped in his right hand. He was only 58.

Near his body were found a letter to his solicitor and telegrams to his wife and children.

“Good-bye, my darling wife,” one telegram read, “I shall never see you alive again. I have written you to Ilparran today, explaining everything. Fondest love, my dearest dear.”

I felt sad reading the material on his death because here was a man with a loving family, without money worries, for whom it had become just all too much. Yes, he appears to have been drinking too much, this is often a feature in such cases, but this is not a sufficient explanation. Knowing something about he and his broader family, I can surmise far more than I could put in 500 words.

I think it goes back to the decision to send him away to school in England at an early age, separating him from home including his grandmother for whom he seems to have been a favourite. Then after those years in England came his father's decision after William completed Oxford to send him back to Australia to start preparing to take over Yulgilbar. William seems to have been happy in England and close to his brother who was also living there.

Relationships with fathers are often complex, Edward Ogilvie was becoming increasingly irascible and authoritarian. His daughters, poet Robert Browning's beloved octet, would shortly escape into marriage. His brother would remain in England. For William's part, he was sent back to a country he now barely knew to learn his trade from a station manger who continued to live in the big house, who excluded him. When William raised objections and concerns with his father about the way the manager was treating family interests, he was ignored.

Later, his father would be forced to take action, to put aside his extended idyll in Europe and especially Florence, a city Edward had fallen in love with, to return to stabilise the family fortunes. By then, the break between William and his father had become permanent. Now well-off in his own right, it seems that William was left without a proper anchor or degree of purpose.

All this is surmise. although (I think) reasonable surmise. What I had not expected is that the column would draw comments from people whose own fathers had committed suicide, where the wounds were still raw. That past was still very present.

While the passage of time does lead to sometimes necessary blurring, there are times when you would like to remember. Hey Jude is a case in point, That period of my life once so bright, so clearly delineated in bright light, has become vague. But this is where the historian comes in!

Following kvd's comment, I went back checking dates. I find that if I remember something to which I can attach a date, it becomes easier to remember and check events and feelings surrounding that. It was something of a trip down nostalgia lane, Maybe I will write something on that. But not today!