I was up country last week. As I topped the mountain, the southern New England was showing traces of green, but the country then got very dry indeed. All the verges along Thunderbolt's Way showed signs of grazing from travelling stock, although this time there were no stock on the road either coming or going.

I kept a wary eye out for roos, there have been a number of accidents with hungry roos crossing roads looking for grazing. but while I saw some roadkill there were no live ones. Just as well. I was a little tired driving in both directions and it was also raining for a lot of the time. Not enough to break the drought, but it should give some greenpick if the frosts hold off.

I was thinking as I drove about the droughts I have known. The grass gets a gray colour, almost transparent.Then there is the blowing dust coming in especially from the west. This drought has attracted a lot of mainstream media attention, that's good, but its not the worst drought I have seen.

Armidale was cold and damp. It's a pretty place, really quite beautiful in spots even at the end of winter, but I was glad to spend some time in my warm motel room, just reading. I had planned to go the week before, but the city was booked out. Last week, too, accommodation was quite limited with most of the motels showing no vacancy signs. In addition to the hotels and motels, Armidale now has 133 Airbnb places. Most of these were booked as well.

Armidale is a funny accommodation marketplace because of its peaks. There is normally plenty of accommodation, but then you have graduation or some other special event that soaks it all up. From the viewpoint of the provider, it's feast or famine.

I have the strong impression that both base load and peak demand has increased. This is where Airbnb has its advantages, for it has effectively double available bed nights. 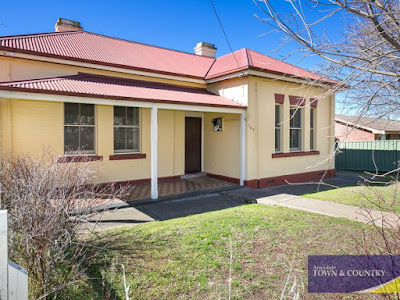 In February I saw a small heritage cottage listed for sale at $275,000. It was a funny little three bedroom place, then rented for $275 per week. It was proving hard to sell even though that's a good rental yield by Sydney standards because it didn't quite fit the family market. Checking, it finally seems to have sold for $250,000. It's now on Airbnb at $200 per night and seems to be renting quite well.

Looking at the photos, I estimate that the new owners probably spent $50,000 on a new kitchen and other repairs. Even at an average of just two nights per week, and occupancy seems far higher than this, $400 per week is not a bad gross yield.

There is also a ripple effect. Armidale, for example, does have a certain draw-power. Airbnb adds to Armidale's options but also spreads its effects around Armidale, creating new choices.

I mentioned that I spent a fair bit of time reading. I had one of those green shopping bags with me full of new, well mainly new to me, second hand books. Yes, I know that I am meant to be clearing out my collection and it has shrunk a little, but there have been some opportunities to buy some really good stuff cheaply . As you might expect, my new treasures include history and biography with an especial focus on Northern NSW, my broader New England.

I read very little current fiction. It's partly time, but it's also true that I am put off by the now many writers' festivals. I don't attend, but I hear a fair bit about them including multiple festival sessions repeated on ABC Radio National. Maybe I'm just getting old, but as the festivals search for audience they go more and more into particular types of niche areas that target elements in the audience that do go. And I'm not interested.

I have the same reaction to ABC Radio National's Hub on Books. I have never been very keen on arts or cultural programs. I tell myself I should be, but then I find myself turning the radio or TV off, retreating into silence and my own thoughts. There is so much produced now, so little that I am interested in, that I find myself submerged. I can't process it all. I am out of their frames. I am also tired of angst.

The things that I am most interested in, the stories that I want to tell, relate to my own life and, more importantly, my own area. 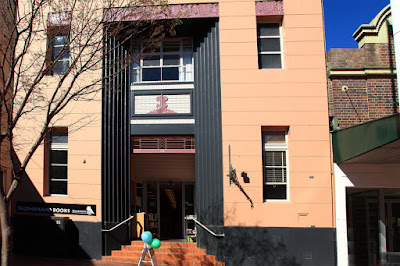 On Wednesday I visited Boobooks (on Facebook) and the Readers Companion (on Facebook). These two nearby stores in the Armidale Mall really compliment each other.

Boobooks has taken over the artdeco banking chambers built for the Commonwealth Bank. Now the bank that I knew as a child is the home to 70,000 second hand books. Happiness.

Reader's Companion is a new book shop. It's not easy making money today from a bookshop. Reader's Companion has responded by making the store a centre for new releases and writer activities, including the ever-increasing range of local publications. They also have a Kombi van that takes new books to all the surroundinf centres that lack bookshops.

I sat in the coffee shop across the Mall from Boobooks to review my latest treasures. It was just too cold to sit outside as I normally do,

From Boobooks, I had a signed copy of Zeny Giles' Caught in the Light: A Celebration of Newcastle.  I hadn't heard of Zeny, so many people I haven't heard of!, but she is quite a well known writer.The book was published by Newcastle's Catchfire Press, another small publisher that I did not know.

From Reader's Companion, I bought Jimmy Barnes' Working Class Man, the second volume in his autobiography. Now I here I found myself caught in cross-links between recent purchases.

Jimmy Barnes' first chapter is headed I was a serial runner and is subtitled  On the way to Armidale, 1974. The first 32 pages are a picture of hippy Armidale in the mid 1970s.

I have previously mentioned the New England writer Shirley Walker. Recently. I was able to buy her memoir, Roundabout at Bangalow: an intimate chronicle which includes details of her life on the North Coast and in Armidale. It was Shirley's son, singer and song writer Don Walker, who brought Jimmy Barnes to Armidale when Don decided to do postgraduate studies at the University of New England.

The hippy connection linked to another of my recent purchases, Judy Cassab's Diaries. I first read the diaries because I was interested in Judy Cassab as a painter. There I found that son John had become involved in the counter-culture movement on the North Coast in its early days, so the diaries include references directly relevant to my historical interests. Here the social change that took place in the 1960s and 1970s is part of my story, personal as well as historical.

The copy of the diaries  I was reading belonged to a friend. It's only in the last four week's that I have been able to acquire my own copy.