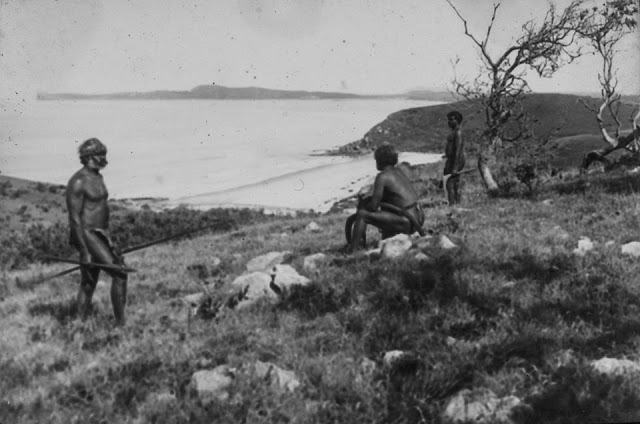 "I first became interested in the idea of culture and cultural change in studying prehistory.

Here culture was defined in simple terms as nurture, not nature, all the things that were learned. Necessarily in pre-history, this had a material focus, but anthropological and sociological studies dealt with culture in a broader sense, including interactions between individuals and societies.

During this period I came in contact with what is now called mirroring, the way in which individuals or minority groups (in this case the Australian Aborigines) could come to reflect or mirror the attitudes held about them in the broader society.

You can see this today in the way I approach Aboriginal policy issues - I argue (among other things) that our focus on Aboriginal disadvantage and failures not only stigmatises Aboriginal and Torres Strait Islanders in the broader community, but feeds back into attitudes and perceptions within the Aboriginal community". Belshaw, 23 May 2010

This post follows from We create the things we most fear - reflections on 13 years of blogging 1.

In all the areas that I write about, the one that I have found most difficult, the one where I have lost most joy, is the history of, and policy relating to, Australia's Aboriginal peoples. I find it all just so complicated, complications that have continued to increase since I wrote the above in 2010.

Back on 20 December 2006 I wrote Australia's Aborigines - an introductory post. It was, I suppose, something of a manifesto. Over the thirteen years since I have written 146 posts here, more elsewhere. I have also given one major seminar paper on New England's Aboriginal languages. I really have no idea of the total word length. I guess that it would be well over 200,000 words in all.

During the four and a bit years I worked with AHO I met many hundreds of Aboriginal people, I attended community meetings, meetings with Aboriginal housing groups. I saw Aboriginal politics and policy making at first hand. I did not change my basic views, but those views were tempered by a better understanding of prejudice and disadvantage.

I respect the right of Aboriginal and Torres Strait Islanders to express views about their own communities. This may sound trite, even condescending. Surely it is self-evident that the rights of any group to make comments about their community should be respected? Well yes, but in the Aboriginal cases it goes to something more important, the right of self determination.

Here I am always conscious of the words of my Aboriginal mentee. We had been at a combined session of mentors and mentees and had gathered outside for a fag. "We know our culture must change", Jenny told the assembled group, "but we want to control that change." I accept that viewpoint. I also accept the right of Aboriginal people to point to and highlight the ills of the past. I may disagree on historical fact, but we are dealing with feelings and emotions that must be respected. This bears upon something that I argued for many years  ago, the need for a new compact with our Aboriginal peoples.

Reflecting on my historical research over the colonial and post-colonial periods, I have often found myself shaking my head .and saying you could not think that. I am not talking about race, although racial prejudice has been and remains a factor. Rather, I am thinking of those who for the best of reasons wanted to "do something to help" our Aboriginal peoples. Bluntly, the Aborigines would have been better off if none of those things had occurred, if there had been no Aboriginal specific policies at all.

Paternalism, the desire to do good for others, the belief that officials and social reformers knew best, had quite devastating effects. This remains a factor today. The Intervention is an example. I wrote a fair bit on this at the time. I was prepared to suspend judgement. Now, with the passage of time, I'm hard pressed to identify a single positive that might justify the expense or the disruption of people's lives. It's just another failure in a long line of policy failures.

I mentioned mirroring in my introductory quote. I came across this in an article in Oceania in the 1960s, I no longer have the reference, looking at the way that prejudices and stereotypes about Aboriginal people affected the views of those people about themselves. I think that it's an important concept that I have carried with me over the years.

The effects of mirroring combined with paternalism and prejudice have been quite profound. They largely destroyed Aboriginal agency, the affected culture, they created structures and policiesthat were bound to fail. In recent years, their effects have been compounded by "white" guilt which is, in its own way,quite as destructive and paternalistic as its predecessors.

I have been deliberately provocative here to make a simple point. If, as I believe. Aboriginal people have to determine their own future, then they should be allowed to do so. The question of how the broader community responds is a separate question.

My personal view is that we require a treaty to move forward. The creation of that treaty will be a messy process since neither side presently has a common position. Still, I believe that it can be done. I also think that it needs to be done to allow us to put the past aside.

We fall down badly on both life expectancy and proportion of National expenditure.

As to a treaty? I'm more inclined to the approach of the USA, where there have been hundreds ratified over the years - with specific intent as to locality and needs.

Totally off topic: 10,000 years ago the population of Australia was the 4th largest in the world, behind Mexico, Brazil and Russia. And followed by Peru, United States and China:

On a treaty, which is the end point of this post, I'm thinking that any national single treaty would seem to me to be, at best, symbolic only. As such, it will be marred by platitude, and will certainly fail to address any specific needs/recognitions of individual group populations.

Population numbers were interesting. Didn't check the original source. Mind you, I don't believe them. 10,000 years ago Sahul was just coming out of the Late glacial maximum which seems to have demolished populations.

The comparative numbers were interesting. I think there are Canadian treaties with particular groups. I will try to find a lonk for you. There were also various British treaties with the Indians. Indeed, one of the causes of the American revolution lay in the desire to access Indian territories protected by treaty. Treaties have to be respected. The US record is not good here.

I agree with you on the local point. That has to be managed in some way.

I think with NZ. the point about the treaty is that it has made it easier to form common views. I suppose the haka is the best example.

Been driving me crazy for a couple of days, but I'm almost sure "Thomas Dick" was in fact George Henry Thomas Dick, and I believe one of his offspring was Harold George Dick - who was mentioned by me in reference to one of my clients (who is his son) back on your blog in comments to this post:

- in relation to commemoration of a wartime air disaster in Queensland.

Breathes a sigh of relief :)

That was interesting, kvd. I checked the links but did not follow the whole thing through. I should do that!

Are you advocating some sort of apartheid? It seems that way. certainy 'self determination' means living separately and doing their own things with own laws etc... That could be called "apartheid".
I am not saying that is not the right way to go but just find it interesting that if this is what you avert to then why not say it.
I have been in Oz for only a few months but I can see what you say about these so called Aboriginal rights groups etc... They just ferment grievance. If they ever come up with a proper solution then they would be out of wok wouldn't they. I also had a thought the other day. How can there be such a thing as an unemployed aboriginal australian? there is (seemingly) some kind of positive discrimination going on (not something I agree with but hey it happens right?). Also there are so many asians (and pretty much from all over the whole planet) working here it seems incredible that so many jobs can be given to non Australians. Especially - if you listen to the Aboriginal groups - if there are so many disadvantaged and unemployed Aboriginals. It seems crazy.There must be some simple explanations to this (despite it being seemingly very complex, these things never are when you dig a little)

Hi anon. No I don't support some sort of apartheid. I accept that self determination can be a slippery concept. However, at the centre is the removal of the paternalism that has and to a degree still does dominate thinking.

One of the practical difficulties in determining new approaches, in remedying past ills, lies in the diversity of the Aboriginal and Torres Strait Islander peoples. Traditional society was location specific and was then subject to a rolling wave of European settlement that disrupted traditional life in different ways at different times that varied between jurisdictions. Concepts like tribes and indeed the idea of the Aborigines themselves did not exist but came out of European occupation and interaction between local populations and the new arrivals. I speak of Aboriginal peoples in plural to reflect this diversity. I also rarely comment, the intervention is an exception, on current issues outside NSW.

Given the diversity, and this fits with my ideas on self-determination, I think that it is up to Aboriginal peoples themselves to define their approach to issues such as treaties. Again, this raises a range of issues.

I don't know what you mean about Aboriginal unemployment. While this varies across the country and between groups, it is on average higher than among non-Aboriginal groups. There are particular reasons for this that includes location (many Aboriginal people live in country areas where unemployment is high in a general sense), industrial restructuring that has removed manufacturing and rural jobs and long lags in education. In 1965, there were just two university graduates with very few completing secondary education. The position today is very different. This has fed into Aboriginal employment opportunities, if with a lag. But unemployment remains a real problem.