COVID 19 Conundrums and failures in communications - a regional perspective 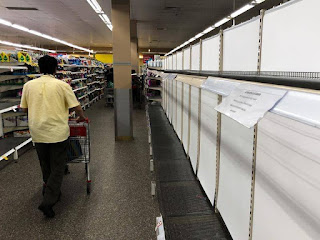 Sitting here in Armidale I have felt relatively isolated from the Corona virus scare. It's not as though I felt that Armidale would be isolated from the outbreak, although its distance from the metro centres does provide a measure of protection notwithstanding the university and boarding school, the volume of traffic in and out of the city. Rather, I simply didn't join in the panic fueled in part by media coverage and earnest politicians.

I am of an age now where I fit into the highest risk category. Despite that, I felt that the probabilities of catching the virus were still relatively low, while if I did catch it I had a 94% chance of surviving the experience. I am also fairly fatalistic. Beyond taking sensible precautions, I didn't think that there was much I had control over. I also didn't want to destroy my life style, including driving into town (at the moment, the statistical probabilities of being hurt there are higher than my risks of catching the virus) to shop or go to meetings. 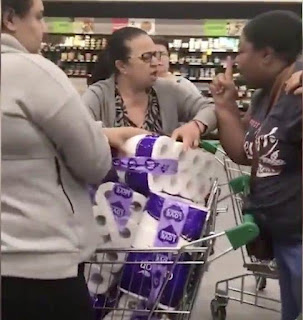 Given my views, I watched the Great Australian Toilet Roll rush with a degree of bemusement. This emptied the shelves in Australia's supermarkets.

Why toilet paper? It's a product actually produced in Australia. Further, unlike long life foodstuff (another item being stripped from shelves), there are alternatives. I'm not sure that I especially want to go back to  newspaper, this was still around in some country loos when I was a young child; it's very uncomfortable, but there are other alternatives.

My attitude in all this was dinted a bit when I went into an Armidale supermarket and found the toilet paper shelves stripped. Surely, I thought. Armidale people are more sensible than this? I then suddenly realised that the local social media feeds were full of concerns and fears.

I could see the point in the discussion. At a technical medical level, the Australian response has been good. We have a world class health service and our civil institutions are still generally competent. But looking at the various comments I could see that people were concerned about inconsistent messaging, lack of information and a growing feeling of a rolling crisis that left them not knowing what to do. fearful for themselves and their families. The end result is extreme concern flowing into not very sensible responses and reactions.

At a purely local level and regional level, there is a problem too in that the coverage is very metro and state based. You can find out what is happening in Tasmania. it's a state, or in Sydney, its a metro, but Northern NSW is a blank within which rumor flourishes.

As mentioned, rumour steps into this blank. Hunter New England Health has reportedly tested 2,000 people for COVID 19. Why haven't we heard anything about the results? Are they covering something up? London to a brick, the answer is no, but people worry.

Apart from inconsistent messages, the feeling of a rolling crisis is accentuated by the way that ministers keep on jumping ahead of themselves, This is a rolling staged crisis. In focusing so much on what might be done when things get worse, State and Federal Ministers (and the media) are adding to the sense of doom, placing people in the position where they are effectively making decisions on a what-if.

With the growing sense of crisis, people are rushing to get COVID 19 tests whether they need them or not. This has overloaded the health system, leading to official calls to people to exercise restraint, to suggestions that doctors should triage patients to focus on defined high risks categories.

That's fine, but an unwell friend who reported sick was told by her employer that she could not come back to work until she had done a COVID 19 test. She met none of the criteria specified for required testing beyond cold and flue symptoms, You can see the employer's point of view, and in this case working from home is a possibility, but it adds to strain on the health system.

So far there are no COVID 19 cases in Armidale or within a 250 mile radius. There is no point in being tested unless you have travelled or have met someone who has travelled in circumstances where they might have come in contact with the virus. Beyond simple sensible precautions such as hand washing, there is no need to alter your life style.

I am running a history course through U3A with 45 internal students of whom an average of 35 attend each lecture, all in the older higher risk age range. Obviously I have thought about my group, about the implications of COVID 19. If COVID 19 reaches Armidale, we will have to suspend classes. Meantime, it's full steam ahead.

Of the many memes going round is this response to the advice that we should avoid touching our faces: 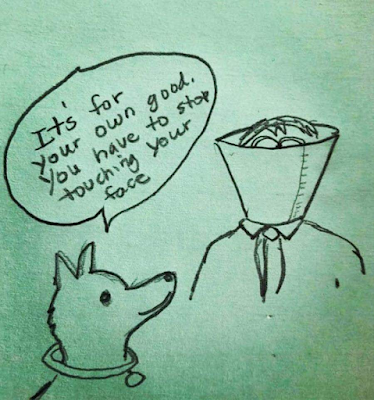 First case in Canberra announced. I wish him well, as I wish all of us well, but forgive me for suggesting this will now finally! ramp up recommendations for "self-isolation" - which I think is a better term than "social distance" - because it puts the responsibility where it belongs - aka your self.

It's difficult kvd. I was reading an article in the Lancet that you might find interesting -https://www.thelancet.com/journals/lancet/article/PIIS0140-6736(20)30567-5/fulltext?utm_campaign=tlcoronavirus20&utm_content=120403755&utm_medium=social&utm_source=twitter&hss_channel=tw-27013292

I noticed from a discussion on the DE Stevenson group that a lot of US people are self-isolating. The group mainly falls in the older and therefore high risk category. The difficulty with self-isolation is maintaining it. Self isolation for a period makes sense if there are local cases, but if not how do you maintain it until there are local cases? I was thinking from some of the descriptions that they were effectively firing their main bullet in advance of need. Mind you, I would be more worried if I was in the US. They have such an expensive and skewed health systems.

From a practical perspective, I did a food stocktake yesterday. I have more than two weeks supply including toilet paper! if push comes to shove although the lack of green veg and fruit might become an issue. Meantime, I am simply topping up as I go along to maintain the buffer. I cancelled the lecture I was to give yesterday because I had a cold. I have always had reasonably good personal hygiene.

Next week I have a funeral, a biggish one, as well as several meetings. I will go to these. I'm not going to put my life on hold in advance of real need. Then if I have to do more I will be on a position to do so.

I am more worried about the kids. Helen and Christian are in Copenhagen. I messaged Helen yesterday when the news broke about the Danish restrictions. I actually knew as much as them. Christian has been asked to work from home for two weeks. Helen is due to fly to the Dominican Republic today for two weeks staying in a friend's house and is monitoring travels arrangements. I was a bit concerned partly because she might end up stranded, not so much on the health issue. Denmark has far more cases!

Jim, I don't want to take up your entire blog with my layman's thoughts on this epidemic - but suffice to say, I have been following it quite closely since late January in order to keep myself informed of the ramifications for myself, being of an age which is at the lower bound of what I'd term "serious susceptibility".

My thoughts at this point can be summarised as:

1) My business, though small, is weirdly interconnected with people all over the world - as clients, or client-contacts - strange as that seems.

- A couple will return from the UK in about 2 weeks, having spent a good deal of time at large gatherings, including Crufts dog show;

- another client called through yesterday with his two just-arrived German nieces, on his way to Sydney for a week in a hotel, for some city sight-seeing;

- another client visits weekly. She is a doctor, engaged at 3 different Sydney hospitals. Her daughter returns from study at LSE in a week's time. To her credit, she has decided to suspend further visits for the moment.

2) like 'flu it is almost certain that I will, at some point, become infected.

3) My business would effectively cease to exist during the time of my infection/hospitalisation. I am not alone in this; it applies to any "one-man show" as you'd appreciate.

4) I wish that eventuality to be not earlier than 2021, by which time knowledge (and possibly even vaccines) will be greater, as to care and treatment.

In your case, from everything I've read, the possible effect on your children is mild, so, while nobody wants to catch it, they are of an age to survive it easily, and hence be somewhat protected for future waves, assuming no mutation of this virus.

I'd be more worried about your good self, than either your or my own children and now grand children.

ps - yes, that Lancet reference is very considered. Many thanks.

That's a very interesting comments, kvd, showing the web of unseen interactions. I may at some point become infected too, of course. Unusually, I have never caught flue (well, maybe a long time ago) so that probably makes me a bit blase. Still, I have done what I can and am fatalistic. With eldest, Denmark closed its borders while she was in the air. She has a work visa so should be able to get back in (they may have opened the borders anyway by then) but may then have to go through a fortnight in home isolation.

Finally, a figure I've been interested to see instead of just "confirmed cases":

"So far, more than 81,000 tests have been undertaken with 414 Australians returning positive results"

- I make that about 0.5% infections, and bear in mind one could also assume that those tested are probably the "most likely" candidates, such as the close personal contacts of actual confirmed cases?

One half of one percent in the possibly most vulnerable group?

hi kvd. I'm not sure how much to read into that statistic. The tests have been spread out over time, so one would need to know the changing incidence. I'm also not sure of the statistical significance - this is partly a question of the test population, partly maths that I haven't worked out! But I agree that it does provide a sense of proportion

Hi Jim, I hope you are just fine amid the corona virus pandemic.
Luckily, your city was relatively safe. Indeed human mobility is something that local governments must pay attention to.
Btw... why is toilet tissue as if it's a basic need there?

Hi Tikno. Lovely to hear from you. I hope that you and yours are all safe. Armidale and its immediate area is, touch wood, relatively safe. Damned if I know on toilet paper. It's not just Oz. There must be months stockpiled! All this is creating funny supply chain issues. There was a rush on mince, production increased, and now stores have put mince on special to try to clear the surplus!