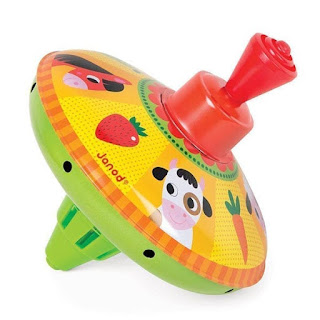 As children, David and I loved our spinning top. Made of tin, it had a plunger that you pressed down sending it spinning wildly across the floor. It's long gone now, finally breaking from over-use.

Just at the moment, I feel like that top, spinning around in response to events. It makes we wonder what the longer term effects of covid-19 might be. Will there be basic change, or will the top having spun simply fall over a little distance from where it began its journey?

I think that a few things are reasonably clear.

At global level, the epidemic has continued the process of US withdrawal from world leadership. Like most countries, US politics is inward looking, focused on domestic issues and responses. The sheer size of the US has made this focus particularly strong, although you only have to look at the Australian media response on particular issues to know that it applies here too.

I have to be very careful in my comments on the US for, like most of us, my views are coloured by my reactions to President Trump. The US decision to withdraw at least temporarily from the WHO at a time of crisis forms part of a pattern of retreat. Whatever the WHO's weaknesses may be, it is the only global body capable of providing a degree of global coordination at a time when many countries are turning inwards, focused on domestic threats.

I would like to think that the US withdrawal will force other countries collectively to step up, but I think that's naive, at least in the short term. A fair bit of the discussion has centered on a US v China trope, including suggestions that China will use the opportunity to try to extend its international reach. Maybe, but I suspect that this is a second order issue. The real issue is the overall impact of the virus including government responses.

At this point we simply don't know how far the virus will spread globally with countries at different stages in the outbreak. We don't know what the final human and economic impact will beyond the fact that it is and will continue to be enormous. We have never had a shutdown like this before.

Comparisons have been made with the Great Depression. That's fair enough in providing a rough measuring block in terms of unemployment and resultant social misery. It's fair, too, in that policies adopted for national purposes fed on each other to create a downward spiral, replacing a previously globalised trading system with national autarky. There is also an uncomfortable similarity in that US actions based on something very similar to the Make America Great Again rhetoric played a major role in worsening the Depression.  All this said, there is one key difference.

The Great Depression was a result of economic forces whose impact was accentuated by conflicting national trade and economic policies. This economic shutdown results from conscious decisions made on health grounds. The immediate economic effects may be somewhat similar, but the causes are different, as are the economic responses, with governments seeking as best they can to cushion at domestic level some of the more dire economic and social impacts.

While this domestic focus is understandable, I think that the most important issue is the decline and potential collapse of the global economic order that has underpinned growth since the Second World War, in so doing lifting hundreds of millions of people out of poverty.

There has been considerable debate about the virtues of globalisation and freer trade and investment. Globalisation has been in retreat for some time, attacked from left and right. Now covid-19 has turned retreat into at least short term rout.

We can see the impact if we take the Australian trade data as an entry point. The data comes from a DFAT (Department of Foreign Affairs and Trade) publication Trade and Investment at a Glance, 2019.

Starting with services exports, our top two exports are:
These exports have been effectively stopped in their tracks. 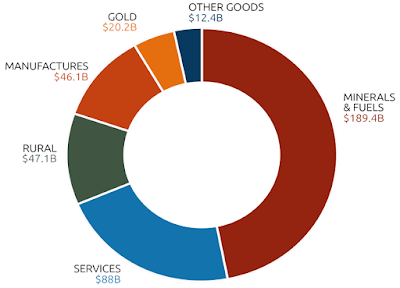 We can get a further feel for this if we look at the graphic which shows the broad sectoral composition of Australian exports in 2017-2018.

You can see the dominance of minerals and fuels.  The services exports which form the second largest component are heavily influenced by education and tourism Without having analysed the remainder in detail, I think that they depend in large part on travel and the movement of people to service international market places are have therefore also been heavily affected by covid-19 restrictions.

Australia has benefited greatly from globalisation including the rise first of Japan and then the Asian tigers followed by China. Now with globalisation in reverse we are exposed. If you take coal out, we are very badly exposed. Those sectors of the economy that depend upon taking in each other's washing, the consumption expenditure that forms such an important part of GDP calculations, are all vulnerable.

I think that it pays us all to think about how we actually preserve global trade, investment flows and indeed the movement of people as we come though this to the mutual benefit of all.
Posted by Jim Belshaw at 11:43 am

Trust me to comment on the least important part of your post, but then I can't pretend to any kind of expertise in the substantial bit. But yes, I had a top like that. And it hummed. Loved it!

:) Good morning Neil. I suspect most of us did!

I heard that Australia tend to follow the USA's desire for investigation into a laboratory in Wuhan, China.
On the economic side, the income from educational services, wine, meat, have a lot to do with China.
It seems that Australia is faced with a difficult choice after China plan to embargo such trade.
I don't know if the Trump's blame game, and also Australia's plan is right amid corona pandemic where the whole world should focus on overcoming it.

I think that the the way that Australia phrased its call for an inquiry was unwise, the Chinese response likewise. It is a distraction. There does need to be some form on inquiry when all this is over not to apportion blame but to learn the lessons. There is some remarkably strange conspiracy stuff around.

The Trump's blame game feels more towards political interests in finding a scapegoat when many American people questioned the way / his competency to overcomes corona pandemic, also considered as to maintain his image for the next election. That's what the spirit which was interpreted by China.

I worry that if Trump's political enthusiasm, followed by Australia, continues to call for this, then China will asking the same way for the Ebola, MERS, HIV, Bird flu, H1N1 outbreak.
That can become "Accusing Game" that ended with the "Game of Throne".

I agree to your point "to learn the lesson" together, but using the health approach, not political approach, so each party can feel better.

Please read the link above. You will feel the political flavor behind it.
Sadly, Australia tends to follow Trump's political desires, rather than prioritizing the call for joint efforts to overcome this pandemic.
What do you think about this, Jim?

It was interesting to read all those reports together, Tikno. I can see why the media would get a little tired of reporting him. On Australia, the Government rhetoric is more restrained and focused. By contrast, the Chinese rhetoric on Australia has been more extreme than that applied to the US! Australia remains committed to the WHO while accepting that there is a need for reform.