The scale of the short term economic impacts from covid-19 and associated shutdowns are becoming clear. They were always expected to be substantial even with the cushioning measures introduced by national governments.

In a short BBC story (30 April 2020), Andrew Walker reports that a first estimate of Eurozone GDP between January and March showed a contraction of 3.8%, worse than during the financial crisis. 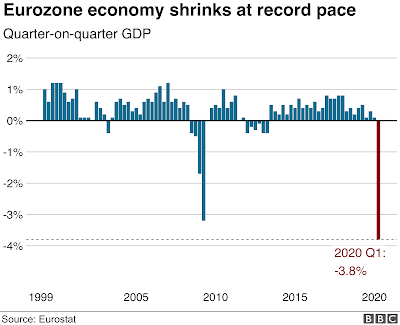 In the case of France, the 5.8% decline in gross domestic product (GDP) was the largest the quarterly series has recorded since it began in 1949. Two other large economies have also published first estimates: Spain saw a contraction of 5.1% while Italy's economy shrank by 4.7%.

In China, CBNC reported (16 April 2020) that in March quarter Chinese GDP contracted by 6.8% in 2020 from a year ago. Domestic downturns flow to other nationals through trade effects. As an example, Xinhua reported (30 April 2020) that international brands had cancelled textile orders with Bangladesh suppliers worth 3.18 billion U.S. dollars, a major hit to the country's economy.

In Australia, the Grattan Institute has developed a useful economic tracker that aids measurement of the economic effects of covid-19 and associated measures. This chart, for example, shows the proportion of jobs lost/gained by industry.

In considering the economic impact of covid-19 we need to recognise that we are dealing with a multi-stage process. There is the first impact of the covid-19 shutdowns, cushioned to some degree by stimulus measures. Then comes the progressive re-opening of economies, followed by longer term adjustments. Jobs lost are not so easily regained. Many businesses will be forced to close. Others including financial institutions will be left in a weakened position. The ability of Governments to provide further support will be increasingly constrained by debt burdens.

In countries like Australia, one critical point will be the ending of current support measures. What will the economy look like one stimulus is withdrawn?

Hi Niar. Lovely to hear from you. All is well here in beautiful Armidale. I hope likewise for you