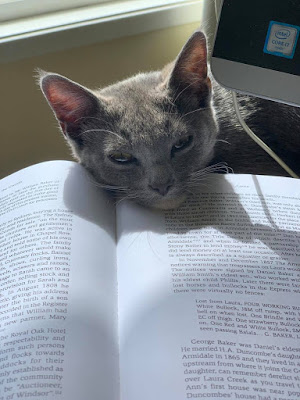 I have a certain sympathy for Deputy Prime Minister Barnaby Joyce who was fined Monday for his failure to wear a mask. He had filled the car with petrol and then went inside the service station to pay mask-less. Someone reported the matter to the police.

We haven't had to wear masks in our area. The decision to mandate them from Sunday despite the absence of covid here was taken as a consequence of the current Sydney outbreak.

Sunday morning kitten Clyde was found paralyzed and unmoving on the bathroom floor requiring an emergency visit to the vet. The vet suggested a visit to the next door McDonalds for coffee while she ran tests. We entered and after a little while were told that they could not serve us if we did not have a mask. Wandering downtown I was able to get a coffee at one of the stalls at the monthly market. I noticed that there were more masks around although wearing was still patchy.

I still wasn't sure what was going on. Coming home, I called in at the small corner store then at the little bottle-oh. In both cases I was served but told that masks were now mandatory. Now there was a problem. To get masks at the chemist I had to enter the shopping centre and then the chemist but could not do so without a mask! Finally, I found an old one and using that acquired some disposable masks.

Monday I had to buy something, dashed out, reached my destination and realised that I did not have my mask.  I came home. Had I been going to a self-serve petrol outlet I might have found myself in the same position as Mr Joyce, filling and then unable to pay without breaching the regulations.

As I said, I have a certain sympathy for Mr Joyce. However, there is a broader issue, the break-down in the social consensus that has made covid restrictions successful. All jurisdictions bear some responsibility for this. Some examples to illustrate.

"I don't want an 18-year-old in Queensland dying from a clotting illness who, if they got COVID, probably wouldn't die.

"We have had very few deaths due to COVID-19 in Australia in people under the age of 50 and wouldn't it be terrible that our first 18-year-old in Queensland who dies related to this pandemic, died because of the vaccine.

The issues associated with AstraZeneca have been widely covered. By the time I received my first injection I was worried about side-effects, but decided that the risk was worthwhile given my age. Since then, official advice has varied although the epidemiological evidence has not really changed.

The emotional intervention by Queensland Chief Health Officer Jeannette Young following the Prime Minister's announcement that AstraZeneca could be accessed by younger Australians was a dramatic over-reaction that, to my mind, reflected the pressures upon her as well as the political stance adopted by the Queensland Premier.

The take-home message that the risks of a younger person dying from covid were less than those rare reactions from AstraZeneca strikes at the heart of the vaccination program, feeding into the narrative that the AstraZeneca vaccine is unsafe. It also feeds into the broader anti-vaxxer story that all vaccines are unsafe. If the risks of a young person dying from covid are lower than those associated with vaccination why bother getting vaccinated? Why take the risk?

The issue is not helped by disagreements among professionals. Each jurisdiction states that it relies on its health experts, that its policy decisions are based on health advice. Leaving aside differences among experts, this statement is misleading in that the decision on that health advice is affected by political circumstances and judgements. This is not a criticism, simply an observation.

The requests from Queensland, Victoria and Western Australia to reduce the quotas on overseas arrivals in Australia are inherently political. Take Queensland as an example.

The public health question involves an assessment of risk and how that risk might best be managed. The political response focuses on the likely community impact and associated costs. These issues involve political as well as public policy responses including how much risk the community is prepared to bear as well a public concerns about preferential treatment for particular groups. .

Simplifying, the Prime Minister's core announcement was an indemnity scheme that would make it easier for those under 40 to accept AstraZeneca should they choose to do so, The responsibility here rests upon individuals who have been advised of the risks by their doctors. This seems perfectly appropriate to me.  Since the announcement, there appears to have been a rush of younger Australians to get the AZ jab. This makes perfect sense to me.

Each Australian jurisdiction from the Commonwealth down focuses on those presently living and especially voting  within its jurisdiction. This makes perfect sense, but ignores changes elsewhere in a world that is now opening up despite the virus. To many younger mobile Australians, it makes sense to get vaccinated now with AZ not just because it reduces their immediate risks but because it will enable them to travel when the borders open - as they must.

Oh, just to finish, Clyde's x-rays suggested a possible spinal fracture or head damage from a fall or alternatively some form of thrombosis, The prognosis was grim. By nightfall, he was showing some sign of movement although the vet warned he might not last the night. By morning, he was moving and ate something, although he seemed to suffer from sight loss. By the time we picked him up, he was able to walk and was complaining. The vets were amazed!