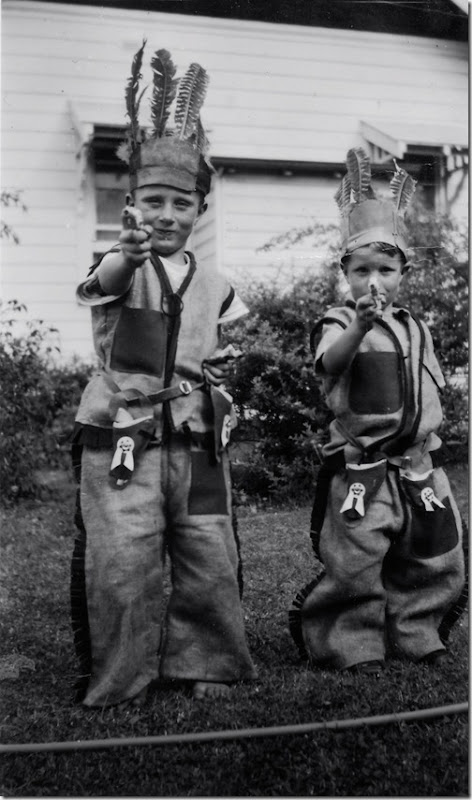 I was going to write something serious today on left versus right. My heart wasn't in it. Instead, a very short nostalgia piece.

This photo is from Christmas 1951. Brother David and I had been at Mum because we wanted a cowboy and Indian outfit. So she made us one for Christmas.

Cowboys and Indians were big things then, although this influence was not always welcomed.

During the 1930s the New England politician Sir Michael Bruxner, then NSW Deputy Premier and leader of the NSW Country Party, had complained about the American influence, about the way cowboy was replacing stockman in urban parlance, about the introduction of the term rodeo.

Our outfit was very much an Australian variant made from local materials easily available to Mum including hessian bags. Still, it had holsters and feathers!

Growing up, westerns were a popular genre at the local cinema and one of the staples at the local news agency. Then they vanished.

Jim don't know if you ever had one but my most treasured possession at that time was a Davey Crockett hat complete with tail. My brother's Labrador stole it then ate it and growled at me when I tried to take it off her. Vivid early childhood memory. Stupid dog. But anyway cowboys and Indians was very big back thereabouts as you say.

Davy Crockett much later; 1955. Also, who can forget the much desired (didn't have one!) Hoppalong Cassidy tent. We had a much loved and extremely patient ginger cat, who spent some years doubling as a mountain lion/couger/puma. Sat arvo matinees had much to answer for.

Anon is correct as to dates. "Me hat got et" in either 56 or 57 based on the house we were living in. I had a pair of H C chaps a little after that i think. Proper leather. Cost a fortune these days.

Anon, you reminded me of that damn song! We didn't get to so many matinees. Parents didn't approve of us going weekly.

Those poor but patient animals. Tents plus chaps indeed. I actually wasn't so keen on HC.