Thursday meander through the blogging world

I decided this morning to spend the time that I would normally spend writing a post to reading my fellow bloggers, while also doing some tidying up to my blog list. As before, I will give you some links so that you can follow up if you are interested.

Just to start, a photo from Mark's Clarence Valley Today. As Mark notes, Bangalow is a pretty village located between Byron Bay and Lismore in the Richmond Valley. It was once the centre of a thriving dairy industry. As dairying declined and coastal tourism boomed the main street has transformed from the usual collection of small family owned shops into very pricy boutiques and cafes; organic or locally sourced is the de rigueur signage. 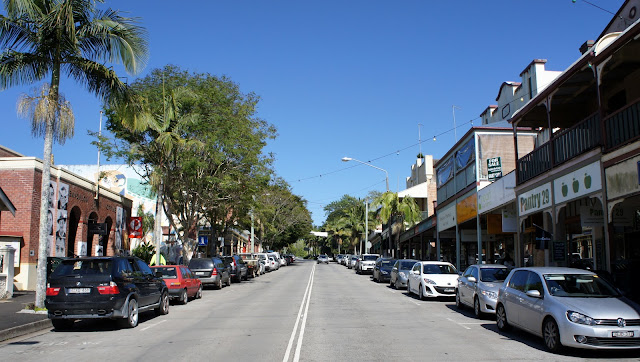 As I noted elsewhere, Northern Rivers (NSW) Geology is a new blog dealing with the geology of the area that Mark covers in his photos. Very useful from my perspective.

Lorenzo has had another guest post on skepticslawyers, Why did the Middle East select for monotheism? – Guest post by Lorenzo. Its an interesting post, but one I had problems with. Among other things, I am not convinced that pastoral societies have a natural tendency to monotheism.

In the The Lives of Children, Will Owen reviews Growing Up in Central Australia: new anthropological studies of Aboriginal childhood and adolescence (edited by Ute Eickelkamp, Berghahn Books, 2011). It's an interesting review. I tend not to write much on Aboriginal history or policy outside New England or NSW more broadly because I lack knowledge. However, I am interested.

EthnoSense is another anthropology blog, this one written by a group of young ethnographers. Browsing, I was struck by Generation (Hard) Y(akka).

When I applied for the overseas volunteering opportunity, I was struggling to find employment as a recent double-degree graduate. I completed my studies at the end of 2008. Just after the GFC unleashed itself on the world.

It’s tough being a Gen Y graduate. There are more university graduates in the jobmarket than ever before. Competition is fierce

I felt for the writer.

There is quite a bit around in the bloggosphere at the moment on issues associated with income and wealth distribution. Matt Cowgill's Inequality and the top 1% in Australia is a well written example. Hat tip to Kim on Larvatus Prodeo for the original link.

One point that I have tried to make in my own writing is the need to drop below the statistics to look at the question of job security. Even if average incomes increase in particular population cohorts, the effects of this may well be more than counterbalanced if, as has happened, job security declines.

There is a link between these discussions and yesterday's post, Economics, Say's Law & the paradox of thrift. You see, as job insecurity rises, people need a bigger liquid asset pool to protect themselves in the event of job loss. Of itself, this tends to increase savings rates.

In A peek behind the News paywall, Craig Wilson looks at News' plans to introduce pay for view. Craig also points to a new News Ltd site, The Future Of Journalism, that deals with some of the issues. I have written on some of these questions, most recently in Belshaw's World - caught between a tweet and a print place.

Ramana is slowly returning to blogging following his operation. I could not resist stealing this photo; it made me laugh.

The steel city of Wollongong lies south of Sydney. Since Neil Whitfield (Ninglun) moved there from Sydney's inner city, both his main blog and photo blog have had a Gong focus.

Julia wows The Gong reports on a visit by the Australian Prime Minister to the city with particular reference to the National Broadband Network.

Much of the discussion on the NBN, Australia's largest public works project,  has centered on two themes. The first are the economic issues - competition policy, the economics of the network itself, costs and benefits. The second are the perceived benefits. Discussion here is often couched in generalities, partly because no one actually knows.

As I often do, I have tried to localise these issues. This partly reflects my own geographic focus, but I also find it easier to understand broader results through specific examples.

It is still too early to make judgements, but I am following the position in my old home town of Armidale quite closely as an early release site with attributes (an existing relatively sophisticated user base so far as online is concerned) that should favour take-up. My feeling is that the next two years will give us a pretty good feel as to the dynamics.

Well, that's the end of my meander for the moment.