Continuing the story of our Greek trip from Lindos & its acropolis, we drove out of Lindos in the late afternoon to return to Rhodes. As I said at the end of my last post, I am annoyed that I did not visit the acropolis myself. Looking at Clare's photos reminded me of just what I missed in terms of overlapping history.

This shot shows the classical influence: 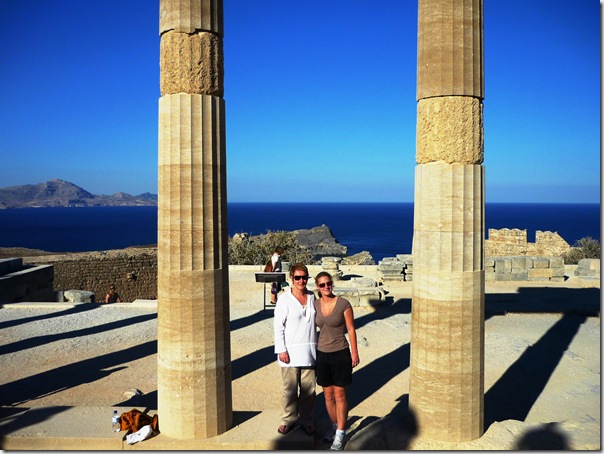 This shot shows the much heavier Frankish remains. I don't know whether or not its prejudice, but I think that the gradation in fineness from the more delicate Greek or Hellenic through the Roman to the Franks (the generic name given to those from the west) reflects character! 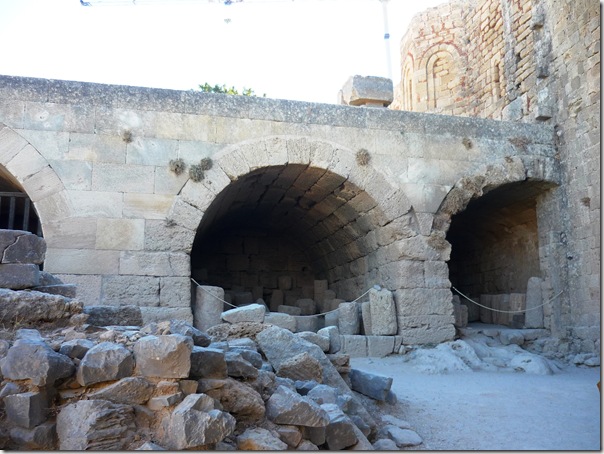 The run back to Rhodes took us through country we had already see.n I was again 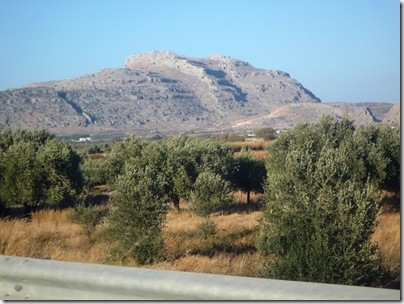 struck by the barren nature of the countryside, as well as the hints of historical remains.

Back in Rhodes, we dropped the car off and walked back though the walls into the old city. After cleaning up and a drink, we walked down to a local restaurant for dinner.

I haven't spoken a lot about food on this trip, largely because I am not really enamoured of Greek food.

That night we had decided to go to a place that we had seen before and had got chatting to the owner. I was the one who pushed us into it, for the owner had been quite helpful. Talk about a disappointment! The food was poor and overpriced.

The next morning dawned bright and hot. After breakfast, we walked downtown. The girls decided to get a drink, while I went off to try to find an internet cafe.

One of the things that you notice about old Rhodes as compared to the other Greek Island towns is that it's bigger and just so much more spread out. 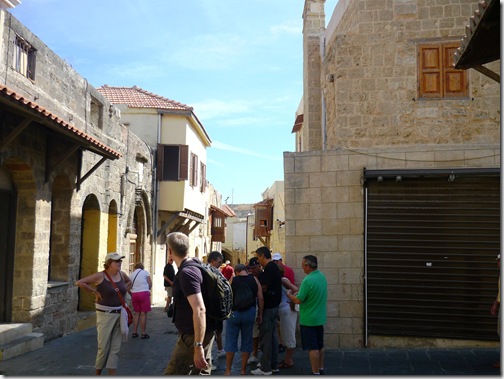 You don't have quite the same concentration of shops or cafes or indeed sometimes people. You need to know where you are going and have to walk longer distances.

I chose this photo to illustrate the point simply because it shows somewhat lost and confused tourists!

I walked and walked in search of my internet cafe. It was bright sunlight, very hot. Finally I found a cafe that advertised internet connections. When I asked the price, they said that it was free if I ordered something. It was hot, I was going to be there for a while, so I asked for a large beer. Silly me!

The beer arrived in due course in a very large glass boot. As best I could work out, it contained at least three full bottles of beer. Talking to the girl beside me who was drinking from a very large glass, I asked her what she had ordered. A medium beer she said!

My new friend was not a happy chappie! Apart from the beer, she had also asked about printer connections to be told that they had them. They did, but no one thought to mention that the printer was out of paper!

I drank some beer, checked Facebook and emails, then wrote a short post. By then I had drunk half the beer, but could not manage more without getting far to tipsy for a hot Monday in the middle of the day. I asked for the bill, eighteen euros!! This was a bit of a disaster for someone whose already tight budget was badly  overstretched.

I walked outside feeling very silly. It really was a con, but my own fault for not doing the proper checks first. Outside I paused to take a photo, creating some concern among the proprietors. Don't visit! 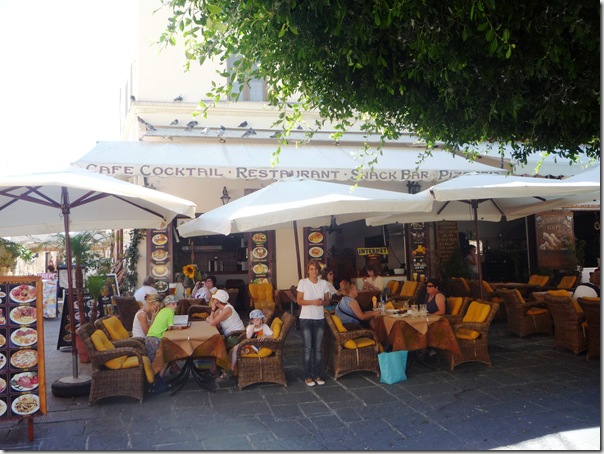 After this experience I walked back to the hotel and had a rest. After writing up some notes rejoined the group for dinner. We had been going to go to a French restaurant 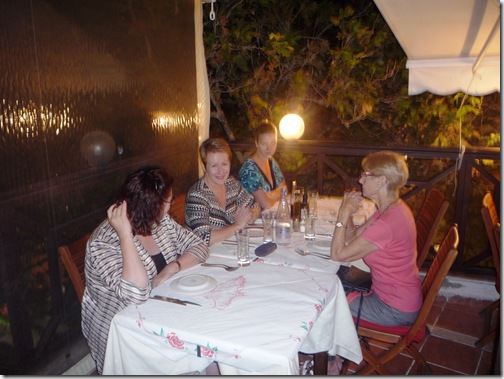 for a food break, but found that it had closed two years earlier following the death of the owner. Instead we chose to go to Taverna Mama Sofia's for our last evening meal on Rhodes.

Mama Sofia's was just up  the road from our hotel. We sat in the roof garden overlooking the street and had a very pleasant meal.

I was still cranky about the morning's internet experience. However, under the influence of food, wine and conversation I gradually relaxed and ended up thoroughly enjoying the evening.

Tomorrow Athens and a new phase in my exploration of Greece's past and present, the classical world, the Peloponnesian Wars and current economic troubles.