Unravelling the secret history of the plague

The Black Death, bubonic plague, reportedly reached the trading city of Caffa in the Crimea in 1347 from its original base in China. There as part of a protected siege the Mongol army under Jani Beg, itself suffering from the disease, catapulted the infected corpses over the city walls to infect the inhabitants. From there as well as other places, the disease spread throughout Europe.

This was not the first outbreak of bubonic plague.

The Plague of Justinian in the 6th and 7th centuries was the first known attack on record. From historical descriptions, as much as 40 percent of the population of Constantinople died from the plague. According to Wikipedia, modern estimates suggest half of Europe's population was wiped out before the plague disappeared in the 700s. The damage done to the Byzantine or Eastern Roman Empire was profound and long lasting. 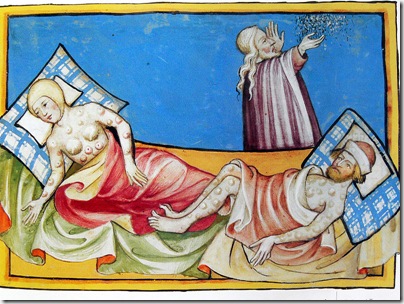 The second major outbreak that began in the late 1340s was just as devastating. The Black Death is estimated to have killed 30–60 percent of Europe's population, reducing the world's population from an estimated 450 million to between 350 and 375 million in 1400.

This illustration of the Black Death is from the Toggenburg Bible (1411).

The effects of the Black Death were profound, etching itself into the culture and psyche of Europe. You get something of a feeling for the fear from the panicked reaction in Sydney to the 1900 outbreak of plague. These photos from NSW State Records provide a visual picture of the response.

The disease itself is enzootic (commonly present) in populations of fleas carried by ground rodents, including marmots, in various areas including Central Asia, Kurdistan, Western Asia, Northern India and Uganda. yet despite this, and despite later epidemics including the 1890 Chinese pandemic, the virulence of the plague seemed to decline compared to the devastation of the Black Death.

Now, in a remarkable piece of scientific investigation, a scientific team has been able to reconstruct the DNA of the actual plague that devastated Europe and other places in the fourteenth century. You will find the McMaster University press release here, the Nature article reporting the results here, a Nature video here, and the transcript of an interview with one of the team here.

Now the striking thing about the results is that they suggest that the Black Death was actually very similar, perhaps identical, to the current variant of the disease. How, then, do we explain its previous virulence?

Pandemics are generally multi-factorial, drawing their virulence from a combination of causes.

The long period between the Black Death and the plague of Justinian means that there was probably very little natural immunity to the disease. The combination of population increase with climate change, what has been called the little ice age, meant reduced food supplies, higher malnutrition, making people more vulnerable to disease. Poor hygiene and crowded conditions created an environment that allowed the disease to spread.

The third plague pandemic that began in China in 1855 and then spread around the world (the Sydney outbreak was part of this pandemic) affected India especially badly, with an estimated 12.5 million deaths. Again, you have concentrated population. According to the Wikipedia article, the strenuous efforts by the British authorities to control the Indian plague created strong local opposition and became a feature in growing Indian nationalism.

On 22 June 1897, the Chapekar brothers, young Pune brahmins, shot and killed W. C. Rand, an Indian Civil Services officer acting as Pune Special Plague Committee chairman, and his military escort, Lt. Ayerst. The government also found the nationalist press guilty of incitement. Independence activist Bal Gangadhar Tilak was charged with sedition for his writings as editor of the Kesari newspaper and was sentenced to eighteen months rigorous imprisonment. He became a living martyr to the struggle for Indian independence.

Can the plague come back? Perhaps not, but it does illustrate the way in which disease can play havoc with human endeavour.