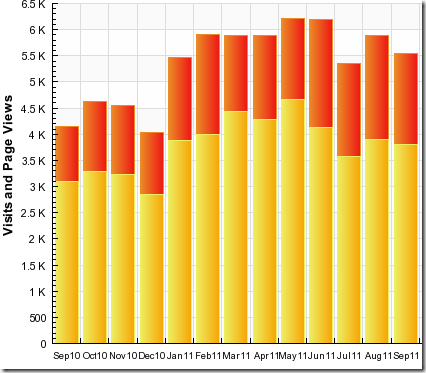 I spent some time this morning just wandering round the blogosphere, catching up if you like. I really enjoy this.

It's also end month navel gazing time. So I should comment on that. Perhaps a bit on both!

To begin, the graphic shows visits (yellow) plus page views (yellow plus red) to this blog over the last twelve months or so. Just jogging along.

Normally, I supply details of the most popular posts during the month. However, this time I am going to leave it for the moment.

Bromberg J’s ruling in the Andrew Bolt matter has attracted a fair bit of attention in the Australian blogosphere. Is this a case of free speech or simply sloppy research? Probably both and a bit more!

For those who are interested, Legal Eagle's A more detailed analysis of the Bolt case provides a good intro, while Skepticlawyers' ‘This is a sad day for adequate research’ includes links to other discussion. My own offerings on this matter were:

My primary focus was not so much the question of racial vilification laws nor whether or not Mr Bolt had breached the laws (this was well covered by others), but on some of the more general issues raised about ideas of Aboriginality. I think the 10 April post is still worth reading -  I was pleased to see that it has attracted 322 visits since publication. That's actually not bad!

Gordon Smith of lookANDsee fame has been fiddling with his photos. This one shows the Gold Coast CBD from the convention centre and has a very science fiction feel. It's interesting, even spectacular, but I'm not sure what I feel about this type of photographic enhancement. 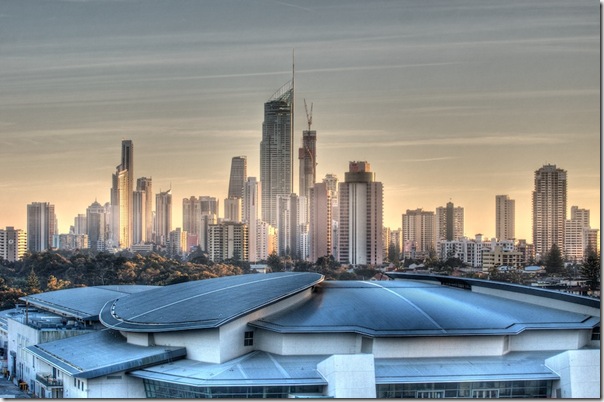 I was a real science fiction fanatic when I was young. Science fiction has largely gone, but the art used in the pulp SF magazines that was then carried through film etc into the present day remains current. It forms part of our visual wall paper. Yet there are some problems with this: I personally lack the capacity to know how to treat such photographs in the way, say, that I can interpret painting; it creates a conflict in my mind between photos as representation and photos as art.

Staying with SF, back in 1961, Kingsley Amis published a survey of science fiction called new maps of hell. That was a pretty fair description. One recurrent theme was the role of the state in making people happy and contented, using drugs and a variety of social engineering techniques; the rebels, the minority, fought against this.

I thought of this when I read Winton's post Which is the more appropriate policy objective: opportunity or contentment?. It made me uncomfortable.

This isn't a criticism of Winton's analysis, simply a reflection on my part: I really feel that some aspects of current perceptions about the role of the state along with certain technological changes are just a bit too close to the 1950s' new maps of hell for my own comfort. The idea that the state should encourage contentment or, as in the case of Bhutan, focus in some way on Gross National Happiness seems to me to be part of a process of transfer of responsibility from individual to authority. I don't actually like that.

Turning to another of my favourite bloggers, I join with others in expressing pleasure that Ramana appears to have come through surgery okay. 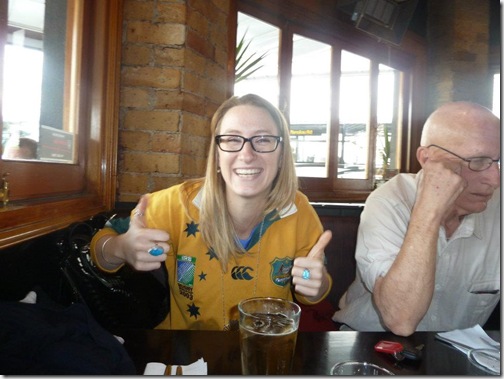 Over on Neil's Final Decade, Neil too has been looking at stats. He is much more colourful in his approach!

However, in an apparent segue, I now want to provide an embarrassing photo from Auckland. I suppose it is embarrassing, but there is a point,

On the left is a good looking, excited, bird. On the right is a boring old fart who looks as though he has fallen asleep at the table! In fact, he is reading a guidebook planning what he might look at and later write about.

Reading some of the really good stuff written by my fellow bloggers, I do wonder just how they maintain the quality - and interest. Time to finish. I now have to do some really boring stuff; tidying up.